STOCKHOLM, SWEDEN, May 13, 2016 –– Valery Gergiev and the Mariinsky Theatre Orchestra – returning guests at the Baltic Sea Festival – this year offering Prokofiev. First, Symphony No. 3 in c minor as a summer evening's concert, and then the day after, family concert Peter and the Wolf narrated by actor Leif Andrée. For the 110 member Simón Bolívar Symphony Orchestra from Venezuela, this is their first time at the festival. The world renowned conductor Gustavo Dudamel, previously chief conductor of the Gothenburg Symphony Orchestra, will lead his orchestra in a unique concert with compositions by Desanne, Villa-Lobos and Ravel. 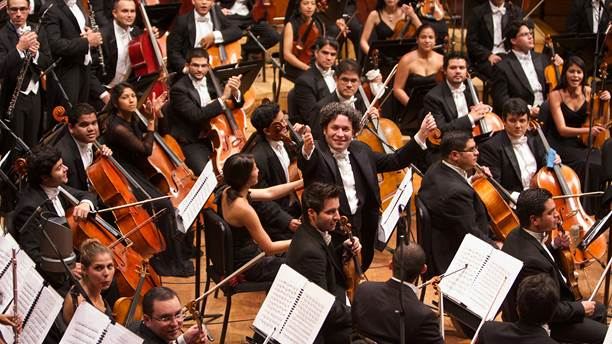 “We are delighted to be able to expand the festival with these fantastic new concerts, that we hope the audience will take to their hearts. New for this year, we are holding a late evening concert with Prokofiev’s Symphony no 3 in c minor by, we dare to say, the world’s foremost Prokofiev interpreter – the Mariinsky Theatre Orchestra lead by Valery Gergiev,” says Michael Tydén, General Manager of the Baltic Sea Festival.

Sergei Prokofiev composed his third of seven symphonies in the summer of 1928 while living in exile in Paris. The symphony is dedicated to his friend and confidant, the composer Nicolai Miaskovsky, and originally premièred on May 17th 1929 in Paris. Prokofiev himself felt it was one of his best compositions.

Peter and the Wolf

Venezuela’s educational program in classical music, El Sistema, was started 40 years ago and has since raised hundreds of thousands of children from the streets. The world-renowned conductor Gustavo Dudamel and the Simón Bolívar Symphony Orchestra are the most famous results of this system. Dudamel is widely known, not least for conducting the music at the beginning and end of the recent new Star Wars movie, and Swedes know him as the previous chief conductor of the Gothenburg Symphony Orchestra, who brought El Sistema to Sweden and Hammarkullen.

Currently, Dudamel is Music and Artistic Director for the Los Angeles Philharmonic and also actively maintains his 17 year long shared trajectory with the Simón Bolívar Symphony Orchestra. This unique Baltic Sea Festival concert is opened with music by Venezuelan Paul Desenne whose compositions draw inspiration from baroque and Caribbean music as well as Heitor Villa-Lobos Bachianas brasileiras, which combines Brazilian music with Bach. After a pause there will be music by Maurice Ravel.

“This opportunity to welcome the Venezuelan Simón Bolívar Symphony Orchestra to the festival means very much to us. It is a one of a kind orchestra in the world with its roots in the musical training program El Sistema, and we can promise an incredibly intriguing program. The Baltic Sea Festival has worked with El Sistema Sweden since 2013 and we eagerly look forward to a future where classical music, joy in music, and the joy of creating something together paves the way to development and community for children and youth,” adds Michael Tydén.