What does ex-president Tarja Halonen, chief conductor Alan Gilbert, Sami pop artist Sofia Jannok and the adventurer Berta Tilmantaitė have in common? Well, they are a few of several well-known people in culture, politics and science who participate in discussions about sustainability, environment and culture during this year's Baltic Sea Festival. 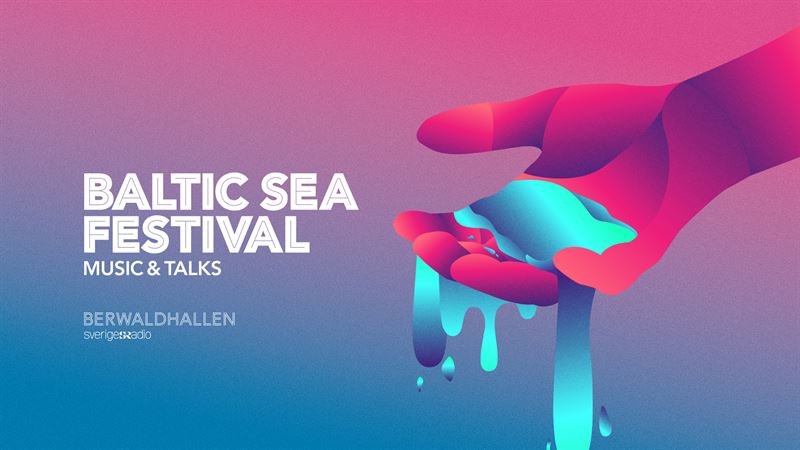 During seven festival days, world-class classical music is combined with seven live-streamed conversations in which some of our region's most interesting personalities meet.

Our common ground is the sea that unites us - the Baltic Sea - and how culture, politics and science should work together to create a sustainable future for the Baltic Sea region. The conversations, which takes place in front of an audience in Hanaholmen – the Swedish Finnish culture center in Helsinki, Arvo Pärt Center in Tallinn, Alandica in Mariehamn and the national libraries in Riga, Vilnius and Copenhagen live broadcast for the audience both in the host cities and in the Berwaldhallen. After the conversation, the concerts from the Berwaldhallen are broadcast live on a big video screen. The Baltic Sea Festival is rounded off with a live conversation between the environmental expert Johan Kuylenstierna and the musician Sofia Jannok in Berwaldhallen in Stockholm.

“We strongly believe in the power of music – and how music has the ability to engage and bring people together. We want the Baltic Sea Festival to be a music festival where also the the personal meeting has a place, and where the conversations highlights different aspects of sustainability within our own region,” says Svein Arne Østevik, Deputy General Manager of Berwaldhallen in Stockholm.

The conversation begins in Copenhagen

The series of conversations start at The Black Diamond, the Royal Library in Copenhagen, with world conductor Alan Gilbert and the musician and TV personality Nikolaj Koppel. Gilbert will return later during the festival as conductor of The St. Matthew Passion.

In Latvia, Dagnija Lejina, one of the founders of the Digital Freedom Festival, and Māris Gailis, businessman and former Prime Minister of Latvia, who also used to be the Minister of the Environment, are taking part in the talks. When it is time for Vilnius, the award-winning Lithuanian journalist and filmmaker Berta Tilmantaitė talks to Lithuanian composer Justė Janulytė, known for her compositions of monochrome music,

In Estonia, the talks are held in the Arvo Pärt Centre with Tarmo Soomere, Head of the Estonian Academy of Sciences and researchers in marine meteorology, and Joonas Hellerma, an Estonian TV personality, film critic and cultural journalist.

Before the closing event in Stockholm the festival stops at Mariehamn on Åland. Here Tatiana Lanshina talks to the winner of the Baltic Sea Award - Jochen Lamp, a German environmental activist and head of the Baltic Sea Office at WWF Germany. Tatiana Lanshina is a research assistant within Economic Modeling of Energy and Ecology and coordinator in Russia for SDSN Youth.

The last talk in the series will be in Stockholm, live in the Berwaldhallen between Johan Kuylenstierna, natural geographer and vice president of the Climate Policy Council, and Sofia Jannok, award-winning Sami artist, songwriter and reindeer owner.

Conversations and concerts, will take place during one or more festival days, and will also be shown on a large-screen in the auditoriums at Södertörn University College, Voksenåsen in Oslo and the Nordic House in Reykjavik. All concerts in Berwaldhallen are broadcast live in Sweden's Radio P2 and several of them also in Europe within the EBU collaboration. Swedish radio journalists Susanna Baltscheffsky, Erik Blix, Hanna Malmodin and Fredrik Wadström participate as moderators of the talks.

Music with a water theme

The Baltic Sea Festival offers world class classical music. This year has a consistent water theme. The festival starts with Benjamin Britten’s Noah's Ark, and the internationally acclaimed climate opera NeoArctic, is performed at the Orion Theater. One of the founders of the Baltic Sea Festival, world acclaimed conductor Esa-Pekka Salonen, returns to the Berwaldhallen with Wagner's The Rhinegold, performed by the Finnish National Opera. Other themed concerts feature Debussy's La Mer and Zemlinsky's The Mermaid with the Swedish Radio Symphony Orchestra under the direction of Klaus Mäkelä. The Swedish Radio Choir gives its own tribute to the victims of the tragic sinking of the M / S Estonia, to name a few of the concerts on the program.

Berwaldhallen is the Swedish Radio’s Concert Hall. Sweden's Radio P2 broadcasts all concerts live from the Baltic Sea Festival. Several concerts are also broadcast via EBU to countries in Europe. The Baltic Sea Festival is an international music festival that was founded in 2003 with classic music as a platform, opening up cross-border dialogues in order to create a sustainable future for the Baltic Sea region. www.balticseafestival.com

Short bios of the people participating in the conversations

Nikolaj Koppel (DK) in conversation with Alan Gilbert (US).

Dagnija Lejina is the regional coordinator for the European Association of Communication Directors and one of the founders of the Digital Freedom Festival. Māris Gailis is a businessman and was formerly the Prime Minister of Latvia and he has also been the Minister of the Environment.
Day 2, Sunday 25 August at 16:00 - live from Riga, Latvia

Berta Tilmantaitė is an award-winning journalist with the whole world as a field of work and known for her photo reports, films and portraits. Justė Janulytė is an award winning composer of monochrome music – music with a dominant instrument type.
Day 3, Monday, August 26 at 18:00 - live from Vilnius, Lithuania

Tarmo Soomere is the head of the Estonian Academy of Sciences and researchers in marine meteorology, and he is also a musician. Joonas Hellerma is an Estonian TV personality, film critic and cultural journalist.
Day 4, Wednesday 28 August at 18:00 - live from Arvo Pärt Center in Tallinn, Estonia

Pekka Kuusisto is a violinist with an international career, known for genre-crossing works. Tarja Halonen was Finland's first, and so far, only female president.
Day 5, Thursday, August 29 - live from Hanaholmen in Helsinki, Finland

Tatiana Lanshina (RU) in conversation with the award winner of the Baltic Sea Award - Jochen Lamp (DE).
Tatiana Lanshina is a research assistant at the Center for Economic Modeling of Energy and Ecology in the Russian Presidential Academy of National Economy and Public Administration (RANEPA), Moscow, and coordinator in Russia for SDSN Youth. Jochen Lamp is a German environmental activist and head of the Baltic Sea Office at WWF Germany.
Day 6, Friday 30 August - live from Mariehamn, Åland

Orionteatern
At 15.00 - NEOARCTIC - A climate-performance opera that cuts straight through our time.
Berwaldhallen
At 16.00 - Nikolaj Koppel (DK) in conversation with Alan Gilbert (US) - live from Copenhagen, Denmark,
At 17.00 – NOYE’S FLUDDE – Britten’s opera about the biblical story of Noah’s Ark, with children, adults, professionals and amateur musicians.

Orionteatern
At 15.00 - NEOARCTIC - A climate-performance opera that cuts straight through our time.
Berwaldhallen
At 16.00 - Dagnija Lejina (LV) in conversation with Māris Gailis (LV) - live from Riga, Latvia.
At 17.15 – THE RHINEGOLD ACCORDING TO SALONEN - Wagner's mighty opera about power, greed, desire and death.

Berwaldhallen
At 16.00 - Johan Kuylenstierna (SE) in conversation with Sofia Jannok (SE) - live in the Berwaldhallen, Stockholm, Sweden.
At 17.00 - THE ST. MATTHEW PASSION - World-class artists in one of history's greatest musical dramas.
At 21.30 - MUSICOMEXP - A musical exploration journey under the sea with sound artist Aurélie Ferrière.

With reservation for changes.