John Festival, President of BlackPearl commenting on Q2 activities indicated that “three years of successful operations at Onion Lake thermal phase 1 has given us the confidence to build and operate additional phases. Both the construction and production ramp-up of phase 2 are ahead of schedule and we are looking ahead to drill and construct another pad site to keep the thermal project at or above nameplate capacity as well as undertaking the optimization work to add an additional 2,000 barrels a day of production. At current oil prices, when phase 2 is fully ramped up, our corporate cash flow should be in excess of $150 million. Our thermal reserves at Onion Lake can sustain 20,000 barrels per day for 20 years.

We are encouraged by the recent developments with respect to Enbridge Line 3 and the Trans Mountain Pipeline expansion, which should address the price uncertainty with respect to both WTI and the heavy oil differential in Canada. Because we continue to report some of the highest heavy oil cash flows per barrel due to the quality of the Onion Lake thermal project we are in a strong position to manage the price uncertainty. Industry reports continue to rank Saskatchewan thermal projects as the most economic thermal projects in western Canada.” 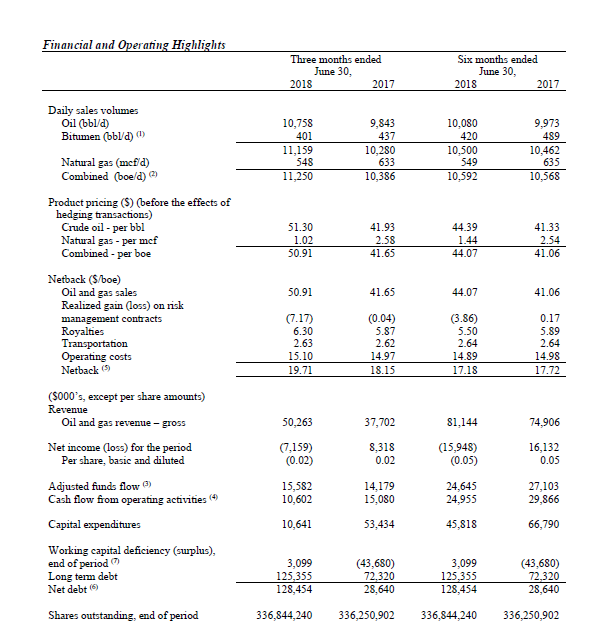 (3) “Adjusted funds flow” is a non-GAAP measure that represents cash flow from operating activities before changes in non-cash working capital related to operations and decommissioning costs. Adjusted funds flow does not have a standardized meaning prescribed by Canadian GAAP and therefore may not be comparable to similar measures used by other companies.

(4) “Cash flow from operating activities” is a GAAP measure and has a standardized meaning prescribed by Canadian GAAP.

(5) “Netback” is a non-GAAP measure that does not have a standardized meaning prescribed by Canadian GAAP and therefore may not be comparable to similar measures used by other companies.

(6) “Net debt” is a non-GAAP measure that does not have a standardized meaning prescribed by Canadian GAAP and therefore may not be comparable to similar measures used by other companies.

Oil and gas production averaged 11,250 barrels of oil equivalent per day (boe/day) in the second quarter of 2018, a 13% increase from the first quarter average. The increase in oil production is attributable to the successful ramp-up of phase 2 production from our Onion Lake thermal project.

Stronger crude oil prices and higher production volumes in Q2 2018 had a positive impact on our adjusted funds flow during the quarter. In Q2 2018 our adjusted funds flow was $15.6 million, 10% higher than the $14.2 million generated for the same period in 2017. Net loss for the quarter was $7.2 million compared to net income of $8.3 million in Q2 2017. The loss was primarily attributable to unrealized losses on our risk management contracts.

At June 30, 2018, the Company had long-term debt of $127 million, made up of $52 million of bank debt and second lien notes of $75 million. The total credit facilities available to the Company are currently $195 million.

We anticipate oil and gas production to average 12,000 boe/d in 2018, which is on the higher end of our previous guidance of between 11,000 and 12,000 boe/d. The increase in production is attributable to the quicker than anticipated ramp-up of production from the expansion of our Onion Lake thermal project. Phase 2 is expected to reach name-plate capacity of 6,000 bbl/d in Q1 2019, a few months ahead of our original estimate. We have maintained our 2018 exit production guidance of 14,000 bbl/d.

We are planning to spend between $95 and $100 million on capital projects in 2018, up from our previous guidance of between $80 and $85 million. The increase in capital spending is primarily the result of optimization work on the steam generation facilities we are planning to undertake at the Onion Lake thermal project that will allow us to increase production by up to 2,000 bbl/d. This work is expected to be completed in the first half of 2019. In addition to this optimization work, we are planning to drill 10 to 15 wells on our conventional heavy oil projects in the last half of the year and construct a sustaining well pad and related facilities for the Onion Lake thermal project, both of which were included in our original capital spending plans. Q3 2018 production from our Onion Lake thermal project will be temporarily impacted as we are required to shut-in some of the phase 1 producing wells during the drilling of the sustaining pad.

Throughout this release, the Company uses terms “adjusted funds flow”, “operating netback” and “net debt”. These terms do not have any standardized meaning as prescribed by GAAP and, therefore, may not be comparable with the calculation of similar measures presented by other issuers.

Operating netback is calculated as oil and gas revenues less royalties, production costs and transportation costs on a dollar basis and divided by total production for the period on a barrel of oil equivalent basis. Operating netback is a non-GAAP measure commonly used in the oil and gas industry to assist in measuring operating performance against prior periods on a comparable basis. Our operating netback calculation is consistent with the definition found in the Canadian Oil and Gas Evaluation (COGE) Handbook.

Net debt is calculated as long-term debt plus working capital for the period ended. Working capital consists of cash and cash equivalents, trade and other receivables, inventory, prepaid expenses and deposits, fair value of risk management assets less accounts payable and accrued liabilities, current portion of decommissioning liabilities, and fair value of risk management liabilities. Management utilizes net debt as a key measure to assess the liquidity of the Company.

In particular, this release contains forward-looking statements pertaining to the expectation that the phase 2 expansion of the Onion Lake thermal project will reach its name-plate capacity of 6,000 bbl/d in early Q1 2019; our 2018 exit production guidance is expected to be 14,000 bbl/d; that the steam facility optimization work at Onion Lake will be completed in the first half of 2019, cost approximately $15 million and potentially add 2,000 bbl/d of production; that when production from phase 2 at Onion Lake is fully ramped-up our debt to annualized cash flow is expected to be less than one and will generate significant free cash; that corporate annual cash flows could reach $150 million when phase 2 production at Onion Lake is fully ramped-up; that the Onion Lake reserves can sustain production of 20,000 bbl/d for 20 years and all the information under Updated Guidance.

The forward-looking information is based on, among other things, expectations and assumptions by management regarding its future growth, future production levels, future oil and natural gas prices, continuation of existing tax, royalty and regulatory regimes, foreign exchange rates, estimates of future operating costs, timing and amount of capital expenditures, performance of existing and future wells, recoverability of the Company’s reserves and contingent resources, the ability to obtain financing on acceptable terms, availability of skilled labour and drilling and related equipment on a timely and cost efficient basis, general economic and financial market conditions, environment matters and the ability to market oil and natural gas successfully to current and new customers. Although management considers these assumptions to be reasonable based on information currently available to it, they may prove to be incorrect.

By their nature, forward-looking statements involve numerous known and unknown risks and uncertainties that contribute to the possibility that actual results will differ from those anticipated in the forward-looking statements. Further information regarding these risk factors may be found under “Risk Factors” in the Annual Information Form, which can be accessed on SEDAR at www.sedar.com.

This is information that BlackPearl Resources Inc. is obliged to make public pursuant to the EU Market Abuse Regulation and the Swedish Securities Markets Act. The information was submitted for publication at 4:00 p.m. Mountain Time on August 2, 2018. 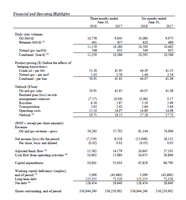