Brighter acquires the company behind jDome Bike Around. 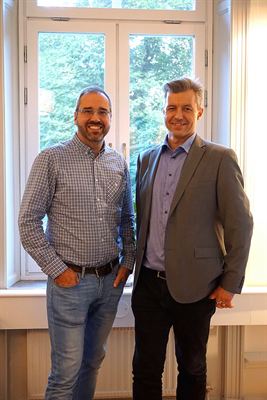 Brighter consolidates its position in data-driven health care and mHealth. The acquisition of Division By Zero AB (publ) expands Brighter’s IP portfolio with unique technology for, among other things, feedback human response to targeted stimuli. Thereby we add another piece to the Benefit Loop™, Brighter’s platform to collect, process, analyze and return data in the treatment chain for continuously improved treatment compliance and recommendation.

Division By Zero's technology is already used in the company's product jDome®BikeAround®, which quickly has become popular for activation and rehabilitation at various medical facilities. The user bikes in a sphere where any environment can be projected around through Google Street View. The implementation was done in collaboration with Google's developers.

“Division By Zero is a company with unique expertise that adds an important piece to the Benefit Loop, Brighter’s platform to collect, process, analyze, and return data in the treatment chain for continuously improved treatment compliance and recommendation. Augmented Reality (AR) and Virtual Reality (VR) technology is attracting many investors and companies like Google, Facebook and Nokia have already started fighting over the market. See for example Oculus that was acquired by Facebook or Google's investments in Magic Leap. Combining AR and VR with the collection and analysis of data can be very interesting”, says Truls Sjöstedt, Brighter's CEO and founder.

“There are not many companies that Google's chairman Eric Schmidt refers to in public, but Division By Zero is one of these few. The work that Division By Zero's Head of Development John Nilsson and his team execute has also attracted considerable interest from many other world-leading companies, including Intel.”

The innovator, and founder of the Division By Zero, John Nilsson, is a creative software developer whose quest for the perfect gaming experience has led to the health product BikeAround, which the company developed together with Hälsoteknikcentrum Halland. Division By Zero has captured the interest from a variety tech companies over the years.

“I look forward to working with Brighter’s skilled developers and expand what is possible to include and extract from the Benefit Loop”, said John Nilsson, Head of Development and founder of Division by Zero.

“Brighter vision of data-driven healthcare with the user's own body and soul at the center is extremely strong. With the technology we developed based on Microsoft’s Kinect technology, we’ve created many new opportunities to get important information from users that can be used to, among other things, adjust therapies, medication and improve tracking.”

Division By Zero AB will be a subsidiary of Brighter AB and will continue to manage the sale of the jDome products BikeAround and WalkAround™. IP and R&D will be transferred to the Brighter AB.


About Brighter AB (publ)
By means of its intellectual property Brighter develops innovations for people who live with a medical condition. We develop the tools that improve the situation and every day lives of individuals. Half of Sweden’s 4.6 million households will be “connected” for home care or through mobile units within five years. Brighter’s objective is to simplify, streamline and strengthen the relationship between patients and healthcare professionals through the development of innovations in the area of mHealth (mobile health) - a market that already today - 2015 - is valued at SEK 120 Billion on a global basis.

The Company's shares are listed on NASDAQOMX First North/BRIG.
Visit our website and subscribe to press releases: www.brighter.se