Islam in a secular Europe 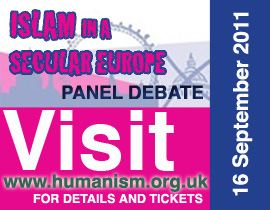 Islam in a secular Europe

Islam in a Secular Europe is the theme of the 2011 annual Secular Europe Campaign debate, hosted by the British Humanist Association (BHA) and the Central London Humanists, in association with Conway Hall. Using a ‘Question Time’ format, this timely debate comes one year on from the Pope’s state visit to the UK, which prompted the largest ever protests against the policies of the Holy See, and demonstrated the strength of secularist beliefs held in the UK. This year’s event will bring together some of the country’s leading thinkers and activists to debate and discuss topics including: whether religious freedom of Muslims in Europe depends on secularism; if veil and burkha bans are secularist or counter-secularist; what the relationship should be between sharia rules and secular law; and if secularism can admit any limitations on freedom of expression in religious matters.

Yahya Birt, the Commissioning Editor at Kube Publishing and co-editor of British Secularism and Religion: Islam, Society and the State;

BHA Chief Executive Andrew Copson commented, ‘Secularism is a way of protecting people of all different religions and those with none. It is vital that public debate and enquiry into secular issues includes people from all backgrounds, and to question how, in a continent that gave rise to liberal democracy and the values of human rights, we can ensure that no one is discriminated against on the basis of religion.  Being able to put questions to this expert panel is a tremendous opportunity for the public to explore the effect secularism has on a multicultural society, and will contribute to ensuring that public policy is informed by open public debate.’

Over 10,000 people attended the Protest the Pope rally last year organised by the Secular Europe Campaign to protest against the State Visit of Pope Ratzinger in the UK, to demand an end to religious privileges and ask that European institutions remain secular.

Full details about the event can be found here: http://www.humanism.org.uk/meet-up/events/view/152

To register your interest for a press pass or for more information, please contact Sara Passmore at the BHA on 020 7079 3586 or sara@humanism.org.uk

Ahead of the event, BHA Chief Executive Andrew Copson is available for interview and comment at 07534 248596 or andrew@humanism.org.uk.

About humanists, Humanism and the BHA:

Throughout recorded history there have been non-religious people who have believed that this life is the only life we have, that the universe is a natural phenomenon with no supernatural side, and that we can live ethical and fulfilling lives on the basis of reason and humanity.

Today, people who share these beliefs and values are called humanists and this combination of attitudes is called Humanism. Many millions of people in Britain share this way of living and of looking at the world, but many of them have not heard the word 'humanist' and don't realise that it describes what they believe.

It is one of the main purposes of the British Humanist Association to increase public awareness of what Humanism is, and to let the many millions of non-religious people in this country know that, far from being somehow deficient in their values, they have an outlook on life which is coherent and widely-shared, which has inspired some of the world's greatest artists, writers, scientists, philosophers and social reformers, and which has a millenia-long tradition in both the western and eastern worlds.

We also hope to give greater confidence to people whose beliefs are humanist by offering resources here and elsewhere that can develop their knowledge of humanist approaches to some of the big ethical, philosophical and existential questions in life. 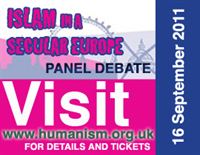