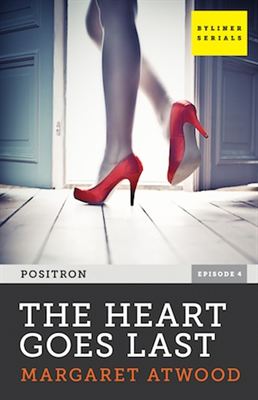 “[Atwood’s] wry humour (especially when it comes to chickens) is as formidable as ever, and as disquieting. How she manages to make so dark a world both comic and terrifying is truly remarkable, a measure of her unerring skill.”

—The Globe and Mail

May 23, 2013—San Francisco—The internationally bestselling diva of dystopias is back with The Heart Goes Last ($2.99), the latest installment of Positron, the dangerously funny Byliner e-serial about life in a Big Brother America of the near future, in which the lawful are locked up and the lawless roam free.

In the seemingly well-adjusted world of Consilience, it’s dawning on the residents that they’ve thrown away the keys to more than their ragged former lives outside the high walls of their gated community. When they volunteered for this new social experiment, they also gave away the keys to their destinies, even their hearts.

In fact, if you ask Charmaine, she’ll tell you her husband is a dead man. Sure, marriage can be murder, but when Charmaine plunged a deadly hypodermic needle into Stan, because it was part of her job—dispatching undesirables in Positron Prison—Stan survived. His former jailer, a libidinous security chief named Jocelyn, had switched out the death drugs for knockout drugs and drafted him into a plot to undo the increasingly sinister social scheme. In so doing, she promoted him from her sexual plaything to full-blown subversive. The underground is housed in a manufacturing plant of one of Consilience’s most successful products: sexbots, made to order.

Love, however, is not made to order, and despite a Darwinian labyrinth of betrayal after betrayal, including wild extramarital encounters and, yes, murder, Stan can’t stop thinking about Charmaine. Not only because someone has requested a sexbot replica of her but because, well, she’s home in a world without homes. In The Heart Goes Last, one of Atwood’s darkest and most deviously entertaining inventions yet, the human heart proves more resilient and true than any mail-order machine.

About the Author: Margaret Atwood is the author of the internationally bestselling novel The Handmaid’s Tale as well as forty other books of fiction and nonfiction. Her most recent collection of stories is Moral Disorder. She has written about utopias and dystopias in In Other Worlds: SF and the Human Imagination. Atwood was awarded the Booker Prize in 2000 for The Blind Assassin. Her novel MaddAddam, the final book of the trilogy that began with Oryx and Crake and continued with The Year of the Flood, is forthcoming in September.

About Byliner: Byliner works directly with the world’s best writers to deliver great stories to readers. We publish original fiction and nonfiction by top authors, including bestsellers such as Amy Tan’s Rules for Virgins, Jon Krakauer’s Three Cups of Deceit, Ann Patchett’s The Getaway Car, Nick Hornby’s Everyone’s Reading Bastard, Buzz Bissinger’s After Friday Night Lights, Chuck Palahniuk’s Phoenix, Alexandra Fuller’s Falling, Richard Russo’s Nate in Venice, and Sebastian Junger’s A World Made of Blood. These stories are written to be read in two hours or less, and can be purchased individually through major digital bookstores. The entire Byliner Originals library is available online to Byliner subscribers, who also get access to premium content from our by-invitation community of writers—including thousands of rarely seen and exclusive stories by bestselling authors.

The Heart Goes Last is available for $2.99 at the Kindle Store at Amazon, and as a Quick Read at Apple’s iBookstore, a Nook Snap at BarnesAndNoble.com, and a Short Read at Kobo.