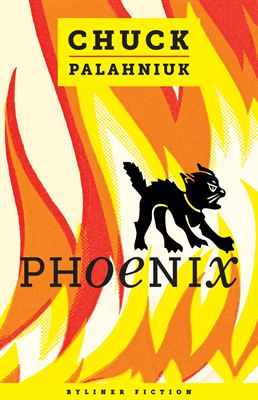 By Chuck Palahniuk,
the bestselling author of Fight Club and Choke

February 15, 2013—San Francisco—No author can shock readers quite like bestselling author Chuck Palahniuk (Fight Club, Choke, Damned), whose meditations on the darkest depths of the American ego have been known to induce fainting fits in his audiences. Palahniuk channels both Stephen King and John Cheever in the singularly sinister and hilarious e-short Phoenix, released today by the new digital publisher Byliner and available in all digital storefronts for 99 cents. Straight from the passive-aggressive front lines of modern marriage, where a wife’s frustration, along with the family cat, become weapons of mass destruction, Phoenix is the Valentine’s gift you never wanted to receive.

Rachel married Ted because he was uncomplicated and loyal. But he was also devoted to his wretched house (done up in black granite, black appliances, even black dishware) and his first love, an old, flatulent cat named Belinda Carlisle. Once Rachel becomes pregnant, Ted reluctantly agrees to move and give up the cat. But the house doesn’t sell, and Belinda Carlisle still haunts their home: every day the creature becomes fatter and more malodorous. When the house burns to the ground in a freak conflagration and the couple’s daughter, April, is born blind soon thereafter, the marriage is never the same again. Only on a business trip three years later does Rachel begin to reckon with the damage.

In an Orlando motel room far from Ted and April, Rachel wonders: Is her simple-minded husband more vindictive and manipulative than even Rachel could have imagined? How far will she go to keep the upper hand—a bit of emotional and physical torture, perhaps? Will she win the battle, only to lose so much else?

If all is fair in love and war, there are few contemporary writers better equipped than Palahniuk to travel the extremes, right to the chilling intersection of “I do” and “I’m damned.”

About the Author: Chuck Palahniuk is the author of Fight Club and Choke, as well as ten other novels—most recently Damned—and two books of nonfiction. Shooting will begin this summer on the film version of his novel of linked stories, Haunted. His forthcoming novel Doomed will be released later this year, as will the award-winning short film “Romance,” adapted from his work by the director Andy Mingo.

About Byliner: Byliner commissions and publishes original stories written to be read in two hours or less. These “e-short” stories are available on phone, tablet, or computer as part of the Byliner subscription service, and can also be purchased individually through digital bookstores such as Amazon, Apple’s iBookstore, Barnes & Noble, and Kobo. Bestselling Byliner titles include Amy Tan’s Rules for Virgins, Margaret Atwood’s Positron, Jon Krakauer’s Three Cups of Deceit, Ann Patchett’s The Getaway Car, Nick Hornby’s Everyone’s Reading Bastard, and Buzz Bissinger’s After Friday Night Lights. On Byliner.com, readers get personalized access to an unmatched library of more than 20,000 fiction and nonfiction stories by the world’s best writers, allowing them to easily find, read, save, and share new and classic stories by their favorite authors.

Phoenix is available for $0.99 as a Kindle Single at Amazon, a Quick Read at Apple’s iBookstore, a Nook Snap at BarnesAndNoble.com, or a Short Read at Kobo. For an Advance Reading Copy or to schedule an interview with Chuck Palahniuk, please contact Clare Hertel at clare@byliner.com; 505-474-6783.

Byliner works directly with the world’s best writers to deliver great stories to readers. Named “one of the 10 Most Innovative Media Companies in the World” (Fast Company), Byliner is a subscription reading service and digital publisher of award-winning short fiction and nonfiction. A Byliner subscription provides unlimited access to more than 30,000 stories by hundreds of bestselling authors, as well as personalized story suggestions based on your reading time and interests. The entire library of Byliner Originals—including bestselling e-books by Margaret Atwood, Nick Hornby, Jon Krakauer, Ann Patchett, Nicole Krauss, Alexandra Fuller, Richard Russo, and Sebastian Junger—is available in the subscription service and through the major digital bookstores.