Second and fourth for Ilott at Masters of F3 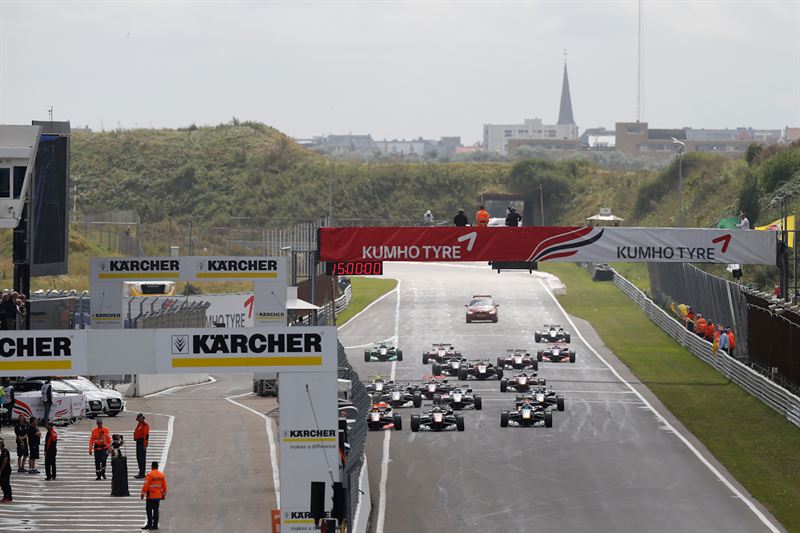 With a pole position and second and fourth, 17 year old Callum Ilott enjoyed success at the Masters of F3 event in Zandvoort, Holland but ultimately hoped for more from the weekend. The annual event, founded in 1991 and counting Lewis Hamilton and Jules Bianchi as past winners, sees F3 drivers compete in two events on an alternative Kumho tyre for the Masters of F3 title.

Ilott was able to seize the advantage in Friday’s Free Practice and qualifying, topping all the sessions and securing pole as comfortably the quickest of the Van Amersfoort Racing entrants. “Overtaking is so difficult at Zandvoort so we needed to get on the front row to have any chance,” says Ilott. “It was a good job from everyone to secure pole and we had a good qualifying set up that we stuck with for the race.”

Unfortunately for Ilott a misunderstanding on the start line procedure meant he was slower off the line than front row rival and eventual winner Joel Eriksson. “Last month when we raced here the circuit used an F1 style start with a countdown of five lights but this time the format changed and the lights just came on and then off,” adds Ilott. “It wasn’t what I and other drivers expected and I was slower off the line and had to slot in behind Joel who reacted better to the shorter procedure.” From then on Ilott was comfortably secure in second for the entire 12 lap race.

Sunday’s race saw competitors line up in the order they finished Saturday’s encounter. Despite starting on the dirty side of the track, Ilott now conversant in the start light procedure, made a better start than pole sitter Eriksson but was squeezed towards the pitwall by the Swede, compromising his run into Turn One and allowing Eriksson and Niko Kari to sweep around the outside at Turn One. A lap later, Sergio Sette Camara was able to pass Ilott and stymied by the nuances of Zandvoort and the difficulties to catch and pass there, the places stayed like that for the remainder of the 25 lapper.

“Pole, a podium and a fourth would normally be a good weekend but I know we can do better so I feel some frustration not to have achieved a little more despite some strong results,” concludes Ilott. "The lights issue in Race One cost me pole for Race Two and it was always going to be difficult from there.  I had to go for the lead at the start of Race Two, rather than accept second and I did not quite make it, so losing another place.  Ultimately we just couldn’t catch the Motopark cars that finished ahead. We’ll look at the data but preparing for Nürburgring and doing well in the main championship is where I’m going to focus from here.”

Based in the UK and still in full-time education at Haileybury, Hertford, 17-year-old Callum Ilott is one of Britain's upcoming young driving talents. At 12, he secured his first British national karting championship and just one year later dominated the international under 15s KFJ category with multiple championship wins and was nominated as the youngest ever WSK Driver of the Year in 2012. Aged 15, he won the CIK-FIA European Karting Championship, the WSK Super Master Series and finished fourth in the CIK-FIA World Championship. Aged 16, Callum was Red Bull’s first ever driver to progress from karts to F3 to race in the FIA F3 European Championship securing a podium at the Nürburgring. In 2016 he will return to the championship with experienced Dutch team VAR.