Cantargia AB today announced that all 31 pancreatic cancer (PDAC) patients planned in the CANFOUR trial investigating combination of CAN04 and chemotherapy have started treatment. In the interim data set, no unexpected side effects have been reported, but notably fatigue and neuropathy were less common than reported from chemotherapy, while neutropenia was more common. With partial responses so far documented in 8 out of 20 (40%) evaluable patients, response rates are higher than expected from historical control data with chemotherapy alone. The responses have been durable for longer than 1 year for 2 of these patients so far. Two other patients have shown strong tumor shrinkage and significant decline in the biomarker CA19-9, after initial progression on CT-scan.

Cantargia develops antibody-based pharmaceuticals against interleukin-1 receptor accessory protein (IL1RAP). The antibody CAN04 binds IL1RAP with high affinity and functions through both blockade of IL-1 signaling and Antibody-Dependent Cellular Cytotoxicity (ADCC). Preclinical data show that CAN04 can increase the efficacy of chemotherapy. CAN04 is investigated in an open label phase I/IIa clinical trial, CANFOUR, examining combination with two different frequently used chemotherapy regimes in patients with non-small cell lung cancer (NSCLC) or PDAC (https://clinicaltrials.gov/ct2/show/NCT03267316) in the first line chemotherapy setting. In a December 2019 interim analysis, response rate was higher than expected for chemotherapy alone.

The 31 patients planned have now started therapy in the cohort investigating CAN04 as first line combination with gemcitabine/nab-paclitaxel, a standard treatment regime for PDAC. The aim is to address the safety, initial efficacy as well as biomarkers in blood and tumor biopsies. The side effects recorded are those expected from the chemotherapy used or CAN04. Compared to chemotherapy alone, side effects such as fatigue and neuropathy have been less frequent while neutropenia has been more common. Neutropenia is managed in line with recommendations with dose reductions and/or treatment with growth factors. These preliminary findings can be explained from CAN04 blocking IL-1 activity and need to be confirmed in larger number of patients.

Currently 15 patients are receiving treatment under the protocol. In a new updated interim dataset, the response rate is above the historical control data of 23%1. So far, 20 patients have been treated long enough for radiological evaluation, 17 of these had tumor shrinkage or maintained the same tumor size on CT-scan during treatment. So far, 8 patients have more than 30% tumor reduction and thereby partial response according to iRECIST. The response has so far been confirmed in a follow-up scan in 6 of these. Notably, two of these patients achieved very durable partial responses for approximately 1 year. Two other patients are also notable; initial radiological disease progression at 2 months, was followed by tumor shrinkage of 39% and 24%, respectively. For these two patients the biomarker CA19-9 decreased by 92% and 71%. The waterfall plot below shows the best tumor reduction observed so far in the 20 evaluable patients. 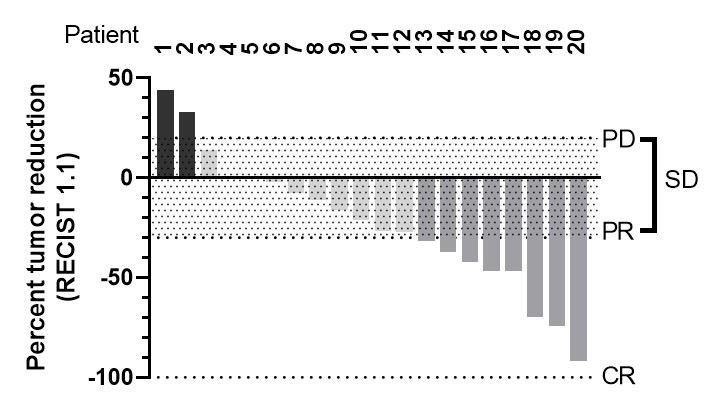 As previously communicated, next clinical development step is 20-40 additional patients to be recruited in an extension phase to get complementary information on dose, schedule, biomarkers and antitumor efficacy to support the transition into a future pivotal trial. In parallel with the extension phase, the results from these 31 patients in the CANFOUR trial will be analyzed. Preparations for interactions with major regulatory authorities are being initiated.

The intention is to present updated data at scientific conferences during 2021.

“Completing the recruitment of the pancreatic cancer cohort is an important milestone. There are several very interesting and positive findings in the current data set and it is of importance to continue studying the long term effects in these patients as well as to gain further information in the upcoming extension phase”, says Göran Forsberg, CEO of Cantargia. “We have initiated the preparations for the next step in the pancreatic cancer development of CAN04 and will communicate the strategies once we have more mature results”

This is information that Cantargia AB is obliged to make public pursuant to the EU Market Abuse Regulation. The information was submitted for publication, through the agency of the contact person set out above, at 16.45 CET on 8 October 2020.

About Cantargia
Cantargia AB (publ), reg. no. 556791-6019, is a biotechnology company that develops antibody-based treatments for life-threatening diseases. The basis for this is the protein IL1RAP that is involved in a number of diseases and where Cantargia has established a platform. The main project, the antibody CAN04, is being studied in the clinical phase I/IIa CANFOUR study with a primary focus on non-small cell lung cancer and pancreatic cancer. The study is focused on combination therapies, but also includes a monotherapy arm. Positive interim data from the combination therapies were presented in December 2019. Cantargia’s second project, the antibody CAN10, addresses treatment of serious autoimmune/inflammatory diseases, with initial focus on systemic sclerosis and myocarditis.

Cantargia is listed on Nasdaq Stockholm (ticker: CANTA). More information about Cantargia is available at www.cantargia.com.