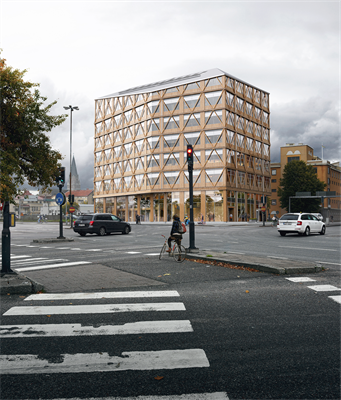 Castellum will construct an office building in central Örebro for the Swedish Police Authority. The building will be constructed entirely of wood and certified in compliance with the new Sweden Green Building Councils (SGBC) certification: NollCO2. A primary objective is for the building to have net-zero CO2 emissions throughout its lifetime. The project is calculated to cost approx. MSEK 225 – including acquired building rights of MSEK 15 – and the investment will result in an annual leasing income of MSEK 15.

“It feels really good to win the confidence of the architectural firm, the municipality and our tenants – the Swedish Police – to construct a unique office building that is one of the very first climate-neutral projects to achieve the tough new NollCO2 certification. We’re now taking a major step in the right direction to build more climate-smart while we contribute to a more sustainable community,” says Henrik Saxborn, CEO at Castellum AB.

“The new police station makes us better equipped for the future. Workplace environment will be improved for our staff, and ultimately this will also benefit our fellow citizens. It feels extra great that the new premises will create minimal impact on the environment,” says Niclas Hallgren.

The NollCO2 certification has been developed by the Sweden Green Building Council as an enrichment level of Miljöbyggnad, BREEAM, LEED and Svanen to create more sustainable buildings with net-zero greenhouse gas emissions during the building’s entire life-cycle. Castellum has participated in SGBC’s development activities related to the NollCO2 certification.

Climate neutrality in the project is primarily achieved by building the core structures in wood instead of the traditional steel and concrete. Utilization of wood means that emissions will be 40% lower compared with traditional construction. A further solution for achieving climate neutrality will be to install sun panels on the roof, in line with Castellum’s sun-panel program, “100% on solar”. In addition to providing the building’s energy requirements, excess energy can be utilized by the community.

The new office structure will be located in the Korsningen city block of central Örebro, where Castellum built the Citypassagen office property in 2019. The building has been designed by Utopia Arkitekter, who won the land-allocation competition and later chose Castellum to implement the project. Construction start is planned for the summer of 2020, with completion scheduled for mid-2022.

“I’m really proud that we’re well on the way with our most sustainable office building ever. We’ll be learning a lot that can be useful for future projects. I’m sure we’ll be seeing quite a few more of these newly certified NollCO2 buildings in the near future,” says Per Gawelin, CEO Region Mitt, Castellum.

Castellum’s climate objectives include becoming 100% climate neutral by 2030, in compliance with the UN climate change conference as well as with national goals for a fossil-free Sweden.

Summary of the project:
Where: Castellum building in the Korsningen city block of central Örebro
Investment: approx. MSEK 225, including acquired building rights of MSEK 15
Occupancy: Mid-2022

Castellum is one of the largest listed real estate companies in Sweden. Property values total SEK 96.3 billion and holdings comprise office, warehousing/logistics and public-sector properties, covering a total leasable area of 4.3 million square metres. The real estate portfolio is owned and managed under the Castellum brand through a decentralized organization with strong and clear local presence in 17 Swedish cities, as well as Copenhagen and Helsinki. Castellum is ranked as the most gender-diverse of 600 listed European companies by European Women on Boards, 2020. Castellum is the only Nordic real estate/construction company elected to the Dow Jones Sustainability Index (DJSI), joining a select group of companies in the world who perform best on sustainability issues. In 2019, Castellum received two awards for sustainability efforts; designated Number One in the world by GRESB for the offices-and-logistics sector, as well as the Level Gold award for sustainability reporting from the EPRA (European Public Real Estate Association). The Castellum share is listed on Nasdaq Stockholm Large Cap. For further information visit www.castellum.com. 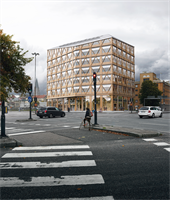