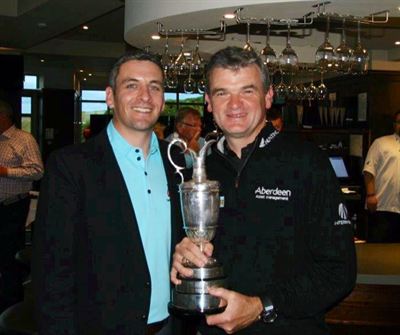 More than 40 players, representing 21 corporate affiliates of the club, took part in the event which included a nine-hole competition on the course where the last three Scottish Open competitions were held.

The individual winner was Graeme Eunson, from Tomatin Distillery, with Allan McGuire, from Hawco Group, runner-up. The Tomatin team, which comprised  Graeme, Stephen Bremner and Graeme Nicolson, will also have their name put on the cardholders’ Quaich.

Before teeing off, the golfers were treated to a 45-minute clinic where Paul Lawrie gave advice on playing a variety of shots, including driving, pitching and recovering from bunkers.

After dinner in the clubhouse, the Aberdeen-based player presented awards and then took part in an informal question and answer session where he gave a fascinating insight into his 1999 Open win, life on the European Tour and his two Ryder Cup appearances, including the famous Miracle at Medinah comeback victory in 2012.

Paul later posed for pictures with corporate guests and a replica of the claret jug which he was given after his famous win at Carnoustie.

Stuart McColm, general manager at Castle Stuart Golf Links, said: “The card holders’ day is our way of thanking our corporate affiliates for their support.

“The weather was very kind to us and the feedback from everyone was fantastic. And Paul being there to share some useful advice and memories of his outstanding career made it even more special.”

Organisation of the event was widely seen as a success for the club’s new management team of Stuart McColm, director of golf Jeremy Matte and marketing and administration manager Stefanie Whyte.

The trio have recently taken up new roles and responsibilities. As well as his general managers’ role, Stuart is now also responsible for developing tour operator trade which makes up about 25 per cent of the club’s business. Jeremy, who stepped up from the position of golf operations manager, is the main contact for corporate clients.

Stuart added: “Looking ahead, the future is very bright for Castle Stuart in this the Year of Homecoming and Ryder Cup year in Scotland. Having a new team with new roles allows us to review our strategies with fresh eyes and renewed energy.”

Castle Stuart Golf Links, which employs 20 full-time staff and 50 during the golf season, opened in 2009 and has since become internationally renowned among both amateur and professional players.

Building on its fast-track to stardom, the course is progressing a number of new developments, including the 55-bed Dormy House bespoke golf hotel and two, three and four-bedroom lodges to provide more on-site luxury accommodation.

Stuart added: “We already have a world class, Top 100 golf destination but the forthcoming Dormy House development will elevate that to a new level. That, and the knowledge, enthusiasm and passion of the team, which ensures golfers are looking after golfers, means we are in a great position in an increasingly competitive market.”

Stuart McColm started his career in greenkeeping at St Andrews and worked for many years in golf course construction. He subsequently spent eight years as contracts manager at Southern Golf in Germany before becoming course manager at the renowned Kingsbarns Golf Links. He joined Castle Stuart Golf Links as project manager in 2006 and later became general manager.

Jeremy Matte, originally from Hoosick Falls, New York, started out as a caddy and was later a caddy master at the Carnegie Abbey Club in Rhode Island. On moving to Scotland with his Scottish wife in 2008, he visited the then embryonic Castle Stuart project and applied for a job. He later became golf operations manager and now director of golf.

Stefanie Whyte was born in Germany and studied at the University of Erlangen, later becoming an English and Italian translator. After moving to Scotland she worked at The Nairn Golf Club before moving to Castle Stuart in 2009.

Scotland, the home of golf. History and diversity make Scottish golf courses famous throughout the world. As Turnberry is to Ayrshire and Gleneagles is to Perthshire, Castle Stuart has been conceived to be for the Highlands - a beacon reaching out to golfers throughout the world. The centrepiece for this Scottish destination golf resort is Castle Stuart Golf Links, a championship links course overlooking the Moray Firth and well-known landmarks that are synonymous with Inverness and the Black Isle. 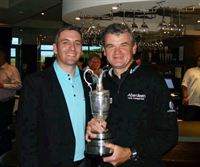