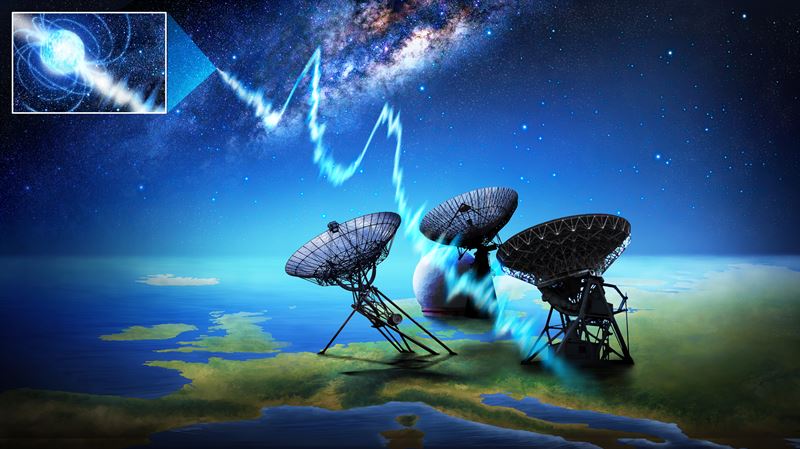 By studying the site of a spectacular stellar explosion seen in April 2020, a Chalmers-led team of scientists have used four European radio telescopes to confirm that astronomy’s most exciting puzzle is about to be solved. Fast radio bursts, unpredictable millisecond-long radio signals seen at huge distances across the universe, are generated by extreme stars called magnetars – and are astonishingly diverse in brightness.

For over a decade, the phenomenon known as fast radio bursts has excited and mystified astronomers. These extraordinarily bright but extremely brief flashes of radio waves – lasting only milliseconds – reach Earth from galaxies billions of light years away.

In April 2020, one of the bursts was for the first time detected from within our galaxy, the Milky Way, by radio telescopes CHIME and STARE2. The unexpected flare was traced to a previously-known source only 25 000 light years from Earth in the constellation of Vulpecula, the Fox, and scientists all over the world coordinated their efforts to follow up the discovery.

In May, a team of scientists led by Franz Kirsten, from Chalmers University of Technology, pointed four of Europe’s best radio telescopes towards the source, known as SGR 1935+2154. Their results are published today in a paper in the journal Nature Astronomy.

“We didn’t know what to expect. Our radio telescopes had only rarely been able to see fast radio bursts, and this source seemed to be doing something completely new. We were hoping to be surprised!”, said Mark Snelders, team member from the Anton Pannekoek Institute for Astronomy, University of Amsterdam.

The radio telescopes, one dish each in the Netherlands and Poland and two at Onsala Space Observatory in Sweden, monitored the source every night for more than four weeks after the discovery of the first flash, a total of 522 hours of observation.

On the evening of May 24, the team got the surprise they were looking for. At 23:19 local time, the Westerbork telescope in the Netherlands, the only one of the group on duty, caught a dramatic and unexpected signal: two short bursts, each one millisecond long but 1.4 seconds apart.

Kenzie Nimmo, astronomer at Anton Pannekoek Institute for Astronomy and ASTRON, is a member of the team.

“We clearly saw two bursts, extremely close in time. Like the flash seen from the same source on April 28, this looked just like the fast radio bursts we’d been seeing from the distant universe, only dimmer. The two bursts we detected on May 24 were even fainter than that”, she said.

This was new, strong evidence connecting fast radio bursts with magnetars, the scientists thought. Like more distant sources of fast radio bursts, SGR 1935+2154 seemed to be producing bursts at random intervals, and over a huge brightness range.

“The brightest flashes from this magnetar are at least ten million times as bright as the faintest ones. We asked ourselves, could that also be true for fast radio burst sources outside our galaxy? If so, then the universe’s magnetars are creating beams of radio waves that could be criss-crossing the cosmos all the time – and many of these could be within the reach of modest-sized telescopes like ours”, said team member Jason Hessels (Anton Pannekoek Institute for Astronomy and ASTRON, Netherlands).

Neutron stars are the tiny, extremely dense remnants left behind when a short-lived star of more than eight times the mass of the Sun explodes as a supernova. For 50 years, astronomers have studied pulsars, neutron stars which with clock-like regularity send out pulses of radio waves and other radiation. All pulsars are believed to have strong magnetic fields, but the magnetars are the strongest known magnets in the universe, each with a magnetic field hundreds of trillions of times stronger than the Sun’s.

In the future, the team aims to keep the radio telescopes monitoring SGR 1935+2154 and other nearby magnetars, in the hope of pinning down how these extreme stars actually make their brief blasts of radiation.

Scientists have presented many ideas for how fast radio bursts are generated. Franz Kirsten, astronomer at Onsala Space Observatory, Chalmers University of Technology, who led the project, expects the rapid pace in understanding the physics behind fast radio bursts to continue.

“The fireworks from this amazing, nearby magnetar have given us exciting clues about how fast radio bursts might be generated. The bursts we detected on May 24 could indicate a dramatic disturbance in the star’s magnetosphere, close to its surface. Other possible explanations, like shock waves further out from the magnetar, seem less likely, but I’d be delighted to be proved wrong. Whatever the answers, we can expect new measurements and new surprises in the months and years to come”, he said.

More about the research, the telescopes and Onsala Space Observatory

Onsala Space Observatory is Sweden's national facility for radio astronomy. The observatory provides researchers with equipment for the study of the earth and the rest of the universe. In Onsala, 45 km south of Gothenburg, it operates four radio telescopes and a station in the international telescope Lofar. It also participates in several international projects. The observatory is hosted by the Department of Space, Earth and Environment at Chalmers University of Technology, and is operated on behalf of the Swedish Research Council.