Engineering of a Swedish quantum computer set to start 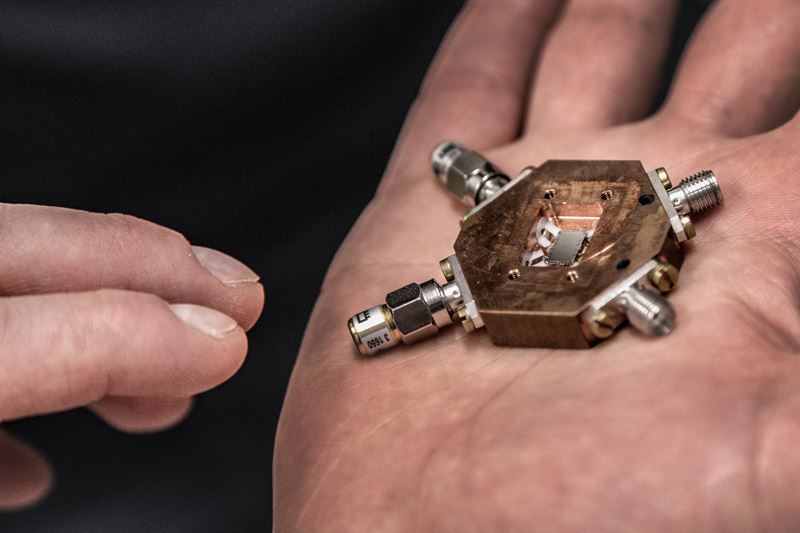 A SEK 1 billion research initiative is setting Sweden on course to a global top position in quantum technology. The focus is on developing a quantum computer with much greater computing power than the best supercomputers of today. The initiative, which is headed up by Professor Per Delsing at Chalmers University of Technology, has been made possible by an anniversary donation of SEK 600 million from the Knut and Alice Wallenberg Foundation.

The progress of research in quantum technology in recent years has brought the world to the brink of a new technology revolution – the second quantum revolution. Researchers have learnt to control individual quantum systems such as individual atoms, electrons and particles of light, which is opening the door to completely new possibilities. Extremely rapid computers, intercept-proof communications and hyper-sensitive measurement methods are in sight.

A major Swedish initiative – the Wallenberg Centre for Quantum Technology – is now being launched under the leadership of Chalmers University of Technology to contribute to, and implement the second quantum revolution. Some 50 researchers are to be recruited under the decade-long research programme which begins in January 2018. In addition to the donation from the Knut and Alice Wallenberg Foundation further funds are coming from industry, Chalmers University of Technology and other universities, resulting in a total budget of close to SEK 1 billion.

“Our goal is to have a functioning quantum computer with at least a hundred qubits. Such a computer has far greater computing power than the best supercomputers of today and can be used, for example, to solve optimisation problems, advanced machine learning, and heavy calculations of the properties of molecules,” says Per Delsing, Professor of Quantum Device Physics at Chalmers University of Technology and the initiative’s programme director.

See and hear the researchers tell their story in a video on Youtube: The Quantum Revolution

There is a great deal of interest in quantum technology throughout the world. Major investments are being made in the USA, Canada, Japan and China and the EU is launching a Quantum Technology Flagship in 2019. Companies such as Google and IBM are also investing in quantum computers and, like Chalmers, have chosen to base them on superconducting circuits. Policy-makers and business managers are starting to realise that quantum technology has the potential to change our society significantly, through improved artificial intelligence, secure encryption and more efficient design of medicines and materials.

“If Sweden is to continue to be a leading nation we need to be at the forefront in these fields. By focusing on the long-term expansion of expertise and by attracting the best young researchers we can put Sweden on the quantum technology map in the long term. There are no shortcuts. By investing in basic research we can ensure that the necessary infrastructure is in place so that over time other players and companies can take over and develop applications and new technologies,” says Peter Wallenberg Jr, chairman of the Knut and Alice Wallenberg Foundation.

In addition to the focus project the research programme includes a national excellence initiative with the aim of carrying out research and building up expertise in the four sub-areas of quantum technology: quantum computers, quantum simulators, quantum communication and quantum sensors. Chalmers University of Technology is coordinating the first two sub-areas. The expansion of expertise in quantum communication is headed up by Professor Gunnar Björk at KTH Royal Institute of Technology, and Professor Stefan Kröll at Lund University is coordinating the quantum sensor field.

Chalmers researchers have been working on superconducting qubits for almost 20 years and have made many contributions to enhance knowledge in the field, including publications in Nature and Science. They were among the first in the world to create a superconducting qubit, and have explored a completely new area of physics through wide-ranging experiments on individual qubits.

“I am pleased that our quantum physics researchers, along with colleagues in the rest of Sweden, will have this opportunity to focus on a specific and important goal in a way that all of Sweden can benefit from the knowledge acquired. I would also like to extend my warmest thanks to the Wallenberg Foundation for its deep commitment and long-term support,” says Stefan Bengtsson, President and CEO of Chalmers.

In parallel with this, the Knut and Alice Wallenberg Foundation is investing SEK 1 billion in artificial intelligence, channelled through the Wallenberg Autonomous Systems and Software Program (WASP), which was launched in 2015. Details of the investment can be found in a press release from Linköping University: Billion kronor programme for Swedish AI research

Read more about the link between the two anniversary donations in a press release from the Knut and Alice Wallenberg Foundation: SEK 1.6 billion for artificial intelligence and quantum technology

After many years of basic research on strange quantum phenomena such as superposition, entanglement and squeezed states, scientists have learned to control individual quantum systems as individual atoms, electrons and photons. The world record currently stands at 20 qubits, but rapid progress is being made each month. Applications such as extremely fast quantum devices, intercept-proof communications and hyper-sensitive measuring methods are in sight.

Therefore, heavy investments in quantum technology are being made throughout the world. The EU launches a ten-year venture of one billion euros in 2019. Even larger programmes exist in North America, Asia and Australia. IT companies like Google, IBM, Intel and Microsoft are also making significant investments. Safe and fast communication is a strong driving force for quantum technology. Already today there are commercial systems that can transmit quantum encryption keys through an unbroken optical fibre over 100 kilometres, although at a relatively low speed.

An imminent milestone that scientists are struggling to achieve is to demonstrate quantum supremacy, which means solving a problem beyond reach even for the most powerful future classic computer. This requires at least 50 qubits. This will be done by means of a quantum simulator, a simpler form of quantum computer. Useful applications of quantum simulation are expected within five years. Realizing a functioning programmable quantum computer will take significantly longer.

Mankind’s knowledge about the world and our technical advances are limited by what we can measure, and how accurately. Researchers are also learning to use individual particles, such as photons and electrons, as sensors in measurements of force, gravity, electrical fields, etc. With quantum technology, the measuring power is pushed far beyond what was previously possible.