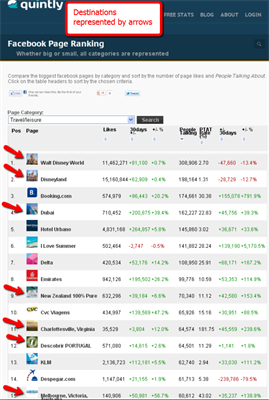 “Charlottesville, Virginia” Facebook page the most talked about
travel / leisure City page in the world

Charlottesville, November 2, 2012 – The Charlottesville Albemarle Convention and Visitors Bureau (CACVB) excitedly reports that its “Charlottesville, Virginia” Facebook page (www.facebook.com/charlottesvillevirginia) is the world’s #1 most talked about City Travel and Leisure page in the world this week, as rated by both Quintly.com and PageData.com.

Facebook measures fan engagement with a statistic called “talking about this”, which is the sum of comments, shares, and likes of a page’s content during a one week span. This week, with over 64,000 people “talking about this”, the Charlottesville Facebook page is ranked in the top 1500 most engaged pages in the world, regardless of size or category. Facebook reported in April to have over 42 million pages.

“These statistics confirm that Charlottesville’s notoriety is growing fast”, says John Freeman, eMarketing Specialist for the CACVB. “Our strategy is simple. Post pictures of our fall scenery, historic sites, downtown, and pastoral beauty. In return we’ve acquired more likes, comments and shares than any city travel page in the world. We’re outshining bureau-run Facebook pages across the globe that have millions of fans and have had millions of dollars pumped into them.”

Kurt Burkhart, CACVB Executive Director, reflecting on the bureau’s demonstrated successes in the effective use of social media says that he “is floored by today’s Facebook statistics. To compete and win on a world-wide scale is proof that the Charlottesville region is indeed a world class destination.” While return on investment in social media is difficult to pinpoint, Burkhart believes the success of the page increases tourism business in the City and County. “Based on studies of other destinations on social media, coupled with our extraordinary success, we are confident that the Charlottesville Facebook page is responsible for millions of dollars in increased visitor spending in our area.”

Today, Charlottesville, Virginia’s Facebook page counts over 35,800 very engaged fans. Always on the lookout for the next trend in social media, the CACVB also engages fans via Pinterest and has a strong presence on Twitter. The CACVB stepped into the realm of social media marketing in February, 2011.

About the CACVB
In addition to providing a wealth of information on the area to individual visitors, the CACVB assists tour operators, meeting planners, reunions and other groups to find attractions, restaurants, hotels, and other visitor related businesses. Its mission is “to enhance the economic prosperity of City and County by promoting, selling and marketing the City of Charlottesville and County of Albemarle, as a destination, in pursuit of the meetings and tourism markets.”