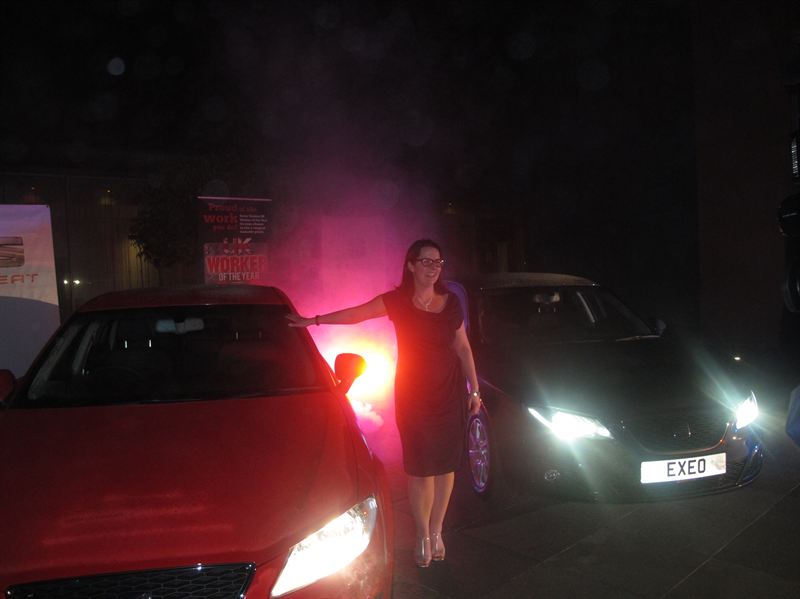 Di Mayze an entrepreneur from Nottingham has been crowned UK Worker of the Year for 2012, in the Dickies competition sponsored by SEAT to recognise and reward excellence in the British workforce.

In the gala awards finale, at Marlow’s Crowne Plaza hotel, Di picked up the keys to a superb SEAT Exeo S Ecomotive 2.0, worth more than £20,000.

Di’s company called Ippee Design Ltd was launched in January last year when Di was on maternity leave. A year on and the popular product BuggyTug is sold by some of the leading retailers. She has since launched a new product TugTrio that is a pack of three buggy straps.

A delighted Di, said: “I am so surprised, I am just trying to take it all in. I love what I do and my products have the potential to save lives - accidents involving a buggy rolling away are so common in some countries that it is illegal not to have one.”

Somerset Pest Controller Tom Edwards who took joint second place commented: “The whole thing is absolutely unbelievable. Every single one of the other people who have made it into the final is fantastic. I didn’t even think I would make it into the last six, so to actually receive the Runner Up award is so unexpected, I can’t explain how great it feels.”

Suffolk Painter & Decorator, Anna Bettis, joint runner up said: “I am amazed I got to the final six, this is an experience, I will never forget.”

Both were presented with £1,500 each worth of holiday vouchers from Thomas Cook.

UK Worker of the Year is now in its third year of seeking out, rewarding and promoting excellence in the British workforce.

SEAT Fleet & Business Sales Marketing Manager and WOTY judge Peter Brooking added: “I am so pleased to be involved with UKWOTY and it was tough decision to seek out the winner as all finalist displayed qualities worthy of first place.”

“Dickies has come up with a fantastic initiative in these hard times – just the sort of positive thrust we need to help get us out of an economic recession,” comments Chairman of Judges, TV Presenter and Consumer Motoring Champion, Quentin Willson. “The competition this year was even more intense than last year, which reflects the fact that word about UK Worker of the Year continues to spread wider.”

Look out for news about UK Worker of the Year 2013!

Info for the photo captions: