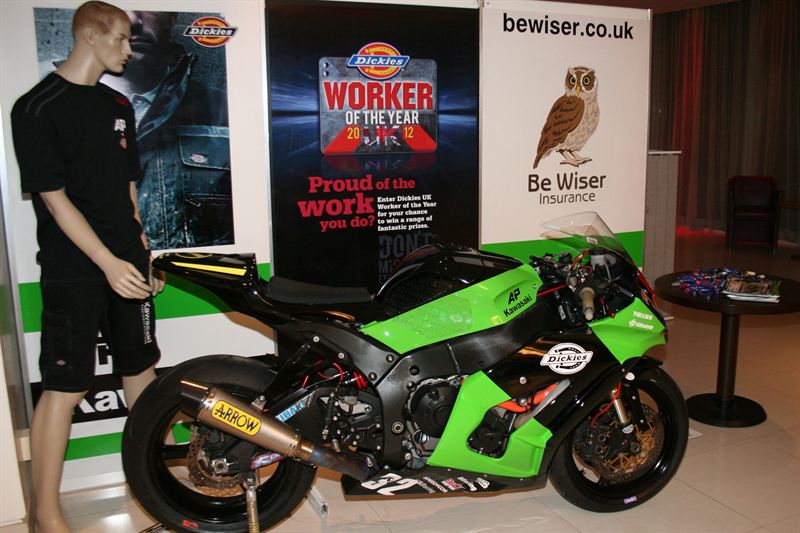 The inaugural Dickies Racesafe Marshal of the Year Award was presented to Bryan Webb at the gala finale of the 2012 UK Worker of the Year Competition last weekend.

Bryan was presented the Award by Chris Walker and Maurice Morton, Marketing Director of Williamson-Dickie Europe, following a vote by his Racesafe colleagues from a shortlist of six nominations.

Bryan, along with his family, have a long association with British motorcycle racing which extends back to the 1970s where he was part his father-in-law Harold Coppock's team as a mechanic, working with many top riders including Steve Parrish and the late Steve Henshaw. In the 1990s he exchanged spanners for flags, becoming a marshal and official at Club, National and International events. He proudly holds the great achievement of officiating at each and every BSB event since its re-launch in 1996.

MCE Insurance British Superbike Championship Series Director Stuart Higgs commented: "Bryan is an outstanding member of the marshal community. He thoroughly deserved to win the inaugural Award for his commitment, dedication and experience that he has shown not only during the season but also in the past."

Bryan Webb said: "It was an honour for me to receive this Award and it really means a lot to me, especially as it was voted for by my fellow marshals and riders. It really is an amazing feeling to have been given this recognition and I am proud to be part of the Racesafe community and the Championship."

Dickies joined the MCE BSB Championship in 2012, becoming the Official Supplier of work wear to all of the Racesafe Marshals who volunteer trackside each weekend.