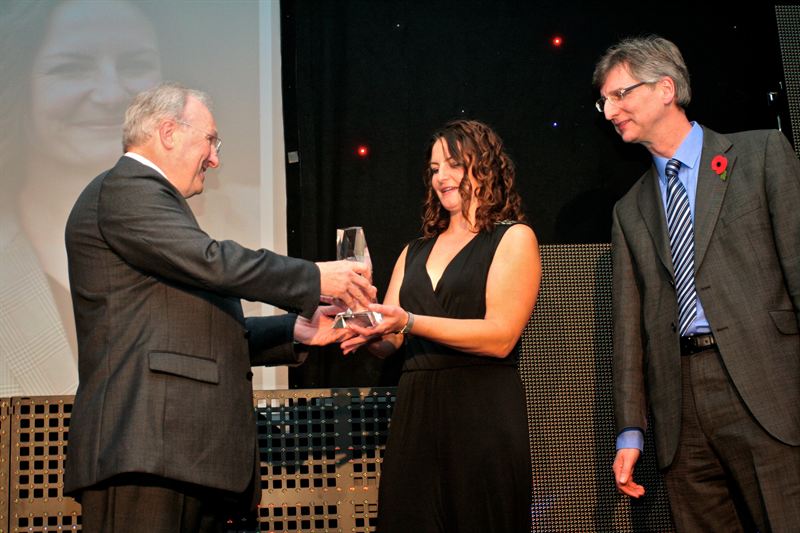 Anna Bettis has been named as 2012 joint UK Worker of the Year Runner Up in the nationwide competition organised by leading workwear manufacturer, Dickies to recognise and reward excellence in the British workforce.

In a gala awards finale, at Marlow’s Crowne Plaza hotel, Anna was given the award and a prize package that includes the choice of holiday up to the value of £1,500.

Anna and her husband Carl own their own painting & decorating company Onevine and it was Carl that nominated Anna. Anna believes that having great customer relations is vital to ensure that their clients are confident and trust the couple working in their home.

“The whole thing is absolutely unbelievable,” commented Anna. “Every single one of the other people who has made it into the final is fantastic. I didn’t even think I would make it into the last six, so to actually receive the Joint Runner Up award is so unexpected, I can’t explain how great it feels. It has been a privilege to be part of the competition.”

UK Worker of the Year is now in its third year of looking to recognise, reward and promote excellence in the British workforce and the word has spread wider than ever before about both the competition.

“Dickies has come up with a fantastic initiative in these hard times – just the sort of positive thrust we need to help get us out of an economic recession,” comments Chairman of Judges, TV Presenter and Consumer Motoring Champion, Quentin Willson. “The competition this year was even more intense than in 2011, which reflects the fact that word about UK Worker of the Year continues to spread wider.”

UK’s 2011 Worker of the Year, Anna Simpson comments: comments: “Anna really made a big impression on us all because of her attitude. She came incredibly close to winning it.”

Dickies is proud to announce that it will again be organising UK Worker of the Year for 2013 as part of its commitment to the British market and the workers for whom the company provides quality, cost effective workwear.

The 2012 UK Worker of the Year won a SEAT Exeo S Ecomotive as part of their prize for winning the title and there were holidays for the runners up, as well as various products from the Dickies range of high quality workwear and from Makita Tools.