They are the winners of the Children’s Climate Prize 2019 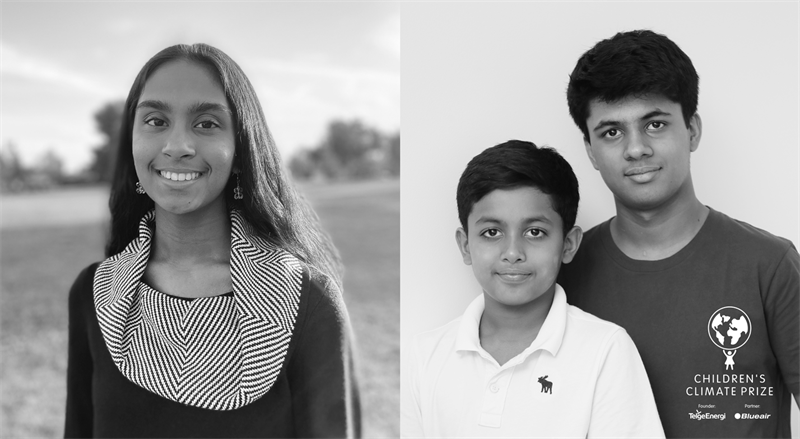 - projects from the US and India awarded Swedish climate prize

The winners of the Children’s Climate Prize 2019 are 16-year-old Shreya Ramachandran from Fremont, USA, and the two brothers Nav and Vihaan Agarwal, 12 and 15 years old, from New Delhi, India. Shreya is the winner in the category Children’s Climate Prize for her water conservation project The Grey Water Project. Nav and Vihaan are the winners in the new category Clean Air for their project One Step Greener aimed at fighting air pollution. The winners receive 100 000 SEK each handed out an awards ceremony at Stockholm City Hall on 13 November.

The Children’s Climate Prize, one of the world’s largest climate awards for young people aged 12 to 17, celebrates its fourth edition in 2019. Many nominations were received from young innovators and activists around the world who have done something extraordinary for the environment.  Out of five finalists presented earlier this month, an independent jury of climate experts selected Shreya Ramachandran, 16 years old from Fremont, US, and Nav and Vihaan Agarwal, 12 and 15 years old from New Delhi, India.

“It’s incredibly inspiring to see the large number of climate-committed young people, from all over the world, come up with solutions and inspire through their ability to move from idea to action. Shreya, Nav and Vihaan are great sources of inspiration for all of us, and we look forward to seeing their projects grow”, says Johan Kuylenstierna, Chairman of the jury, adding “It was difficult to select the winners from the many qualified entries this year”.

Water covers 70% of our planet. It’s the source for life as we know it. And it’s easy to think that it will always be there. But the fact is, only 3% of the water on earth is fresh water and many parts of the world still lack access to it. So why do we waste it? That was the problem Shreya Ramachandran set out to solve. Today, after years of hard work, she has come up with a ground-breaking technique to save grey water that comes from households to be reused for irrigation. At the same time her non-profit organization The Grey Water Project has taken on the tremendously important task to introduce kids in schools to the concept of water conservation. They do so with the purpose to make it as natural as reusing paper or plastic in our everyday lives. Basically, Shreya is working to save the source of life. What more can we ask from a young talented entrepreneur. Her work is of great significance today but will be even more important tomorrow as water scarcity continues to be one of the world’s most important issues to tackle. Therefore, we are proud to present Shreya Ramachandran as the winner of the Children’s Climate Prize 2019.

Air pollution is today the single biggest environmental threat to human health according to the WHO with 9 out of 10 people breathing toxic air. New Delhi in India is the capital with the world’s dirtiest air. Here, as in many other cities, air pollution can be derived from a diverse range of sources, but a major one is trash burning. In Indian cities, 50% to 90% of trash collected ends up in landfills. Burning is typically the only removal method available today, filling the air with toxic gases and harmful particles. Nav and Vihaan Agarwal, two brothers of 12 and 15 years old, created the organization One Step Greener, which strives for a zero-waste future, aiming to reduce air pollution and improve health and wellbeing of people in New Delhi.

They are facing a giant problem where they have created a system to counteract the garbage that is burned on large dumps, by educating people about the importance of recycling waste at source and offering door-to-door dry waste pick-ups. Since materials are recycled, they attack the problem from two different directions: first one being that materials are not burnt, and air pollution is not released into the air. The second is that recycling is so much better from an energy standpoint and it is even more important in countries where the energy comes from fossil fuels. In India, 75% of electricity comes from coal-fired power plants, which also emit huge amounts of air pollution.

We are proud to congratulate Nav and Vihaan Agarwal as the first winners of the Clean Air Prize.

The Children’s Climate Prize award ceremony will take place at a gala evening in Stockholm City Hall on 13 November. Stockholm City Hall has, in collaboration with Agnes Fredriksson – Sweden’s youngest Master Chef 2019 – created a special plant-based menu for the event. In addition to the customized menu, speeches from the winners and awards, the evening will also feature performances by Swedish artists Mariette and Felix Sandman.

The day before, the two winners will visit Södertälje City Hall to participate in the Children’s Climate Talks. The event is a platform where the winners get a chance to present their project in more detail for all visitors. The other finalists will also participate in the discussions via link.

The Children’s Climate Prize has grown since it first started in 2016. In 2019 a new category, “Clean Air”, in recognition of air pollution being the single biggest threat to human health has been added. The winners in both categories are determined by an independent jury including academics and climate activists such as WWF and are awarded 100 000 SEK to develop their projects. The new Clean Air Prize has been initiated by Blueair, a world leader in air purification solutions.

The Grey Water Project and its founder, Shreya Ramachandran, is working to raise awareness about the benefits of grey water reuse and water conservation. The idea was born during a trip to California at the peak of the state’s water drought, when 16-year-old Shreya saw firsthand the crippling effects of the drought. She quickly realized that water scarcity is a big and global issue and came up with a way to help conserve water – by using the water we already have in our homes. Shreya and the Grey Water Project has educated tens of thousands of people about the benefits of water reuse. The organization is accredited to the United Nations Environment Program and it is also a member of the Global Wastewater Initiative (GW2I).

Vihaan and his younger brother Nav created the organization One Step Greener (OST) which strives for a zero-waste future, aiming to reduce air pollution and improve health and wellbeing of people in New Delhi. The idea came to life when the brothers realized that 30 percent of the waste sent to landfills could have been recycled, and 50 percent could have been composted. They have created a system to counteract the garbage that is burned on landfills, by educating people about the importance of recycling waste at source and offering door-to-door dry waste pick-ups. So far, One Step Greener has recycled over 65 tons of waste, preventing about three tons of carbon dioxide from being released into the atmosphere.