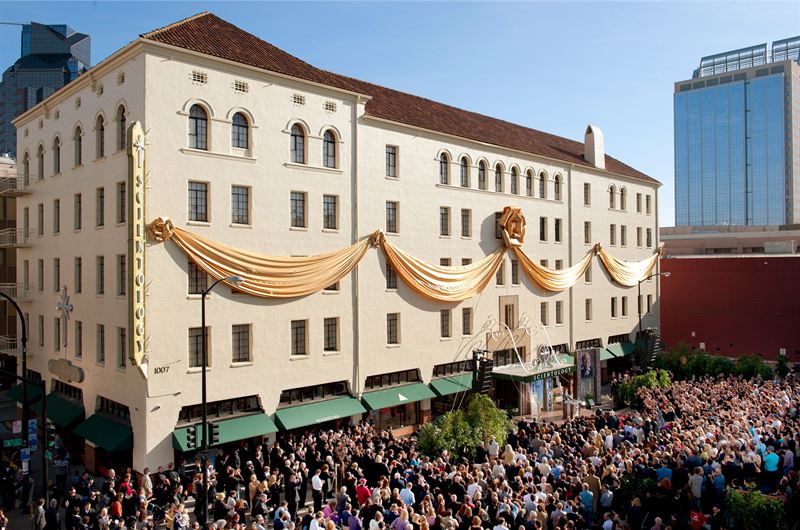 The Church’s new home, located just blocks from the State Capitol, is one of the city’s most prominent architectural landmarks. Originally opened in 1930 as the Ramona Hotel and designed by California’s first state architect, the building is Sacramento’s finest surviving example of the Spanish Colonial Revival style. The Church meticulously preserved the building’s structure and restored its features to their original glory, including the characteristic stucco, ornamental glazed brick and terra cotta tiles, decorative iron accents and the original blade sign. All restoration was planned and executed for minimal environmental impact and maximum sustainability, meeting the U.S. Green Building Council’s Leadership in Energy and Environmental Design (LEED) gold certification standards.

The grand opening of the new Church was distinguished by the presence of Mr. David Miscavige, Chairman of the Board Religious Technology Center and ecclesiastical leader of the Scientology religion, who officiated at the ceremony.

In signifying the importance of this new Church, Mr. Miscavige said: “The dedication of this new Church signifies a solemn pledge. It’s a pledge to employ the full measure of what lies within those walls on behalf of this City. It’s a pledge to make a world of which we can be proud. A world without insanity, criminality, illiteracy and immorality; a world where the able can prosper, where honest beings have rights and where all are free to rise to greater heights. That’s our responsibility as Scientologists. And, yes, a responsibility we willingly embrace.”

In his salutatory address, Mayor Kevin Johnson welcomed and acknowledged the Church for demonstrating its commitment to the city: “Sacramento is the most diverse city in the country, and your church and what you guys are doing is diverse. This building here is not just a building for you—it’s a building for the community.  It’s a building that will help us revitalize this downtown area. The Church of Scientology came to us and said, ‘Look, we want to help. We want to take a historic building and preserve it and renovate it and make it a masterpiece for the downtown area showcase.’ We really wanted to transform Sacramento into the greenest region in the country and a hub for clean technology and you folks are helping to make that a reality. You have done your part.”

California State Assembly Member Mike Gatto commended the work of the Sacramento Church of Scientology and its Citizens Commission on Human Rights to protect children from psychotropic drugging: “These kids may never have the chance to find themselves before being prescribed a drug.  They may never know what it means to feel their own pure emotion in their hearts and their own thoughts in their minds. You can rest assured I will continue to do everything in my power to see that every legislator and parent hears your voice, and thereby gains their own power to act for the sake of all children in California.”

Interfaith Council of Greater Sacramento President Jon Fish recognized the Church’s effective contribution to the community, including its humanitarian program utilizing L. Ron Hubbard’s book, The Way to Happiness: “I can’t tell you how uplifting it is to know there are people out there every day—the Scientologists—addressing moral virtues in society, and who really know what they’re doing. For those reasons and so many more, we welcome members of the Church of Scientology. We know this will always be a home of friendship toward us and others. There shall always be an open invitation and an outstretched hand.”

Highlighting the Church’s work in human rights education, Greater Sacramento Urban League president David DeLuz said: “You are educating people on their rights and thereby building up the coming generation who we’ll rely on to protect those rights for everyone, no matter their race, color, creed or religion. Here in California’s capital, we come from everywhere… We need to nurture that, which is exactly what you’re doing. Because this is a Church, not just open to everyone but you freely give to anyone the many tools you have. That’s why this Church is as much a gift to Sacramento as to your parishioners.”

Citing the Church’s worldwide Truth About Drugs education program, International Faith-Based Coalition founder and president Bishop Ron Allen said: “I’ve always said ‘so goes California, so goes the nation.’ Cleaning up the capital and blanketing it with Truth About Drugs materials will cause an effect so great it will ripple out across America. This program is the answer to the global epidemic.  I want it mandatory for school children across America to go through the Truth About Drugs curriculum.”

The new Ideal Church of Scientology of Sacramento rises seven stories and measures 57,000 square feet. In addition to its central Chapel for all congregational gatherings, Sunday Services and religious ceremonies, the Church further includes multiple seminar rooms and classrooms, in addition to dozens of rooms for Scientology auditing (spiritual counseling).

The entirety of the ground floor has been reserved for Introductory Services, welcoming visitors and those wanting to find out about Scientology for themselves. It further includes an expansive Public Information Center, providing a complete introduction to the beliefs and practices of the Scientology religion, as well as the life and legacy of Scientology Founder L. Ron Hubbard. The Information Center additionally presents a detailed overview of Church-sponsored humanitarian programs, including a worldwide human rights initiative; an equally far-ranging drug education, prevention and rehabilitation campaign; a global network of literacy and learning centers; and the Scientology Volunteer Minister program now comprising the largest independent relief force on Earth. In full, the Information Center’s multimedia displays offer some 500 informational and documentary films at the touch of a button. The Center is open morning to night and visitors are invited to tour at their leisure and return as often as they wish.

Ideal Orgs realize the fulfillment of Founder L. Ron Hubbard’s vision for the religion.  They not only provide the ideal facilities to service Scientologists on their ascent to greater states of spiritual awareness and freedom, but they are also designed to serve as a home for the entire community and a meeting ground of cooperative effort to uplift citizens of all denominations.

More than 15 new Ideal Orgs are scheduled for grand opening in 2012.

For a complete list of new Churches of Scientology, visit Scientology.org.

The Scientology religion was founded by author and philosopher L. Ron Hubbard. The first Church of Scientology was formed in Los Angeles in 1954 and the religion has expanded to more than 10,000 Churches, Missions and affiliated groups, with millions of members in 167 countries.