Scientologist Kaye Champagne, a driving force in the Scientology community 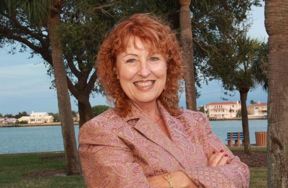 Known for her guts, her compassion and her ability to inspire others, Kaye Champagne is a driving force in the Scientology community, a key player in opening dozens of Ideal Scientology Churches in the past several years.  She is also happily married, a proud mother, and a successful businesswoman who travels the world doing exactly what she loves to do.

“I wake up every morning with a smile on my face,” she says. “When I get in my car, I’m usually singing.  I travel the world delivering seminars.  I’m helping people and seeing them change because of what I do.  I also run two businesses, I’m constantly busy, yet I have all the time I want for myself.  I’m doing everything and more than I ever envisioned when I was growing up.”

It was nearly 40 years ago that Champagne first encountered Scientology.

“I was always looking for answers and driving my priests and ministers crazy with my questions like ‘Why are we here?’  ‘What are we doing?’ ‘What happens after we die?’” she says.

In 1972, someone she met through her work directed her to the local Scientology Church for a copy of Dianetics: the Modern Science of Mental Health.

“It was a Sunday and I read the entire book that day.  I went back the next day and said, ‘What do I do now?’” she says, “and I have never stopped since.”

And with that, Champagne changed the course of her life.

“I was heading in the wrong direction,” she says, “heading for a life of pain, emotional ups and downs and failures.  I had very low self-esteem.  Scientology put me on the right road—a road that led to happiness.”

Chairman of a group that coordinates Scientology volunteer activities for the entire Clearwater/Tampa Bay region, Champagne and her team set the standard for the rest of the Scientology world.  Entrusted with the project of opening the first Ideal Scientology Org (Organization) in 2003, the Church of Scientology of Tampa, they succeeded.  The Tampa Church expanded so rapidly, eight years later they had to move again, this time to an 88,000-square-foot historic landmark, Ybor Square.  Champagne and her group also took care of hundreds of details that made the move possible.

Champagne’s touch is visible in dozens of new Ideal Scientology Orgs opened in cities over the past several years.  She travels to cities around the world to deliver seminars, hold rallies and help with fundraising events, inspiring local congregations to overcome all obstacles to creating their new church.

Whatever the future holds for Champagne, it is bound to include Scientology.

“I am living my dream,” she says. “Scientology has made that possible.  But everyone can live whatever dream they want to lead.  That’s what Scientology is all about.”

To meet more than 200 Scientologists, visit the Scientology website at www.Scientology.org.

A digital pioneer and leader in the online religious community, in April 2008 the Church of Scientology became the first major religion to launch its own official YouTube Video Channel, with videos now viewed more than 7 million times.