For Mei-Hui Huang of Ji’an Township, Taiwan, Dianetics and Scientology opened new vistas and improved the quality of her life. Her video is one of more than 200 “Meet a Scientologist” videos available on the Scientology website at www.Scientology.org.

Before Scientology, Mei-Hui Huang had a solution for difficulties and stress. Unfortunately, it didn’t work.

“I used to escape from my problems in life. And if I couldn’t completely avoid them, I’d put them off,” she says.

Although she felt this was the only way she could get by, years of neglecting troublesome situations resulted in a disappointing marriage, an unsatisfying career and general frustration.

A friend suggested she watch the Dianetics DVD.

“The DVD helped me realize I had to start confronting my problems and that then I could learn the skills to resolve them,” she says.

She enrolled on courses at a Church of Scientology Mission in Taiwan and immediately put to use what she learned.

With her marriage, using newly acquired communication skills, she discovered it was easy to discuss things that were bothering her and gain her husband’s agreement to change them.

Next came her job. Huang had held a clerical position in the government agriculture association for many years when she was offered a job as an instructor, teaching childcare, sewing, baking, cooking and home management. Earlier, she would have steered clear of such a position, but now she felt confident enough to accept it.

“My job is full of challenges, especially compared with what I used to do. Before I only had to interact with a few co-workers. Now I work with hundreds of mothers, helping them care for their families,” she says.

“I think the most important thing in life is wis­dom. With wisdom you can help your family, friends and others,” says Huang. “And I love to help.”

A digital pioneer and leader in the online religious community, in April 2008 the Church of Scientology became the first major religion to launch its own official YouTube Video Channel, with videos now viewed more than 6 million times. 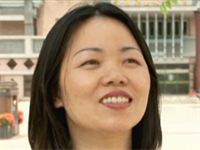