Volunteers from the Church of Scientology of Amsterdam bring The Way to Happiness to the people of their city. 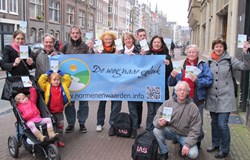 Nearly every weekend for the past 12 months, volunteers from the Church of Scientology of Amsterdam have been out in the streets, distributing copies of The Way to Happiness. Their plan: to deliver a copy of the booklet to every household in Amsterdam. As of December 2013 they have handed out 35,000 booklets—a copy to every home in two of the seven districts into which the city is divided, Amsterdam Center and Amsterdam East.

Long known as one of the most tolerant nations on Earth, the Netherlands nonetheless has moral and ethical issues that impact the quality of life.

“The decline of moral values in our society can be seen everywhere,” says Dutch businessman Joop Remmerswaal, who runs the Amsterdam project and organizes the weekly The Way to Happiness activities. “We are sending out a positive message that people should treat one another with respect.”

The Way to Happiness is a nonreligious moral code written by author, humanitarian and Scientology Founder L. Ron Hubbard. It is based entirely on common sense. Immensely popular since its first publication, more than 109 million copies have been distributed in 111 languages in 209 countries, territories and dependencies.

The Church of Scientology and its members are proud to share the tools for happier living contained in The Way to Happiness with all who also have the goal of a better world. For more information, visithttp://www.Scientology.org/thewaytohappiness.

Scientology: How We Help—The Way to Happiness, Creating a World of Honesty, Trust & Self-Respect is one of a series of brochures published by the Church of Scientology International to meet requests for more information about the Scientology religion and its support of global humanitarian initiatives and social betterment programs.