Organized by the Association for Human Rights and Tolerance, the Human Rights Department of the Church of Scientology of Milan and Youth for Human Rights, the annual United for Africa concert forwards the right to education in Africa. 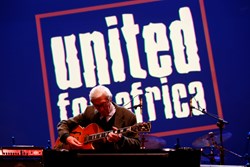 A star-studded ensemble led by jazz legend Franco Cerri performed December 19 at the annual “United for Africa” benefit concert at Teatro Carcano. Organized to further the right to education in Africa, proceeds will help build schools in Ghana for children who would otherwise be denied the right to education.

The concert was held in celebration of the 65th anniversary of the Universal Declaration of Human Rights, forwarding the message of a civilization based on respect for every individual regardless of race, creed or ethnicity. It was organized by the Association of Human Rights and Tolerance, the Human Rights Department of the Church of Scientology of Milan andYouth for Human Rights.

Education in Africa is an issue of urgent concern. According to the UNESCO Institute for Statistics—Adult and Youth Literacy: Global Trends in Gender Parity report of 2010, some 776 million adults in the world, most of them women, are unable to read and write; 75 million children have never gone to school. The Indexmundi list of comparative literacy shows many African countries face serious challenges on this issue.

The United for Africa benefit concert was sponsored by the region of Lombardy, the City of Milan, the National Association of Italian Municipalities (ANCI), the M.U.N.I. nonprofit organization, and the Ghana and the Democratic Republic of the Congo embassies and the Church of Scientology of Milan. The concert motto, from the writings of author, humanitarian andScientology Founder L. Ron Hubbard, was “Human rights must be made a fact, not an idealistic dream.”