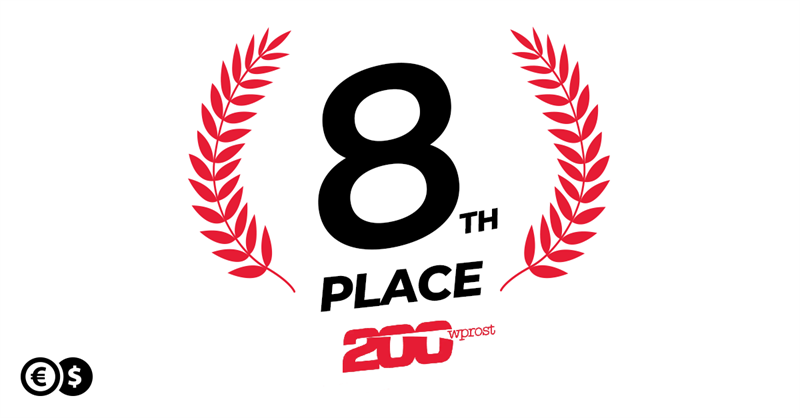 Once again Cinkciarz.pl, a part of Conotoxia Holding, was ranked at the top of the list of the largest Polish companies according to the Wprost weekly magazine. It was placed eighth in the latest “List 200”.

As in the previous year, Cinkciarz.pl took a high position in the ranking of the largest Polish companies. It overtook, among others, banks, energy organisations and media firms. At the same time, it became the highest ranked financial company.

“We are proud to have achieved this result. Eighth place in the ranking is an excellent outcome. We obtained it by making many new features and services available to the portal’s clients. These include international money transfers via mobile app and online payments. We have signed the next sponsorship agreements and have also appeared on cinema screens. Fans of action films had the opportunity to see our logos in the film “Creed II”. I assure you we will also positively surprise our users this year,” comments Piotr Kicinski, Vice-President of the Management Board, Cinkciarz.pl.

The financial portal found at Cinkciarz.pl and Conotoxia.com provides popular financial services in 26 currencies. At the same time, it offers many convenient payment transaction methods. Conotoxia.com is a sponsor of Chicago Bulls, National Football Team of Wales and Czech National Football Team. The portal has also become the first Official National Supporter for FIFA U-20 World Cup Poland 2019.

Cinkciarz.pl is the Polish brand from the Conotoxia Holding. The Group’s specialised companies provide competitive, transparent and innovative online financial services. These include money transfers, multi-currency cards, payments, online currency exchange and access to Forex trading. You can find these solutions and more (for example, multi-currency lending service) at Conotoxia.com, the international brand from the Group.The brands sponsor popular sports teams such as the Chicago Bulls and the National football team of Wales.