Cinkciarz.pl the best in the world according to Bloomberg's ranking 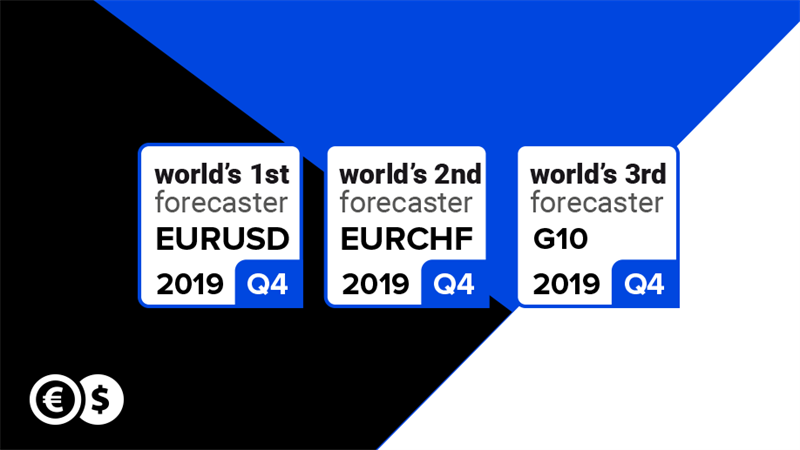 For the second time in a row Cinkciarz.pl, a company belonging to Conotoxia Holding, wins Bloomberg's prestigious ranking. Fintech's analysts were the most accurate in forecasting the EUR/USD exchange rate in Q4 2019, beating the world's most powerful financial institutions.

Cinkciarz.pl defended the gold medal in Bloomberg's world-famous competition. Previously, in Q3 2019, the Company also triumphed in the EUR/USD category.

"Athletes say that it is much harder to defend the championship than to win it. Considering how turbulent the market was last year, the satisfaction from winning on the most important currency pair over the global financial leaders is even greater. Unexpected turns in trade negotiations between the U.S. and China, economic stagnation in the eurozone, and Brexit made it challenging to anticipate currency movements, " says Piotr Kicinski, Vice-President of Cinkciarz.pl.

Repeatedly on the podium

Fintech's analysts also successfully forecast exchange rate of G10 currencies, i.e., a group of 10 globally traded currencies, as well as 13 major world currency pairs. In both Cinkciarz.pl was ranked third, advancing from the fifth and fourth positions respectively in the previous quarter.

"Most of the world's largest economies are facing economic slowdown and subdued inflation. There is also a matter of negative interest rates. Fiscal policy, recovery in industry, and placing inflation on a growth path are the main challenges for developed economies," points out Kicinski.

Six further achievements complete the medal classification. Bloomberg awarded Cinkciarz.pl with second place for euro/Swiss franc, US dollar/Hungarian forint, and US dollar/Turkish lira forecasts. Moreover, the Company was ranked third in euro/Russian ruble, US dollar/Czech crown, and US dollar/Chilean peso.

What can we expect in the coming months?

"The first phase of the U.S. — China agreement and Brexit scheduled for the end of January reduce uncertainty in the market, although those events do not eliminate it. Further events such as presidential elections in the United States, the second phase of the trade negotiations with China, and the conclusion of a new UK — EU trade agreement may continue to generate concerns. Therefore, the second part of the year will most likely be challenging for emerging countries' currencies, but it may have a happy ending," summarizes Piotr Kicinski.

Cinkciarz.pl is the Polish brand from the Conotoxia Holding. The Group’s specialised companies provide competitive, transparent and innovative online financial services. These include money transfers, payments, online currency exchange and access to Forex trading. You can find these solutions and more at Conotoxia.com, the international brand from the Group.The brands sponsor popular sports teams such as National football team of Wales and Czech Republic national football team.