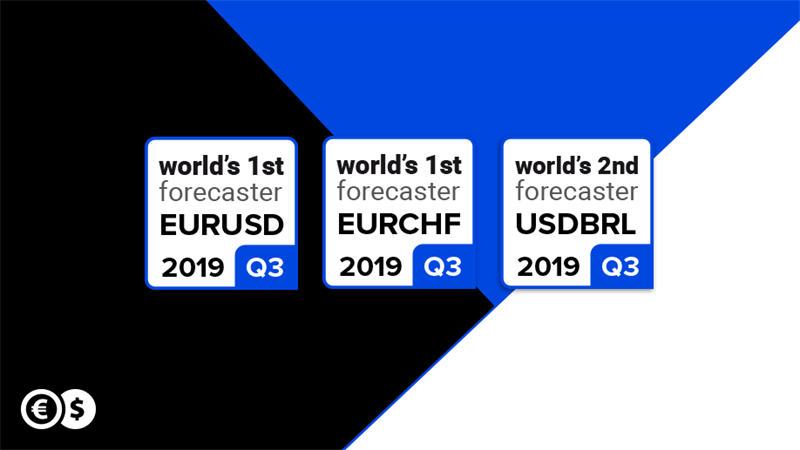 Cinkciarz.pl, one of the companies from Conotoxia Holding group, won the global classification of EUR/USD forecasters run by Bloomberg. Apart from winning on the main currency pair, the portal was rated first in key regional rankings and two currency pairs with the Polish zloty.

Every quarter, strategists and analysts of the leading financial institutions compete in the global ranking of the currency world's prominent business and financial news team, Bloomberg.

In the third quarter of 2019, the Cinkciarz.pl team was named the world's best forecaster for EUR/USD, the most important currency pair. "We are extremely proud of our forecasts' victory. It is worth noting that in this noble ranking, our advantage over global financial institutions was huge, and the score we received for our estimates — very high," says Piotr Kicinski, Vice-President of Cinkciarz.pl, part of Conotoxia Holding.

Apart from the key currency pair, Cinkciarz.pl also ranked the top currency forecaster for other currencies, e.g., euro to Swiss franc, as well as in Bloomberg's key regional rankings for EMEA (Europe, Middle East, and Africa) and Latin America currencies.

Cinkciarz.pl also turned out to be the undisputed leader in forecasting Central European currencies. The portal took a leading position for US dollar/Czech koruna, US dollar/Hungarian forint, US dollar/Polish zloty, US dollar/Romanian leu, euro/Polish zloty, and euro/Czech koruna. "The fact that we earned a gold medal on so many currencies from Central Europe is particularly worth emphasizing, as many of our portal's users are from this region," added Kicinski.

When building the ranking, Bloomberg takes into account the forecasts from the past four quarters, with the estimations from a year ago having the highest impact on the final result. Analysts from Cinkciarz.pl quickly identified the global conditions that have favoured the dollar over the past quarters. They concluded that almost any development in the global economy would support the American currency, as they described in the article "The dollar always wins?" published in the Polish financial newspaper "Parkiet" over a year ago. Such a statement was also supported throughout the year in currency analyses published on Conotoxia.com.

What's next? The dollar's growth potential may come to an end

The long-pressed theory of a stronger dollar has proven its worth. Now, however, the arguments for a stronger currency are slowly coming to an end due to weakening economic data in the US, the growing risk of the Fed's rate cuts, and political turmoil.

Cinkciarz is a repeat winner of the global Bloomberg Rankings. The currency exchange company was named Player of the Year 2016 by Forbes magazine. The CEO of Cinkciarz, Marcin Pioro, was awarded Best Manager 2015 by Bloomberg Businessweek Poland. Reuters described the company as dominant in the Polish currency exchange market. The event that gathered the most attention from the media was the signing of the sponsorship contract with the NBA team, the Chicago Bulls.