Cinkciarz.pl with six victories in the Bloomberg's ranking 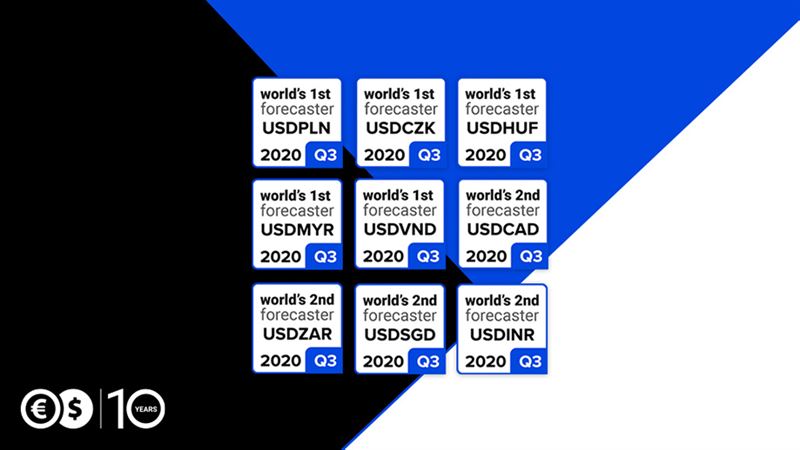 How and why exchange rates change – this is one of the domains of analysts at Cinkciarz.pl, a company belonging to Conotoxia Holding. In the latest edition of the Bloomberg ranking, Cinkciarz.pl claimed 14 places on the podium, of which six were the winning ones.

While forecasting currency exchange rate changes, Cinkciarz.pl competes with representatives of the largest and most prestigious banks and financial institutions around the world. And the Polish fintech stands out with its right predictions. In the review of last year, it is enough to mention that it left all its rivals far behind: https://conotoxia.com/news/news/cinkciarz-pl-58-times-on-the-bloomberg-s-podium-in-2019

Among the best with predictions regarding regions and pairs including USD

Once again, this year is also full of Cinkciarz.pl successes. In the ranking for Q3 2020, which was made available at the beginning of October, as many as 14 times, the brand associated with currency exchange and other online financial services ranks among the top three.

Analysts of Cinkciarz.pl most accurately identified how the exchange rates would change in the group of currencies of emerging countries in Asia, as well as pairs with the US dollar: the Czech koruna, the forint, the zloty, the ringgit (the currency of Malaysia) and the dong (the currency of Vietnam).

Cinkciarz.pl took second place on predictions how the Latin American currencies would change, but also in forecasts of pairs including the US dollar with: the Canadian dollar, the South African rand, the New Zealand dollar, the Singapore dollar, the Indian rupee and the Chilean peso. Apart from this impressive list, there is also a third place for the predictions of the exchange rate changes of the US dollar and the Colombian peso pair.

A strong dose of optimism at a time of pessimism

The year 2020 is marked by the coronavirus's influence on the world economy. The first wave of the pandemic also shook the currency market, increasing the value of the so-called safe havens, i.a. the US dollar.

"Lifting restrictions, re-opening of the economy, and unprecedented help from central banks have, however, caused more optimism among investors than economists expected. It was a period when the dollar was depreciating, and the losses were pared by currencies perceived as slightly more risky, including the zloty," commented Piotr Kicinski, Vice-President of Cinkciarz.pl.

In the last quarter of this year, concerns about the next wave of the pandemic, but also the US presidential election or the negotiations of the new trade agreement between the United Kingdom and the European Union may again dominate the currency world. How will this affect currency rates? Cinkciarz.pl analysts describe it in their daily analyses: https://conotoxia.com/news/daily-analysis