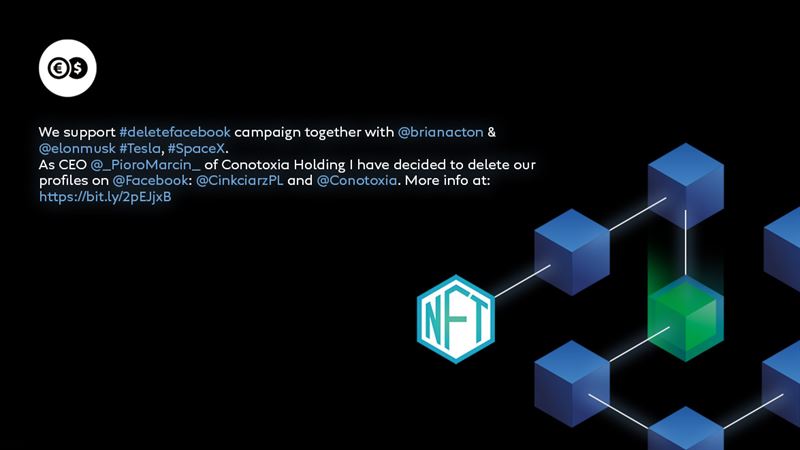 The CEO of Conotoxia Holding, which owns Conotoxia and Cinkciarz.pl brands, puts his first tweet up for auction. Marcin Pioro offers it in the form of a non-fungible token (NFT) on the Valuables platform.

Jack Dorsey, the co-founder of Twitter, has listed his first tweet at auction. Currently, its price now amounts to 2.5 million USD. Earlier, the tweets were sold by, i. a., Elon Musk or Mark Cuban. Now Marcin Pioro puts his tweet up for auction. It refers to the Conotoxia Holding CEO's first post on deleting Cinkciarz.pl and Conotoxia brand profiles from Facebook.

The auction victor will receive a certificate digitally signed and verified by Marcin Pioro along with metadata from the original tweet. The data will include information about when the tweet was published and its content.
Marcin Pioro's tweet was listed on Valuables, a marketplace for Twitter posts that was launched a few months ago. It is an initiative that allows users to broadcast, buy and sell their tweets in the form of non-fungible tokens (NFT). An NFT is a digitally signed and verified Twitter post. It can only be issued once but can be sold and repurchased multiple times.

Followers compare the purchase of tweets to the traditional collection of autographs or memorabilia. Such digital content can be a financial investment. NFTs use blockchain, the same decentralized database technology on which Bitcoins and other cryptocurrencies are based.
Listed tweet: https://twitter.com/_PioroMarcin_/status/1368494207669858305.