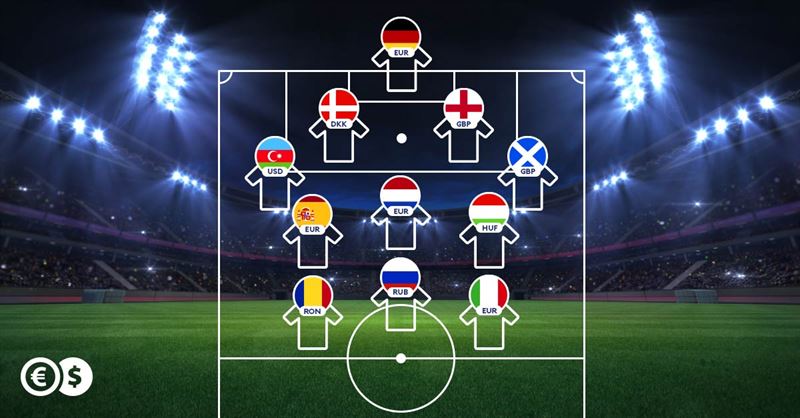 Euro 2020 means matches in 11 countries where 7 different currencies are used. For a football supporter travelling to their team’s games means a tremendous logistical challenge and the need to convert currencies frequently. Conotoxia experts suggest how to avoid getting lost in exchange rates and which financial issues to keep in mind.

In the times of a fading pandemic, sports fans can travel between host cities spread all over the Old Continent, and those travelling to Baku will even find themselves outside Europe - in Asia. Lots of sporting thrills, spectacular football arenas, metropolises full of attractions, sightseeing, different cultures and cuisines, with the addition of paying in other monetary units.

The tournament arenas are found in Copenhagen, Amsterdam, Bucharest, Budapest, Glasgow, Munich, Baku, St. Petersburg, Seville, Rome and London- a total of 11 countries that use 7 currencies (21 possible currency pairs and at the same time as 42 exchange variations - the so-called currency cross). These include the very popular euro (EUR) and the pound (GBP), but also the representatives of Poland's financial area, or in economic jargon, known as a basket: the ruble (RUB), the Romanian leu (RON) and the Hungarian forint (HUF).

"The most exotic currency of the tournament seems to be the Azerbaijani manat (AZN). However, the devil is not as black as he is painted. First of all, in Baku, where the group stage matches will be played and where one of the quarter-finals will take place, the dollar (USD) is widely accepted. Therefore, it is worth having the US currency at hand for the UEFA European Championship. Secondly, the manat does not belong to the currencies that exchange rates are subject to random fluctuations (unlike, for example, the Polish zloty or the Czech koruna). Its value is fixed against the USD, and for one dollar, we can buy 1.70 manat," explains Bartosz Sawicki, Market Analyst at Cinkciarz.pl, a part of Conotoxia Holding.The same goes for the other currency in the tournament, the Danish krone (DKK). Denmark's economy is very closely linked to the eurozone, and the two currencies have an enduring relationship. The latest EUR/DKK exchange rate stands at 7.44, which means that one euro is worth just under 7.50 Danish krone, and in reverse, one Danish krone is worth around 13.5 euro cent.

Some currencies with solid form, others unstable

In the tournament, we will also find highly volatile currencies, which can cause quite a surprise. It may be pleasant - in case of weakening, increasing our purchasing power. However, it can also be unpleasant - in the case of rising rates, as the appreciation of a given currency means that your bill in the pub or accommodation automatically increases.

"Such a situation is especially true for the ruble (RUB). It means that a trip to St. Petersburg might turn out to be a good surprise or a bad one for fans. Therefore, it is good to know that this year the Russian currency exchange rate is more than twice as volatile as the euro! On the other hand, the euro quotations to the zloty (Polish team playing in Seville) are stable. In May this year, the euro exchange rate changed only twice on a single day by more than 0.5%," the analyst points out.

Exchange rate fluctuations should not be worried about when travelling to Budapest, for the matches of group F and one meeting of 1/8 finals. The saying "Pole and Hungarian brothers be" can also be paraphrased to "zloty and forint brothers be". The situation of both currencies is usually very similar. This is due to the comparable characteristics of both economies, especially from the point of view of global financial centres.

As championships gain steam, the world slows down

"Speaking of financial centres and the "white collars" from Frankfurt, Paris or London, it is worth noting that a financial sector employee is also a human being and does not always distance themselves from soccer fever. The European Central Bank study "The Pitch Rather than the Pit: Investor Inattention During FIFA World Cup Matches" showed that during major football tournaments, it was as if the quotations of financial instruments were in slow motion, and the number of transactions on stock exchanges was significantly lower. For instance, when the South African national team ran out onto the pitch during the World Cup, the number of shares changing owners in that country was 45% lower than usual. Moreover, activity dropped further at key moments of the game, especially when goals were scored. Given this, it seems quite likely that the currency market will not be an arena of turbulent reshuffles in the coming month," comments Bartosz Sawicki.

The euro is the leader at the Euro2020. It shares the podium with the pound and ruble

There is no surprise that the currency of the same name dominates the tournament held under the Euro banner. Of the 51 championship matches, 16 are taking place where the common currency is in use: there are four group matches each in Rome, Munich, Amsterdam and Seville.The pound "hosts" 12 matches - 8 in London and 4 in Glasgow. However, the importance of the British currency at Euro 2020 is increased by the stakes of the matches. At Wembley, footballers will fight for the most important things, as both semi-finals and the final are held there.

The currency podium of Euro 2020 is closed by the ruble with 7 meetings. The other currency zones equally share 16 football matches between them.

If the Polish team makes it to Wembley...

In which currency will Polish fans pay when travelling for the national team matches? Rubles and euros will be helpful for the group stage in St. Petersburg and Seville. Further destinations depend on the results and position in the table.If Paulo Sousa's team advances to 1/8 round of the tournament, the currency basket may or may not expand with another currency. Let's go through the possible scenarios. After advancing from 1st place in the Group E table, which seems unlikely today, the pound would be useful for the match in Glasgow, while after taking 2nd place - the Danish krone for a trip to Copenhagen. In the event of an optional qualification from 3rd place, a return to Spain is possible, or the need to buy forints due to a potential 1/8 finals match in Budapest.

A victory and advancement of the Polish team to the quarter-finals could open the way to Baku, for example, adding manats or dollars to one's wallet. Another victorious game means an easy way to London and expenses in pounds sterling.

Let's sum up: if the Polish national team managed to reach the medal zone, it would play in cities with 3 foreign currencies, and in the case of winning the group, up to 5, when the path to the legendary English stadium will lead through Hungary and Azerbaijan.

A wallet that holds 7 currencies - how to manage it?

A supporter or sports journalist from Poland, travelling not only to matches of the Polish national team but also between all the tournament countries, must have 7 currencies on hand. However, one might be tempted to say that 6 currencies influence the thickness of their wallet: the euro, the pound, the dollar (the manat is linked to it), the ruble, the forint and the zloty.

Here are some tips for paying in different currencies when travelling abroad:

"What you should take home as a souvenir of your trip to the game are emotions and memories, not high commission or currency conversion bills. Buying foreign currencies in exchange offices or at airports in European cities can turn out to be burdensome and surprisingly expensive. As a general rule for foreign settlement, it is best to pay directly in the country's currency. The most convenient and safest solution seems to be a multi-currency card. It allows you to pay in the majority of the world's currencies, manage them in a mobile app, and withdraw cash from foreign ATMs without any fees. This may be an essential component of a football fan's kit, regardless of who we are rooting for," notes Robert Blaszczyk, Head of Strategic Clients Department at Cinkciarz.pl, a part of Conotoxia Holding.

Will the Poles be in form like the zloty?

Let's go back a few months in time. In March, many football supporters were tearing their hair out when, at the height of the third wave of the pandemic, Euro 2020 was in jeopardy. On top of that, exchange rates were rocketing, which could have increased the cost of planned trips to the tournament by up to 5%.

"At that time, the euro had been at its highest rate for about 12 years. Poles were paying about 4.70 PLN for the common currency. At the same time, the pound exchange rate was approaching 5.50 PLN. Within 3 months, the British currency rose by nearly 0.65 PLN," says Bartosz Sawicki.

Just before the start of the tournament, the currency market situation clearly changed in favour of the zloty. The euro dropped by more than 0.20 PLN, and the pound by more than 0.30 PLN. Unfortunately, the extremely soft stance of the Monetary Policy Council concerning the interest rates in Poland made the Polish currency give up all of the June appreciation at the end of last week and the beginning of this week. Moreover, it is losing its value again with each passing day. Let's hope the opposite happens to the Polish national football team!

*According to Conotoxia.com, as of 14.06.2021. Instead of the AZN/PLN exchange rate, we quoted the USD exchange rate.

Cinkciarz.pl is the Polish brand from the Conotoxia Holding. The Group’s specialised companies provide competitive, transparent and innovative online financial services. These include money transfers, multi-currency cards, payments, online currency exchange and access to Forex trading. You can find these solutions and more (for example, multi-currency lending service) at Conotoxia.com, the international brand from the Group. The brands sponsor popular sports teams such as the Chicago Bulls and the National football team of Wales.