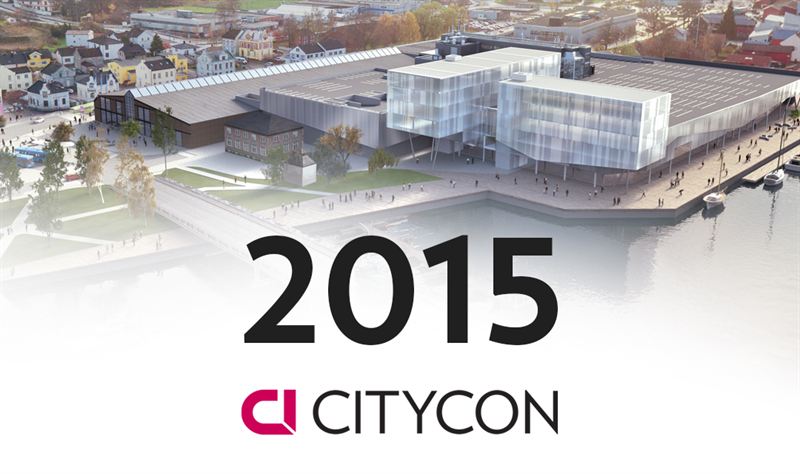 JANUARY – DECEMBER 2015
-Gross rental income increased to EUR 223.9 million (Q1–Q4/2014: EUR 189.4 million) mainly due to the Sektor acquisition, which contributed by EUR 43.0 million to gross rental income. Divestments decreased gross rental income by EUR 7.6 million.
- Net rental income increased by EUR 30.2 million, or 17.9%, to EUR 199.6 million (EUR 169.4 million) mainly due to the reasons explained above. Net rental income of like-for-like properties increased by EUR 1.2 million, or 1.1%, excluding currency changes.
- EPRA Earnings increased by EUR 31.1 million, or 31.2% mainly as a result of the Sektor acquisition. In addition, lower direct financing expenses of EUR 4.8 million increased EPRA Earnings. EPRA Earnings per share (basic) was EUR 0.173 (EUR 0.178).
- Earnings per share was EUR 0.14 (EUR 0.15).
- Net cash from operating activities per share increased to EUR 0.15 (EUR 0.12) mainly due to lower paid interest costs.
- The Board of Directors proposes to the Annual General Meeting a dividend of EUR 0.01 per share  for the financial year 2015, and an equity repayment of EUR 0.0275 per share from the invested unrestricted equity fund. Additionally, the Board of Directors will seek an authorization to decide in its discretion on the distribution of assets from the invested unrestricted equity fund for a maximum of EUR 0.1125 per share.

1) Citycon has changed its income statement format to be more comparable to its peers’. Citycon excluded turnover row and reclassified maintenance rents (EUR 53.4 million in 2015 and EUR 42.6 million in 2014) from gross rental income to service charges.
2) Result per share key figures have been calculated with the issue-adjusted number of shares resulting from the rights issue completed in July 2015.
3) Change-% is calculated from exact figures and refers to the change between 2015 and 2014.
4) Citycon has redefined net asset value calculations and presents net asset value after adjusting the goodwill, which has resulted from deferred taxes.

CEO, MARCEL KOKKEEL:
For Citycon, 2015 was a year with a high level of activities and events. We substantially improved the size and quality of our portfolio through the acquisition of Norwegian shopping centre owner Sektor, as well as continuous (re)development activities. The Sektor transaction was another milestone in Citycon’s history and made us a truly pan-Nordic actor and the largest shopping centre specialist in the Nordics.

Citycon’s financial performance over the full year was solid. The company’s result was supported by strong performance in Sweden and Norway as well as lower financing expenses. In Finland, despite the challenging retail environment, we managed to keep our performance stable through active management and strict cost control. This result again validates Citycon’s resilient business model with day-to-day grocery-anchored shopping centres.

The integration of the Norwegian operations has proceeded well and ahead of the original schedule. We expect to be able to deliver synergies that are larger than those initially communicated. This is especially due to the successful refinancing that has secured an overall Sektor refinancing cost of approximately 3%, which is lower than originally estimated.

Overall, Citycon’s operating performance over the year was positive, with like-for-like net rental income growing 1.1% and the occupancy rate increasing to 96.8%. Further quality upgrading of the portfolio has been a top priority for management. In addition to the Sektor acquisition, we successfully divested 17 non-core assets during the year for a total value of EUR 150 million and invested approximately EUR 170 million in (re)developments, including Iso Omena, IsoKristiina and Mölndal Galleria. Citycon’s improved portfolio quality and diversification as well as strong balance sheet were also recognised by Moody’s. Just after the closing of the financial year, Citycon’s long-term corporate credit rating was upgraded by one notch to Baa1.

In 2016, our main priorities will include consolidation and further integration of the Norwegian operations within Citycon, as well as a strong balance sheet within our long-term target loan to value range of 40–45%.  The year will be characterised by the current high level of (re)development activities, with space offline and new space coming online only starting from late 2016. This will put some pressure on earnings per share. From 2017, once the (re)developments and committed acquisitions have come online, we expect rental income and earnings to increase.

BUSINESS ENVIRONMENT
The macroeconomic environment in Sweden, Estonia and Denmark remained strong or relatively strong during 2015, while market conditions continued to be challenging in Finland and the Norwegian economy was impacted by the fall in the oil price. According to the European Commission (forecast), GDP growth in 2015 was 1.6% in the Euro area, 0,0 % in Finland, 2.1% in Norway, 3.6% in Sweden, 0.9% in Estonia and 1.2% in Denmark.

In 2016, the European Commission forecasts Euro area GDP growth to reach 1.7%. Sweden (3.2%) and Estonia (2.1%)  are showing stronger growth figures than the Euro area average and Denmark (1.7%) is in line with the Euro area forecast while the GDP growth for Finland (0.5%) is expected to remain relatively modest for a fifth year in a row and is dependent on both the recovery of the country’s export markets as well as domestic demand. Norway’s GDP is expected to grow by 1.5% in 2016, slightly below Euro area average.

In Finland prime shopping centre rents remained unchanged compared to the previous quarter and decreased by around 2% year-on-year. The weak outlook for retail sales limits the rental growth potential and a slight decrease in prime rents is forecasted to continue in 2016. In Norway, rents are expected to stay unchanged. In Sweden, prime shopping centre rents increased by around 2-3% over the last year with a similar growth rate forecast for the forthcoming year. In Estonia, downwards pressure on rents has increased due to intensifying competition and new supply and the rental growth at prime shopping centres is expected to remain below consumer price inflation during 2016–2017. (Source: JLL)

In Finland, despite of the sluggish development of the real economy, the high activity in the investment market has continued and the transaction volume almost doubled in 2015 compared to the previous year. The demand for prime properties remains strong and the demand for secondary properties has increased mainly due to new funds and the return of international investors. In Norway the transaction volume broke last year’s all time high reaching NOK 115 billion. The record high volume was due to favourable exchange rate of NOK, low interest rates and international investors’ increasing presence on Norwegian investment market. Outside the prime properties the transaction volume is expected to decrease slightly in 2016 due to stricter requirement for equity by Norwegian banks resulting financing to be harder to obtain. The prime yield is estimated to remain unchanged at 4.25%. In Sweden the transaction volume was significantly higher in 2015 than during previous years. The transaction volume of retail properties was SEK 23.5 billion. Prime shopping centre yields have moved in during 2015 to 4.25–4.5% followed by strong demand and low supply as well as continued low interest rates. Also yields for secondary shopping centres have decreased due to investors’ willingness to take on more risk and the lack of prime property investments. Investors are also seen to be willing to pay a premium for portfolios of assets compared to individual assets. In Estonia, prime yields are perceived edging close to their lows in the cycle (6.5–7.0%). However, yield compression is still expected to continue as real estate investment market remains attractive in the low interest rate environment. (Source: JLL)

RISKS
The company’s core risks and uncertainties, along with its main risk management actions and principles, are described in detail in the Financial Statements and in the upcoming Annual and Sustainability Report.

Citycon’s Board of Directors believes there have been no material changes to the key risk areas. The main risks are associated with property values, leasing, development projects, operations, environment and people and the availability and cost of financing.

These estimates are based on the existing property portfolio as well as on the prevailing level of inflation, the EUR-SEK and EUR-NOK exchange rates, and current interest rates. Premises taken offline for planned or ongoing (re)development projects reduce net rental income during the year.

FINANCIAL REPORTING SCHEDULE AND AGM 2016
Citycon’s Annual General Meeting will be held in Helsinki, Finland, on 16 March 2016 starting at 14:00 p.m.

Citycon will issue three interim reports during the financial year 2016 in accordance with the following schedule:

Citycon is an owner, developer and manager of urban grocery-anchored shopping centres in the Nordic and Baltic region, managing assets that total EUR 4.7 billion and with market capitalisation of approximately EUR 2 billion. Citycon is the No. 1 shopping centre owner in Finland and Estonia and among the market leaders in Norway and Sweden. Citycon has also established a foothold in Denmark.