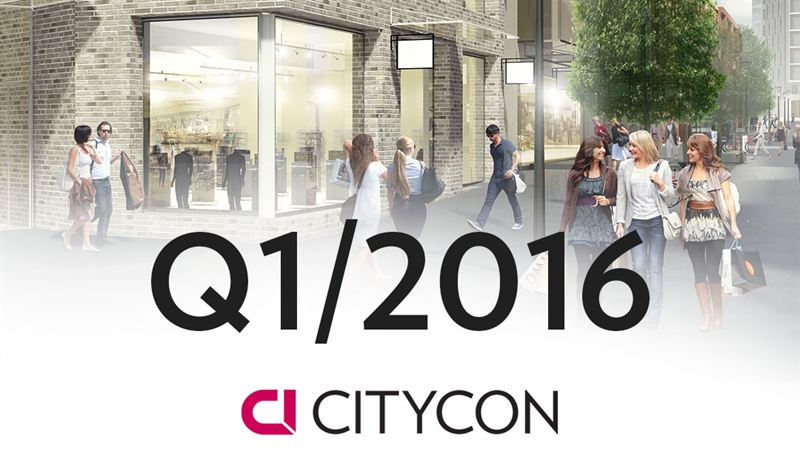 JANUARY-MARCH 2016
- Gross rental income increased to EUR 63.3 million (Q1/2015: 46.1) mainly due to the acquisition of Norwegian shopping centre company Sektor Gruppen AS (Sektor) in July 2015. Gross rental income of Citycon’s Norwegian operations amounted to EUR 20.7 million. The acquisition also increased net rental income by EUR 18.3 million.
- EPRA Earnings increased by EUR 8.7 million, or 32.1%, to EUR 36.0 million especially due to the acquisition of the Norwegian operations. EPRA Earnings per share (basic) decreased slightly to EUR 0.040 (0.043) due to the substantially higher number of shares.
- Earnings per share (basic) was EUR 0.06 (0.04). The increase was mainly a result of higher fair value gains.
- The outlook remained unchanged.

1) Calculated with the issue-adjusted number of shares resulting from the rights issue completed in July 2015.
2) Change from previous year. Change-% is calculated from exact figures.

CEO, MARCEL KOKKEEL:
The results for Q1 show a good start to 2016. The implementation of our diversified Nordic strategy paid off with the Norwegian and Swedish portfolio showing strong performance and balancing out the weaker retail environment in Finland. The quality of our Norwegian portfolio could be seen in its solid net rental income growth as well as strong valuation uplift. Overall, Citycon’s like-for-like net rental income growth, including Norway and Kista Galleria, showed growth of 0.6%. EPRA Earnings per share was close to last year’s level, whilst the average number of shares was 40% higher than in Q1/2015.

In 2016, our focus will remain on operational improvement and capitalizing on the synergies of a larger Citycon. We will also continue to upgrade the quality of our portfolio via asset rotation and (re)developments. The pre-leasing of the first phase of Iso Omena (re)development has reached over 90% and we look forward to the opening in August when the 28,000 sq.m. extension will come online. The grand opening of the 100,000 sq.m. shopping centre will follow in May 2017. The (re)developments and committed property acquisitions, totalling EUR 450 million, will begin contributing to earnings starting from Q3/2016. As a result, we expect rental income and earnings to pick up in 2017.

BUSINESS ENVIRONMENT
The macroeconomic environment in Citycon’s operating countries remained stable during the first quarter of 2016. Citycon’s operating countries are nevertheless currently on diverging macroeconomic courses: the business environment in Norway, Sweden, Estonia and Denmark remains strong or relatively strong, while the Finnish economy is still dragging behind other countries.

In 2016, the European Commission forecasts Euro area GDP growth to reach 1.7%. Sweden and Estonia are showing stronger growth figures than the Euro area average and Denmark is in line with the Euro area forecast while the GDP growth for Finland is almost stagnated and is expected to remain relatively modest for a sixth year in a row. Finland’s GDP growth is dependent on domestic demand, structural reforms and recovery of the country’s stagnating export markets. Norway’s GDP is expected to grow slightly below Euro area average due to the recent slowdown in the oil industry, but stable growth in exports and public consumption will support economic growth in the country.

Retail sales growth for the first two months of 2016 has been strong in Estonia, Norway and Sweden, positive in Denmark, but still slightly negative in Finland. (Source: Statistics Finland/Norway/Sweden/Estonia/Denmark)

In Finland the weak outlook for retail sales limits the rental growth potential and prime rents are forecasted to remain unchanged in 2016. Also in Norway, rents are expected to stay unchanged. In Sweden, prime shopping centre rents are forecasted to increase 2-3% during 2016. In Estonia, downwards pressure on rents has increased due to intensifying competition and new supply. (Source: JLL)

In Finland, the high activity in the investment market has continued and the transaction volume doubled in the first quarter of 2016 compared to the previous quarter. The demand for prime properties remains strong and the demand for secondary properties has increased. In Norway the transaction volume for 2016 might see a slight decrease due to stricter requirement for equity by Norwegian banks. In Sweden the transaction volume in the first quarter of 2016 was relatively low, however, the market remains attractive and supply is still limited which changes investors' risk-taking to more opportunistic investment strategies. Prime shopping centre yields have moved in during the last year. Also yields for secondary shopping centres have decreased due to easier finance availability, investors’ willingness to take on more risk and the lack of prime property investments. In Estonia, prime yields are perceived edging close to their lows in the cycle. However, yield compression is still expected to continue as real estate investment market remains attractive in the low interest rate environment. (Source: JLL)

RISKS
The company’s core risks and uncertainties, along with its main risk management actions and principles, are described in detail in the Annual and Sustainability Report 2015 and in the Financial Statements 2015.

Citycon’s Board of Directors believes there have been no material changes to the key risk areas outlined in the Annual and Sustainability Report 2015. The main risks are associated with property values, leasing, development projects, operations, environment and people and the availability and cost of financing.

DIVIDEND AND OTHER ASSET DISTRIBUTION
The AGM 2016 decided the below asset distribution for the financial year 2015:

These estimates are based on the existing property portfolio as well as on the prevailing level of inflation, the EUR-SEK and EUR-NOK exchange rates, and current interest rates. Premises taken offline for planned or ongoing (re)development projects reduce net rental income during the year.

Citycon is an owner, developer and manager of urban grocery-anchored shopping centres in the Nordic and Baltic region, managing assets that total EUR 4.7 billion and with market capitalisation of approximately EUR 2 billion. Citycon is the No. 1 shopping centre owner in Finland and Estonia and among the market leaders in Norway and Sweden. Citycon has also established a foothold in Denmark.