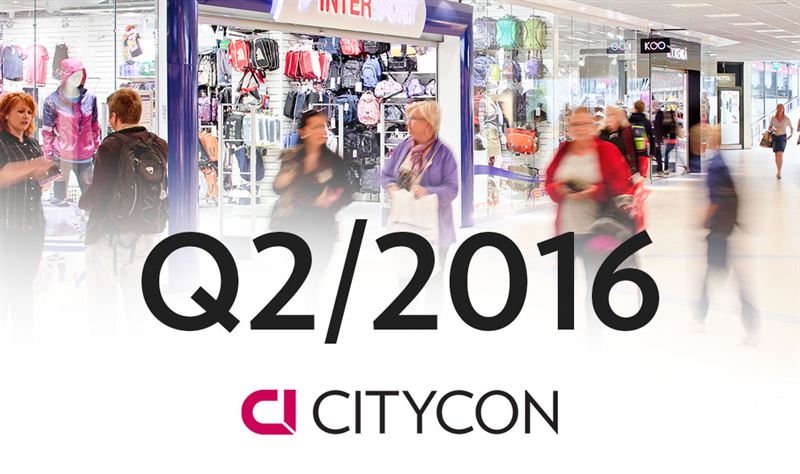 CEO, MARCEL KOKKEEL:
The first half of 2016 showed stable financial results driven by the good performance in Sweden and Norway. Despite the weaker economic environment in Finland we still see good tenant demand for high quality properties. Our like-for-like net rental income including Norway and Kista Galleria was 0.9%.

The solid demand for prime properties is reflected in our leasing success in Iso Omena where we signed an agreement with Zara, the first and only one in the western Helsinki area. We have been successful in attracting appealing fashion, design and restaurant brands to Iso Omena that, so far, have exclusively been featured in central Helsinki. The first phase of Iso Omena, to be opened in mid-August, is now 95% pre-let.

The integration of the Norwegian operations has proceeded well and is completed. We have been able to achieve much better results than initially targeted. During the quarter, we completed a cost savings programme of EUR 5 million through further reorganisation measures and synergies. The savings, to be achieved in 2017, are in addition to the already materialised administrative cost savings in Norway of approximately EUR 1.5 million.

We successfully continued the recycling of capital in line with our strategy to focus on urban, grocery-anchored shopping centres. During 2016, we have divested a shopping centre in Tallinn and a portfolio of five assets in Finland for a total value of EUR 100 million, both above their IFRS fair value. Citycon aims to divest an additional EUR 200-250 million of non-core assets, mainly in Finland, within the coming 1-2 years.


BUSINESS ENVIRONMENT
The macroeconomic environment in Citycon’s operating countries remained unchanged during the second quarter of 2016. The countries are still on diverging macroeconomic courses: the business environment in Norway, Sweden, Estonia and Denmark remains strong or relatively strong, while the Finnish economy is showing weaker growth.

In 2016, the European Commission forecasts Euro area GDP growth to reach 1.6%. Sweden and Estonia are showing stronger growth figures than the Euro area average while Norway and Denmark are predicted to grow slightly below the Euro area forecast. The GDP growth for Finland is still expected to remain modest, although the trend is positive also in Finland. Finland’s GDP growth is dependent on domestic demand, structural reforms and recovery of the country’s stagnating export markets.

Retail sales growth for the first five months of 2016 has been strong in Estonia, Sweden and Norway, mildly positive in Finland, but negative in Denmark. (Source: Statistics Finland/Norway/Sweden/Estonia/Denmark)

In Finland the demand for prime properties is strong and the demand for secondary properties has increased. In Norway the investment market is expected to remain active and yields to remain stable in the short-term. In Sweden the investors' risk-taking has changed to more opportunistic direction and besides prime shopping centres, also yields for secondary shopping centres have decreased. Prime yields are also expected to continue decreasing in Estonia. (Source: JLL)


RISKS
The company’s core risks and uncertainties, along with its main risk management actions and principles, are described in detail in the Annual and Sustainability Report 2015 and in the Financial Statements 2015.

Citycon’s Board of Directors believes there have been no material changes to the key risk areas outlined in the Annual and Sustainability Report 2015. The main risks are associated with property values, leasing, development projects, operations, environment and people and the availability and cost of financing.

DIVIDEND AND EQUITY REPAYMENT
Citycon’s dividend paid in 2016 for the financial year 2015 and equity repayment in 2016:

The specified outlook acknowledges the impact of the completed non-core portfolio divestment in Finland as well as the weaker Norwegian krone and the impact of the metro delay in Iso Omena. These estimates are also based on the existing property portfolio as well as on the prevailing level of inflation, the EUR-SEK and EUR-NOK exchange rates, and current interest rates. Premises taken offline for planned or ongoing (re)development projects reduce net rental income during the year.


Citycon is an owner, developer and manager of urban grocery-anchored shopping centres in the Nordic and Baltic region, managing assets that total EUR 4.7 billion and with market capitalisation of close to EUR 2 billion. Citycon is the No. 1 shopping centre owner in Finland and Estonia and among the market leaders in Norway and Sweden. Citycon has also established a foothold in Denmark.