Designated the "Queen of Lesbian Pulp" for authoring several landmark novels beginning in 1957, Ann Bannon's work defined lesbian fiction for the pre-Stonewall generation. Unlike many writers of the period, however, Bannon's stories broke through the shame and isolation typically portrayed in lesbian pulps, offering instead women characters who embraced their sexuality. An HBO series is in development based on The Beebo Brinker Chronicles.

Ann Bannon has received numerous awards: she was named one of Equality Forum’s LGBT Icons 2012; she received the 2008 Pioneer Lambda Literary Award from the Lambda Literary Foundation; the 2008 Alice B. Reader’s Appreciation Award, the first annual Trailblazer Award, from the Golden Crown Literary Society, 2005; the Distinguished Service Award for Faculty Excellence by the Alumni Association of Sacramento State University, April 2005; a “Pressie” for Best Author of the Year 2003, by the Chicago Free Press; a Certificate of Honor by the Board of Supervisors City and County of San Francisco, February 2000; Outstanding, Pioneering Contribution to Lesbian and Gay Writing by Outlook National Lesbian and Gay Quarterly, March 1990, and she was inducted into the Saints and Sinners Literary Festival Hall of Fame in 2004.

I am a Woman

Women in the Shadows

Journey to a Woman

We are proud to announce that for the first time these pulp classics have been made into audiobooks, narrated by Kate Rudd.

Kate Rudd is a single mom, actress, and connoisseur of all things art and nature, in that order.  She lives with her daughters (two human, one canine) near the spectacular shores of Lake Michigan where sunsets and sledding hold equal value.  Kate starred in the acclaimed web series Perks, has appeared in several films, and her recent work as an audiobook narrator has won high praise from both critics and listeners.  She was recently nominated for an Audie Award for her performance in Bruiser, while her narration of The Fault in Our Stars has garnered an incredible amount of favorable press, especially among fans of author John Green.

Cleis Press publishes provocative, intelligent books in the areas of sexuality, LGBT studies, erotica, fiction, and human rights. Viva Editions are books that inform, enlighten, and entertain. While Viva Editions is a line of books that are as fun as they are informational, the intention behind Viva is very serious—these are books that are truly helpful and intended to enhance people's lives. 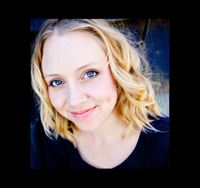