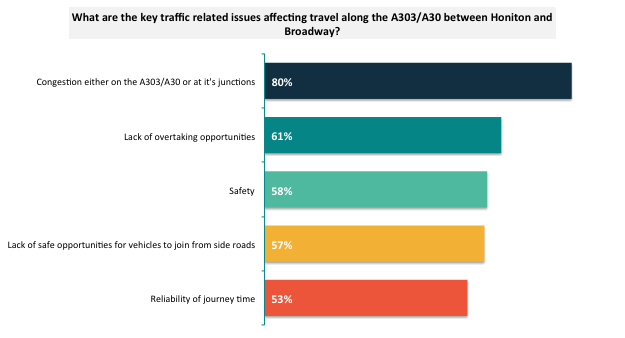 A survey of local opinion designed to assist local authorities to better understand the views of communities, road users and businesses along a localised section of the A30/A303 has published its key findings.

The survey carried out by Devon County Council supported by Somerset County Council, aimed to assess issues and preferred options for improvement along the stretch of road between Honiton and Broadway.

The survey is part of a wider campaign, led by Somerset, Devon and Wiltshire and Dorset Councils, as well as the Heart of the South West Local Enterprise Partnership, to lobby and persuade government to improve the entire A303/A358/A30 road corridor between Honiton, Taunton and Amesbury.

Key findings of the survey  include:

Congestion on the road itself or at its junctions emerged as the leading key traffic related issue affecting travel between Honiton and Broadway. Almost half of travellers surveyed had personally experienced congestion, making it the main problem for A30/A303 road users.  Only 3% of respondents to the survey felt that there were no issues with the road in its current condition.

A lack of overtaking opportunities and concerns over safety, were common key issues that affect travel along the route. Over a quarter of respondents had direct experience of situations which led them to believe that sections of the road are unsafe, while just over a fifth of travellers had encountered slow journey times due to Heavy Goods Vehicles.

Andrew Leadbetter, Cabinet Member for Economy and Growth at Devon County Council said: “We are pleased that the Government is undertaking a feasibility study to consider future improvements along the whole length of the A303, and we are keen to understand full the extent of problems faced by businesses, road users and communities using the section of the road which runs between Honiton and Broadway. This will enable local people to influence the preferred solution for this section of the route which runs through Devon. This feedback is crucial if we are to put forward an effective business case to Government for improvements to this section of road. In addition, it will also help us put together affordable and deliverable options that are sensitive to the protected landscape.

“The A303 is a vital connection into the South West, but one that has been long recognised as slow and unreliable, having a detrimental impact on the economic growth of the region. We need to identify a strategy that improves the traffic conditions of the route, increases safety and resilience while bringing economic growth to the area.”

Councillor David Hall, Deputy Leader for Somerset County Council said: “These findings underline the serious shortcomings of this major route to the South West and demonstrate that there is real support for improvement, even by stages. We are working hard with our partners on our case with Government to improve the whole route as it is a key strategic artery into the West Country. The economic benefits of upgrading this road are very significant for the entire region. We eagerly look forward to hearing Government’s response.”

According to the survey, the top three priorities should be the introduction of more overtaking opportunities, improvement junctions to resolve current visibility and congestion issues and changes to the speed limits.

Looking at specific locations along the route, 1 out of 5 respondents indicated they encounter issues in the Buckland St Mary area, including the staggered crossroads by the Eagle Tavern. Many felt this location was therefore a principle area where improvements should be targeted.

Although unlikely to be implemented, a dual carriageway was the third most popular suggested improvements, although almost 25% of respondents actively oppose dualling of the route.

The consultation is running in parallel to a study carried out by the Highways Agency, looking at the options for improvement along the entire corridor that runs from Devon to Hampshire.

Exhibitions events are expected to run during July to set out progress of the study so far and detail the next steps to improve the route between Honiton and Broadway. Dates and locations will be confirmed shortly.

More details can be found on the www.a303ahead.co.uk website.

Coast Marketing and Communications We're an agency based in Cornwall by the coast, unsurprisingly. Covering all aspects of communications and marketing, including public relations, we're an experienced and professional team who enjoy a challenge and take pride in our work. We could go on and on about how talented, exceptional and generally wonderful we are, but don't just take our word for it. Ask our clients. After all, you'd expect us to say good things about ourselves in our line of business.  So, enough about us. Come on in. The water's lovely.