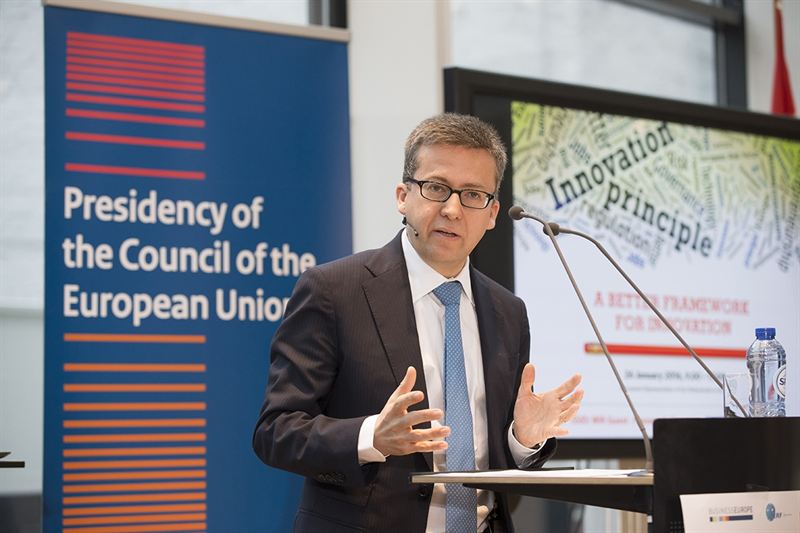 “It’s time to put The Innovation Principle’ at the heart of Europe’s economic revival,” that was the key message at a high-level industry conference in Brussels last week.

Carlos Moedas, European Commissioner for Research, Science and Innovation said barriers between interdisciplinary structures must be removed to quicken innovation and accelerate competitiveness. He said it’s about process, managing risk, education and a rebranding of Europe’s innovation mind-set.

Article Free for Immediate Use: Wednesday 10th February 2016: Europe is still lagging behind Asia and the United States when it comes to innovation and economic success; the EU is too slow to recognise powerful new products and services, often hindered by ‘the precautionary principle’ which can bury new concepts beneath a mountain of environmental and consumer protection.

The ‘Innovation Principle’ attempts to rebalance economic needs with precautionary concerns. At its core, the innovation principle is a mission to ensure all EU policy making adopts a ‘Do No Harm’ mentality to Europe’s innovation capacity, from SME’s right across to the industrial giants.

The conference, “A better framework for innovation”, was host by BusinessEurope, the EU’s leading business lobby group. Speakers from leading industrials giants such as Volvo, Bayer and BASF, joined European Commission Vice-President Jyrki Katainen (a former Finnish Prime Minister) and Carlos Moedas, the European Commissioner for Research, Science and Innovation, to pitch a new direction for Europe’s regulatory pathways.

The industrials made this pitch – put ‘The Innovation Principle’ at the heart of decision-making across all policy sectors. The Innovation Principle was described as a simple, straightforward idea, requiring that whenever the EU’s institutions consider policy or regulatory proposals, the impact on innovation should be fully assessed and addressed.

Responding to the conference, Mario Pinca of Copma, the Italian healthcare and leading services company, said: “The Innovation Principle seems like common sense, but too often EU policy stifles innovation – Europe’s economy and consumers are suffering because of an overly cautious policy-making approach which favours the status quo.”

The conference heard how one of the key determinants of business success in today’s fast moving markets is the capacity to innovate, adapt and exploit new technologies and business models.

Pinca added: “At Copma we believe that existing technologies, such as our international peer reviewed PCHS antimicrobial cleaning system, need to be evaluated not just in the context of The ‘Precautionary’ Principle, but also The Innovation Principle.

“Our probiotic-based sanitation system encountered opposition from the entrenched interests of the chemical cleaning lobby which should, themselves promote the research and the innovative development. Instead, the evolution of the regulatory and legislative framework is overly cautious, with a pace of change which fails to understand the pace of innovation.”

“Many healthcare innovations across Europe are forced to compete on an uneven playing field. For the sake of Europe’s economy, its patients and its citizens, the European Commission has to put The Innovation Principle at the heart of government, so that Europe can become an innovation superpower, instead of playing global catch-up with the United States and Asia.”

Conference sponsors, The European Risk Forum, said that if adopted and used well, the principle will raise awareness of the link between regulation and innovation; it will signal to global investors the commitment of the EU to promote innovation, improving business confidence.

Brian Maguire is a Brussels-based journalist, producer and broadcaster.

This blog article is provided free for use under the Creative Commons standard licence.