Crown is the “right choice” for fuel-cell technology 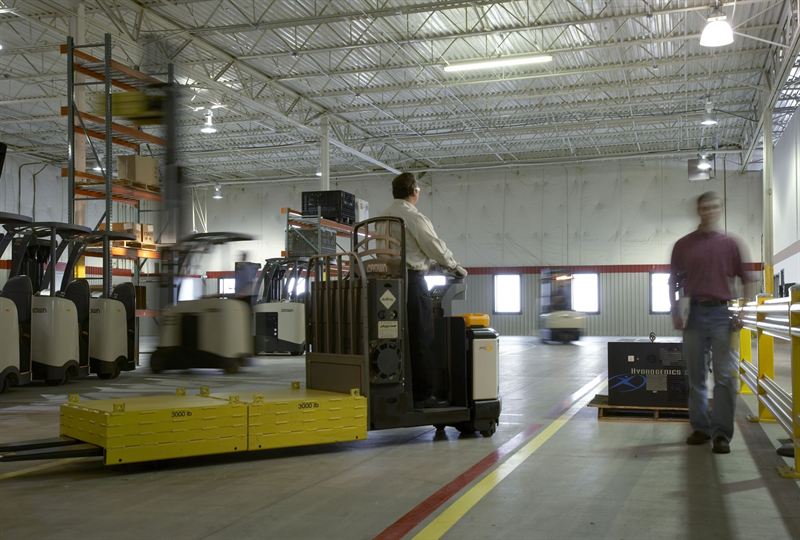 September 26, 2011 – The past few years have seen massive investment in the development of fuel-cell technology, especially in the USA. Crown has been researching fuel-cell forklift applications for more than seven years and in October 2008, the company set up its own dedicated fuel-cell research and test centre. Crown also initiated the industry’s first fuel-cell qualification programme and has now qualified more than 20 lift truck models to operate with fuel-cells in the American market. Many of these lift trucks are already in use at customer locations throughout Canadaand the United States. Now a new fleet of 35 Crown FC 4500 Series counterbalanced lift trucks, fitted with fuel cells, has been delivered to Coca-Cola Bottling Co. Consolidated, further demonstrating the lift-truck manufacturer’s leadership position in the strategic deployment of fuel cell-powered forklifts.

Crown has long believed that technologies should only be launched onto the market once they are fully developed, so it was clear from a very early stage that lift trucks should only be fitted with fuel cells once they were capable of matching the high standards of performance, efficiency and safety attained by conventional battery-driven vehicles. Crown set up a research and test centre near its U.S headquarters in Ohio, dedicated exclusively to fuel-cell technology research, and the company is also the first lift-truck manufacturer to set up a qualification programme for fuel cells. Crown works closely with government institutions which have been supporting the development of fuel-cell technology in the USA through state-aid programmes for many years.

This commitment to fuel cell technology research played a part in Coca-Cola Bottling Co. Consolidated’s decision in favour of Crown.

“As one of the first Coca-Cola bottlers to make the move to use fuel-cell lift trucks, it was important that we set the standard by partnering with a provider that has conducted significant research on the technology and has a strong commitment to its customers’ sustainability initiatives as well as its own,” explains Dave Brown, Vice President of Manufacturing at Coca-Cola Bottling Co. Consolidated. “After visiting Crown’s fuel-cell research centre and touring its manufacturing areas, we were confident Crown was the right choice.”

For the past few years, the company has been researching the performance and sustainability issues associated with the use of fuel cells in lift trucks, working closely with leading fuel-cell manufacturers to optimise both aspects. Exhaustive testing has produced valuable data about the ways lift trucks must be adapted so they can be fitted with the new technology – now customers can be confident that their fuel cell-powered lift trucks meet the same high standards as conventional electrically powered lift trucks. This also applies to the fuel cell-powered fleet of FC 4500 Series counterbalanced lift trucks that has just been delivered to Coca-Cola Bottling Co. Consolidated.

Converting a lift-truck fleet to fuel-cell technology does require some additional investment in warehouse infrastructure – to provide suitable storage facilities for hydrogen, for example. But this one-off capital investment can usually be offset against the benefits of introducing the new technology, such as a possible increase in productivity. Fuel cells can power lift trucks with a steady, non-stop flow of energy for up to two shifts in a row. And with minimal training, lift-truck drivers can easily look after refuelling the trucks themselves.

“Hydrogen refuelling takes approximately two to five minutes, while replacing a depleted battery can take as long as 40 minutes,” explains Tim Quellhorst, senior vice president, Crown Equipment. “What’s more, in demanding facilities batteries may need to be changed after as little as six hours of runtime.”

The company’s research into the use of fuel cells in materials handling is just one aspect of the Crown ecologic™ programme, which focuses on the sustainability of products, manufacturing processes and services. Together with the company’s fuel-cell qualification programme, this research work serves to highlight the years of experience and expertise that underlie Crown’s use of fuel-cell technology. At the same time the high quality of the Crown fuel-cell forklifts already in use is setting new standards in the American and European lift-truck markets. More details can be found at http://www.crown.com/Europe/about/ecologic_index.html

Crown Equipment Corporation is one of the world’s largest manufacturers of electric lift trucks. Since the company first started building material handling equipment in the 1950s, Crown products have won numerous industry accolades. From the smallest hand pallet trucks through to the largest narrow-aisle turret trucks, Crown uses innovative engineering and high-quality manufacturing techniques to respond to the full range of customer needs, achieving exceptional standards of reliability and productivity.

Crown has a unique corporate structure, characterised by the highest levels of vertical integration in the industry. This enables the company to keep tight control of development, production and customer support. Up to 85 percent of the components used in Crown products are developed and manufactured by Crown in custom-built facilities. Crown is committed to offering customers above-average added value that reduces TCO (Total Cost of Ownership).

Crown Equipment Corporation is a family-owned business with head offices in the USA, Australia and Germany. Crown now operates a global distribution and service network with more than 70 fully-owned subsidiaries and over 300 independent dealerships.

You can find out more about Crown at www.crown.com or from: