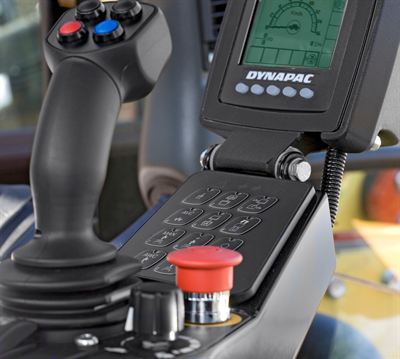 Cwmfelinfach, UK – 27th September, 2012 – Penny + Giles - a business unit of Curtiss-Wright Controls and a designer and manufacturer of position sensors, solenoids, and joystick controllers – is supplying its JC6000 joystick to Dynapac in Sweden, for the company’s new CA5000 range of Soil Compactors.

The order is the latest in a seven year relationship that began when Dynapac, part of the Atlas Copco Group and one of the world’s most experienced manufacturers of compaction and paving equipment, first approached Penny + Giles in 2005 with an invitation to join a competitive tender to find a new joystick controller for a new 7 to 12 tonne range of tandem rollers.

The tender also required a change from mechanical to electronic joysticks, prompted by some issues with the driver controls in earlier cabs. These were resolved by the selection of the Penny + Giles JC6000 joystick, which was first specified as part of the new cab control system for a Tandem Asphalt Roller. The cab and JC6000 have since been rolled out across many new models, new platforms and other, larger machines, ranging from seven to twenty tonnes operating mass.

Commenting for Dynapac, electrical development engineer Markus Karlowsky says that while price was an important issue, the Penny + Giles JC6000 is a very robust joystick that best met the specification and helped to resolve the control issues.

The joystick’s primary function is as a speed controller – pushing the handle forward moves the machine forward and the farther it is pushed the faster the machine accelerates. Pulling back provides the same function in reverse. In addition, the JC6000 also features a ‘friction-hold’ mechanism that allows operators to maintain the vehicle at a constant speed when the joystick is released, and leaving them free to steer with a conventional steering wheel while monitoring the progress of the operation and focusing on other functions. For example, one of the functions available via buttons on the joystick controller’s handle is the control of jets, which are used to water-lubricate the drums to prevent them sticking to the material being compacted.

Penny + Giles engineers also fulfilled the force level requirements specified by Dynapac for the joystick friction-hold feature, rather than a conventional spring-loaded lever that automatically returns to a neutral position when released.

A further, and not insignificant, benefit of the JC6000 joystick controller is its full-grip handle, which is similar to that fitted to mechanical joysticks and therefore familiar to operators, making it easier for them to switch to the Penny + Giles electronic controller.

Since 2005 Penny + Giles has supplied Dynapac with several thousand JC6000’s. Initially, the joystick controllers were delivered to the Dynapac plant in Sweden and more recently have been supplied to Dynapac’s after sales division in Belgium and, since Dynapac began manufacturing in China, have also been supplied to the plant there.

It is available with single- or dual-axis configurations and can be supplied with non-contact Hall effect sensors or long life potentiometer tracks. The compact size, high lever strength and superb proportional control of the JC6000 joystick controller makes it ideal for applications where strength, reliability and handle functionality are important. Features include a rugged design with superior lever strength, a range of ergonomic handle designs, analog or CAN outputs, sealing above panel to IP66 and safety features including switch/logic functions.

The Curtiss-Wright Controls Industrial (www.cwc-ind.com) business unit is formed from a group of established specialist companies who are experts in the design, testing, manufacture and marketing of a range of components and systems for the safe and reliable operation and control of mobile and static machinery - especially advanced electric-powered vehicles, heavy trucks, buses, off-road and military vehicles and motorsport. Penny & Giles Controls (www.pennyandgiles.com)Delivers rugged component level solutions using the latest non-contact sensing technologies, and specializes in rotary, linear and tilt position sensors; joysticks; solenoid actuators and associated electronic signal conditioning. The business was first established in 1956 and pioneered aerospace sensing and data recording technologies with a reputation for quality, performance and reliability. The aerospace business continues today within other Curtiss-Wright business units. The company joined Curtiss-Wright in 2002. PG Drives Technology (www.pgdt.com)Delivers rugged subsystem solutions including programmable controllers and drives used in a wide variety of advanced electric-powered vehicles such as forklifts, pallet loaders, mobility scooters and wheelchairs, serving the industrial and medical markets. These products deliver precise variable power from batteries to electric drive motors, and are fully programmable to suit various motor profiles, voltages and power levels. The business was first established in 1976 and was originally part of the Penny & Giles group of companies. The company joined Curtiss-Wright in 2012. Williams Controls (www.wmco.com)Delivers rugged component level solutions and is a leading designer and manufacturer of highly-engineered electronic sensors and electronic throttle controls for heavy trucks, off-road equipment, and buses. The business was first established in 1937 and pioneered the development of the first electronic throttle control for large diesel engines, quickly becoming the world leader in the design and manufacture of electronic throttle controls for trucks and buses. The company joined Curtiss-Wright in 2012. Further information is available from the Curtiss-Wright Controls Industrial website (www.cwc-ind.com) or by calling +44 (0)1425 271444. 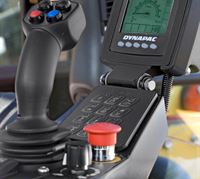