The Azerbaijani Model of Inter-Faith Dialogue and Tolerance 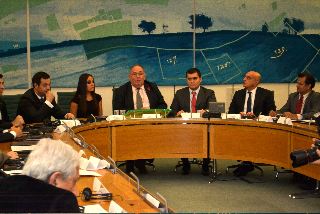 Azerbaijan has long been a nation that brings together members from the three major faiths in relative harmony. As such, it stands as a beacon of peace and tolerance, and its model is one that all cultures can observe and learn from.

In partnership with The State Committee for Religious Association of the Republic of Azerbaijan and the Embassy of Azerbaijan UK, the Odlar Yurdu Organisation and the Anglo-Azerbaijani Society hosted a panel discussion on inter-faith dialogue and religious tolerance at Portcullis House in Westminster on Thursday 8 November. Panellists spanned the three major faiths; Judaism, Christianity, and Islam; and spoke on a range of topics, from commitment to religious traditions to conceptual foundations of inter-faith dialogue and tolerance.

The conference was attended by Azerbaijanis and Westerners alike including members of press, members of parliament, think tank representatives and business executives. Notable guests included Lord Fraser of Carmyllie, HE Ambassador Fakhraddin Gurbanov of Azerbaijan and Mrs Leyla Aliyeva, who gave the key note speech. “Azerbaijanis are absolutely straightforward and sincere in their belief that people can pursue their own faith,” commented Lord Fraser. This was echoed by host and moderator Ilham Naghiyev, who lauded the country’s “strong tradition of hospitality”, which resulted in Azerbaijan “recognising the importance of further promoting multiculturalism.”

Commenting on the importance of such a conference, Aliyeva said: “We live in a world of great challenges; our best hope is mutual tolerance and understanding. To us, religious and cultural tolerance is not an achievement, it is the only way of life we have ever known”

After the conference, guests reconvened at BAKU restaurant in Knightsbridge for cocktails and an exclusive view of Azerbaijan – Land of Spirituality and Tolerance an art exhibition brought to the UK especially for the conference.

Event:               Prospects of European Multiculturalism: The Azerbaijani Model of Inter-Faith Dialogue and Tolerance

The Odlar Yurdu Organisation (OYO) is a non-profit, non-partisan, non-governmental organisation founded in 2008 by Azerbaijani students in London. It functions as an organisation promoting public awareness of Azerbaijani issues in Europe, as well as strengthening the diaspora activity of Azerbaijanis living in Europe. OYO engages in a number of activities, including the promotion of cultural exhibitions and festivals, and also publishes a newspaper, books and produces films on Azerbaijani history and literature. It supports talented Azerbaijani musicians and artists in Europe, and seeks to establish partnerships with top-tier academic centres in Europe.

The Anglo-Azerbaijani Society works to draw together cultural, charitable and other links between Azerbaijan and the UK. Founded in 1997 with the aim to support Azerbaijani-British relationships in all spheres it also to facilitates charitable endeavours in Azerbaijan and also works to increase awareness of Azerbaijan in British society. The non-political organisation is funded by corporate sponsors and members who work closely with both the Azerbaijan Embassy in London and the British Embassy in Baku and have close links with UK Trade Partners and SOCAR (State Oil Company of the Azerbaijan Republic).

The State Committee for Work with Religious Organisations of Azerbaijan Republic