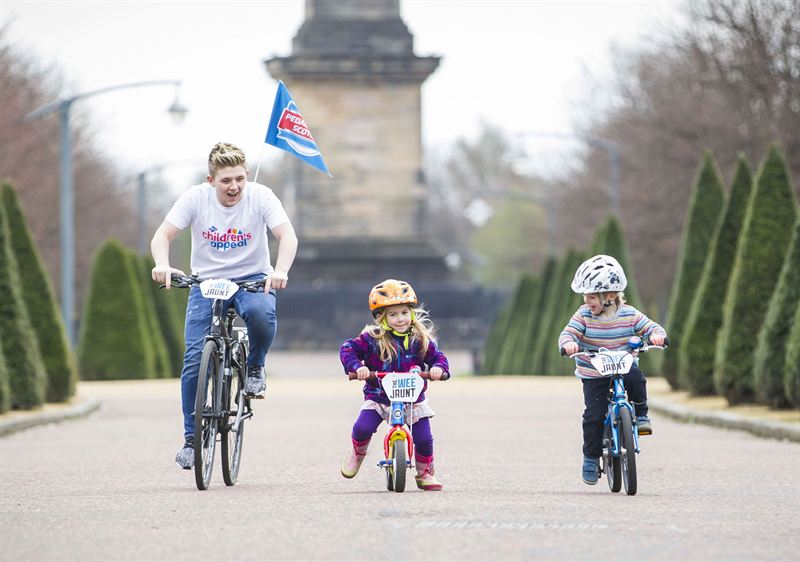 X Factor runner-up, Nicholas McDonald, Calvin (4) and Beatrix (4) were in Glasgow to launch the Wee Jaunt Glasgow bike ride – part of the Pedal for Scotland series of events.

Suitable for all ages and abilities, the 6 mile Wee Jaunt Glasgow, starting in Glasgow Green and taking in the Sir Chris Hoy Velodrome on a traffic free riverside route, will take place on 12thJune 2016 kicking off this year’s Bike Week celebrations in Scotland.

Nicholas will be raising funds for children and young people in Scotland affected by poverty by supporting the STV Children’s Appeal, Pedal for Scotland’s Official Charity Partner.  Wee Jaunt participants will also be able to raise money for the Appeal. Last year’s participants raised over £112,000 for the charity, supporting projects across Scotland including a number in Glasgow and the West of Scotland.

Nicholas said, “Not only is The Wee Jaunt a fun day out, especially for the wee ones – it’s a fantastic way to involve all the family in raising money for the STV Children’s Appeal and give a boost to kids that need our help.”

Keith Irving, Cycling Scotland chief executive, said, “The Wee Jaunt Glasgow promises to be a fun-filled day for all the family, and an excellent introduction to travelling by bike, be it for work, school or pleasure. It’s the perfect way to celebrate Bike Week in Scotland and will allow people of all ages and abilities enjoy all the benefits of cycling. A traffic free route means participants can relax and soak up the atmosphere of the day.”

Elizabeth Partyka from the STV’s Children’s Appeal said: “What a better way to spend a Sunday – having fun, getting fit and raising money for The STV Children’s Appeal. I’m looking forward to seeing all the cyclists - big and small - come together to help the children and young people of Scotland.”

The Wee Jaunt Glasgow is the first of the Pedal for Scotland events taking place throughout 2016, including two other Wee Jaunt rides in Edinburgh and Aberdeen, the 50 mile Classic Challenge from Glasgow to Edinburgh and the 110 mile Big Belter. Family friendly Wee Jaunt rides will give even more people a chance to be part of Scotland’s biggest bike event, regardless of age or ability.

Find out more and register online for the Wee Jaunt Glasgow at www.pedalforscotland.org.

2. Transport Scotland is the national transport agency for Scotland, delivering the Scottish Government's vision for transport. Find out more at www.transportscotland.gov.uk

3. Pedal for Scotland was established in 1999 as a way to encourage more people to cycle. Cycling 50 miles in a day demonstrates the considerable distances it is possible to achieve by bike, and encourages people to leave the car at home for short journeys.

Cycling Scotland is the nation’s cycling organisation. Working with others, we help create and deliver opportunities and an environment so anyone anywhere in Scotland can cycle easily and safely.

Cycling Scotland is a recognised Scottish Charity no. SC 029760.

The STV Children’s Appeal has helped over 30 projects in the Glasgow local authority and over 150 projects in Scotland, all providing help and support to children and young people affected by poverty.

It was Angels by Robbie Williams that actually made him think he wanted to be a singer, along with Celine Dion’s My Heart Will Go On and Mariah Carey’s Hero.

And although his first performance might not have been the big deal most singers crave, his sister Antonia’s first birthday party was the perfect place for Nicky to perform, even if it was My Heart Will Go On!

A sneaky arrangement (by his Mum) with the school head teacher about Nicholas performing at the Leavers Day concert of his primary school, was a risk worth taking.

Signed up by his head teacher, Britain’s Got Talent followed, where 12 year old Nicholas made it to the semi finals. But it was an encouraging word from Simon Cowell that made him finally give singing a proper go a few years later…

Hop, skip and a Flying Without Wings later, and 17 year old Nicholas McDonald made it to the final of The X Factor.

Nicholas began work on his debut album, In The Arms of An Angel, a selection of songs that Nicholas performed on The X Factor plus three original tracks, including debut single Answerphone, soon after the final of the show.

With work having already commenced on Nicholas 2nd album, Nicholas said “I am so excited for everyone to hear it. I hope everybody likes it as much as I enjoy making it”.

And you can understand his excitement with musical icons including Michael Jackson, Bruno Mars, One Direction and surprisingly Justin Bieber.

Bike Week
Bike Week is an annual opportunity to promote cycling, and show how cycling can easily be part of everyday life by encouraging ‘everyday cycling for everyone’. Demonstrating the social, health and environmental benefits of cycling, the week aims to get people to give cycling a go all over the UK, whether this be for fun, as a means of getting around to work or school, the local shops or just to visit friends. The 2016 event will take place 11-19th June.

Find out more at www.bikeweek.org.uk 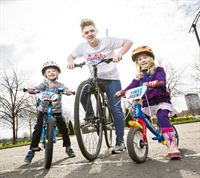