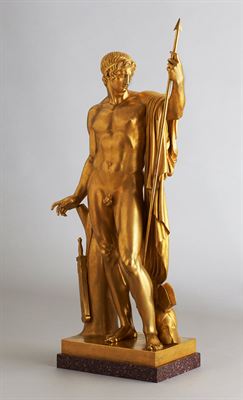 HM Queen Margrethe II of Denmark’s birthday on the 16th of April marks the opening of the new permanent exhibition at Amalienborg Palace (Denmark) of gilt bronze figures by the neoclassical artist Bertel Thorvaldsen from the 1820s. The figures are miniatures of the most renowned works by Thorvaldsen, who was Denmark’s first major international artist.

THE MAGNIFICENCE OF THE ROYAL BANQUETS
The bronzes served as table decorations and added lustre to the royal banquets of Christian VIII and Queen Caroline Amalie of Denmark. Gilt bronze candelabras and centrepieces by the French sculptor Pierre-Philippe Thomire accompanied the bronzes, and they will sparkle together as they did almost 200 years ago; the exhibition design is based on an original plan from the period.

The motifs are all based on Greek and Roman mythology, and the bronzes would inspire the royal guests to indulge in learned conversation based on their knowledge of the ancient world. However, at some point the explicit nudity of the male figures proved too much for the royal guests and their genitalia had to be concealed behind gilt fig leaves. The fig leaves are also exhibited.

THE KING'S PERSONAL COMMISSION
Today, Thorvaldsen ranks as one of the greatest sculptors the world has seen. In his day, Denmark was too small for him and he travelled o Rome in 1796, which was the artistic hothouse of the late 18th century. In Rome he made a name for himself and was commissioned by popes, dukes and other prominent people.

Having studied history and literature and in addition received lessons in drawing, Christian VIII was very interested in art and culture. His Grand Tour lasted four years and it was a must for him to visit Thorvaldsen's studio in Rome. Here he cultivated the idea of having 10 smaller versions of Thorvaldsen’s sculptures carried out in gilded bronze.

The modelling was done by the Italian Pietro Galli (1804-77), who worked in Thorvaldsen’s workshop. In Paris on their journey home the heirs to the throne commissioned the large gilt candelabra and centrepieces with crystal dishes, which were to adorn the gala table together with the figures.


THE SCULPTURES IN THE PAST, PRESENT, AND FUTURE
Until now the sculptures have stood in a small chamber at Rosenborg Castle, where they have been crammed in behind glass in bad lighting, making it difficult to appreciate them. In the new exhibition they will come into their own and once more shine in the space they were designed for.

HM Queen Margrethe’s shares her great interest in art and culture with her distant relative Christian VIII, and it is therefore fitting that the exhibition will open on HM The Queen’s birthday.

The Appartement Hall and the other splendid rooms on the piano nobile are still used as representation rooms, so both the guests of the royal family and the general public will be able to enjoy Thorvaldsen’s bronze figures in the 21st century as well.

The exhibition can be seen on the piano nobile, to which there is daily entry (except for two Mondays in April) from the museum until the 30th of August, after which there is admittance on Saturdays.
Please check our website for opening hours and possible days of closing.