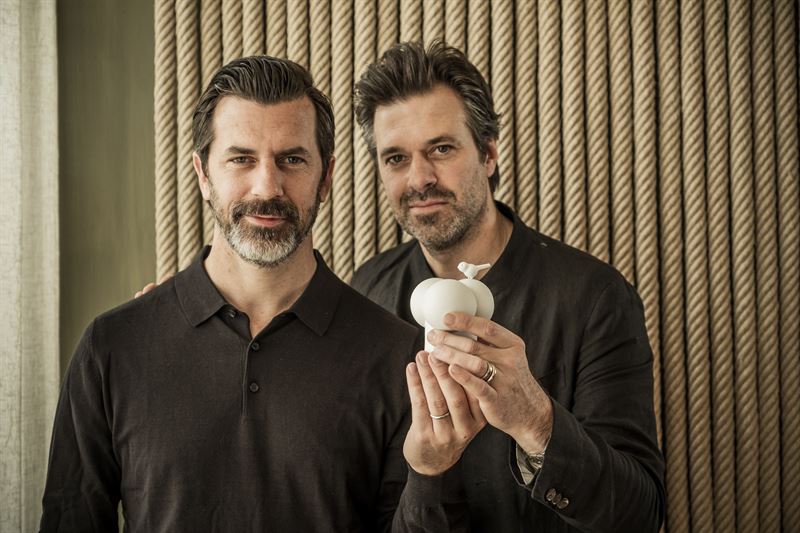 Sergio Herman becomes the first international mentor for «Fundaziun Uccelin». The Dutch top chef will support the foundation of his Swiss colleague Andreas Caminada to foster promising chefs and service talents in order to guarantee the future of gastronomic crafts.

Fürstenau (CH) / Cadzand (NL) March 14th, 2019. «Fundaziun Uccelin was founded to individually foster ambitious talents within the gastronomic industry with the long-term goal to secure highly skilled and passionate professionals for our wonderful craft» explains Uccelin’s founder Andreas Caminada. Since its foundation in Switzerland in 2015, the initial engagement has grown into a global network with over 60 of the world’s most successful restaurants and producers as partners for the foundation’s internship program. Talents who have been accepted for the 20-weeks-scholarship are allowed to choose their individual stages from these partners. By offering this kind of backing for young professionals the foundation creates a unique opportunity for the next generation to gain insights into the global culinary diversity.

«But we are not only providing trainings. We also offering mentoring support and constantly seeking for role models to enhance our ambitions on an international scale» underlines Caminada. For this special task, the Swiss 3-star-chef accomplished to convince Sergio Herman, being one of today’s most appraised culinary entrepreneurs in Belgium and the Netherlands, to support his initiative. Currently Herman is involved in no less than 5 different restaurant projects, including acclaimed dining hotspots Pure C in Cadzand and The Jane in Antwerp. «We are very happy and thankful that Sergio takes the time to engage for Fundaziun Uccelin. He was one of the first chefs who supported us as a partner when we started – and now he will become the foundation’s first international mentor. With his experience and knowledge, Sergio is a perfect ambassador for our industry» states chef Caminada. The official welcome as the foundation’s new mentor took place at Sergio Herman’s restaurant AIRrepublic in Cadzand.

«This initiative is bigger than just a training program for talents. Uccelin’s overall mission is about preserving the beautiful craft of gastronomy.  For the last fifteen years our business sector is confronted with a drainage of young people. Andreas and me heard the alarm bells ringing – both in our own areas and countries – but to turn the tide we need to unite. Uccelin is creating a solution for this problem and I am more than willing to offer my support before our craft becomes extinct» explains chef Sergio Herman his personal motivation to become a mentor for Fundaziun Uccelin and appeals urgently to his fellow colleagues: «We have to work together and by ‘we’ I mean everybody whose career was built upon the craft of gastronomy. Andreas and I know that our jobs gave us so much – they allowed us to chase our dreams and reach our lifegoals. Now it is high time to give back.»

The new cooperation with Sergio Herman will push the foundation’s work to the next level. «Sergio is not only authentic and very successful with his mutual businesses. He is also a highly respected role model for the next generation and connected to our target group due to his various gastronomic projects. That is a big advantage for us as his huge network allows him to identify more talents worth fostering» explains Sarah Caminada, CEO of Fundaziun Uccelin, the most important mission for Uccelin’s new mentor. Herman agrees: «Sharing my skills with younger generations and passing on my experience as a chef and entrepreneur is both: a blessing and a big responsibility. Therefore, it makes me very proud to be on the forefront of this movement. »

About FUNDAZIUN UCCELIN
To sustain today’s top-quality gastronomy, it is essential to nurture young talents in a systematic way. While there are already a number of training opportunities for promising gastronomy professionals, their focus is usually on attaining an academic qualification rather than on expanding the participants’ individual talents. Fundaziun Uccelin aims to close this gap. Its key objective is to provide aspiring chefs and service professionals with an opportunity to expand on their expertise and immerse their insights, so that they can act as ambassadors for their chosen discipline.

Carefully designed curriculum
The foundation provides three specific training programmes – one for promising young Swiss chefs, one for their international peers and one for talented waiting professionals. The foundation also provides scholarships towards further education and training. All three training programmes share the same modular structure, encompassing fundamental skill sets taught over a period of 20 weeks. The 20-week-scholarship program comprises several individual on-site assignments, hosted by a network of selected producers and restaurants.

Supervisory board
The foundation has a supervisory board of five personalities from gastronomy, business and culture. The foundation’s president is Andreas Caminada. Its four other supervisory board mandates are top chef Tanja Grandits from Basel, the artist and photographer Rolf Sachs and the two entrepreneurs Beat Curti and Hans-Peter Strebel. Sarah Leemann is the Managing Director of the foundation, which has its registered offices in Fürstenau, Graubünden.

Applications
Written applications for scholarships can be handed in twice a year, in March and September, via the Foundation’s website, www.uccelin.com. The current application cycle runs until March 30, 2019.