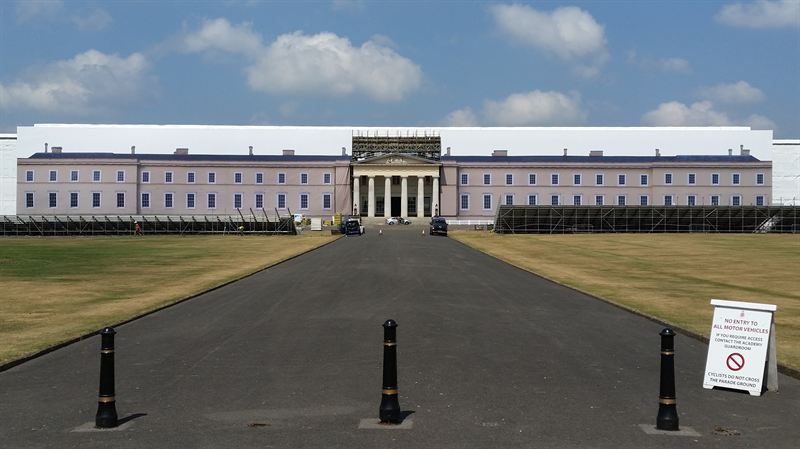 Work has started on Sandhurst’s Royal Military Academy– but its Royal visitors wouldn’t know to look at it!

Passing out parades for officers who have completed their training - attended by members of the Royal Family – will be held in front of the building while the project is underway. To conceal the scaffolding, a specialist fabric façade has been placed over the building, over-printed with a life-size image of how it will look when work is completed.

The ‘Old College’ is currently in use as a teaching facility where cadets train to become Army officers. Built at the beginning of the 19th century, the building is also a museum, featuring gifts from foreign dignitaries and priceless artefacts.

The renovation project, which is being carried out while the building remains occupied, involves the replacement of roof slates and the safe removal of around 3,000 square metres of asbestos from roof voids. It also involves the deconstruction and rebuilding of 58 chimneys, using 1700 tonnes of scaffolding which would reach 3200 kilometres if laid end to end.

The Defence Infrastructure Organisation, which manages the military estate, awarded the £18 million contract to PriDE, a joint venture between Interserve and Scottish & Southern Energy Contracting. The work is due to be completed in May 2016.

“This is a unique building, and this project poses unique challenges - as well as the requirement to maintain operations while the work is done. We will be working closely with our Army customers, PriDE and Interserve to ensure this important work is finished to the high standards this historic landmark deserves.”

Interserve has had to put in place safe systems of work, including the provision of fire rated tunnels to withstand falls and protection around fire exits to facilitate the daily operation of the college which will remain live.

“The volume and complexity of scaffolding required on this scheme are quite a challenge, to say nothing of having the building presentable for passing-out parades! And then there’s the necessity to protect as carefully as possible this historic building and its contents, which are part of Britain’s cultural heritage. Throughout the renovation process, we are safeguarding priceless memorabilia and shielding unique stained glass windows from damage. This project really is one of a kind.”

1) The Defence Infrastructure Organisation (DIO) plays a vital role in supporting our Armed Forces by building, maintaining and servicing what the men and women who serve our country need to live, work, train and deploy on operations.

2) DIO is part of the Ministry of Defence (MOD). It is responsible for managing and maintaining land and properties, as well as providing related support services, to meet the current and future      needs of the MOD and personnel at home and abroad, and to support current operations.