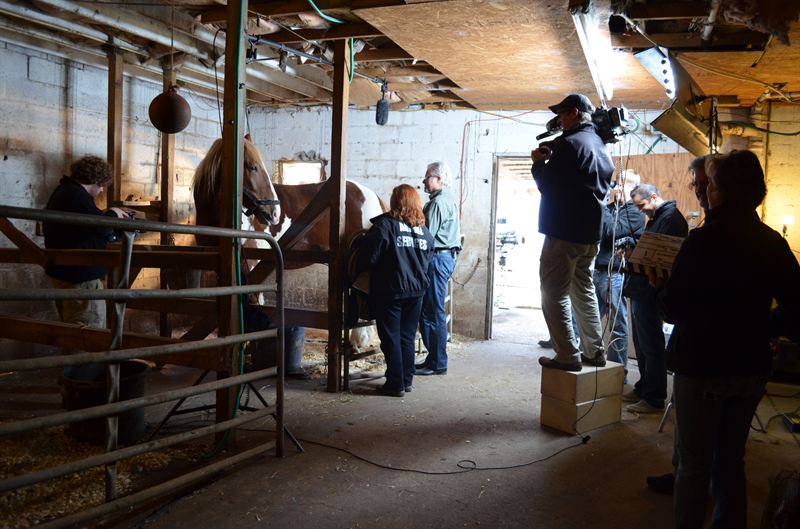 A spiffed-up McKamey Animal and Adoption Center will make its national TV debut early next year, but just putting on a pretty face for the rest of the country is not the ultimate goal.

A local production crew working with a producer/director from the show "Designing Spaces" will wrap up filming today at the McKamey Animal and Adoption Center after spending a week renovating and remodeling the facility. The series of shows -- a total of three is expected -- is set to air in January on Lifetime Television.

The actual work will be completed by Tuesday, according to center Executive Director Karen Walsh.

Producer/director Arash Farsi Farsi said the episodes will focus primarily on the retiling and painting work and also on how the center deals with things such as the animals' anxiety, pet dental hygiene, bloodwork, heartworms and pet insurance.

Farsi and his crew have been filming work crews as they retile and repaint inside the center, as well as gathering footage from around town. He has also been filming the staff, volunteers and doctors at McKamey as they go through their daily routines caring for the dozens of cats, dogs, rabbits and even goats that come through the center.

During a news conference Friday at the center, Farsi and Walsh said that, while some areas of the four-year-old facility are getting remodeled, the focus is less about extreme makeovers and more about what the center does and how it could be done better.

When people around Chattanooga heard that "Designing Spaces" was doing a show here, they wondered why such a new center would need a makeover, Walsh said.

"It's not about that but about fixing and enhancing," she said.

For example, she said, some of the original tile work only covered the floor. The drywalled walls were easily damaged by the animals and also became a home for germs. The new tile work rises several feet up the walls.

In some rooms, for example, the tile runs floor to ceiling and is designed to mimic the mountains surrounding Chattanooga. Crossville Tile donated the tile and Dakota Tile installed it.

Walsh said the work was entirely dependent on the donations provided by people and businesses in the area. She put together a wishlist when she knew "Designing Spaces" was coming and about 20 percent of that has been achieved, she said, but the center benefited from other donations they did not expect or request.

Snapfish photography, for example donated several framed or artistically displayed photographs of center animals, she said, and the center now has new display cages for rabbits and kittens that are safer and easier to transport.

The largest unexpected donations came from several pharmaceutical companies that gave machines the center can use on site to do blood and other lab tests. The center is a training ground for veterinarian technicians and the equipment will greatly enhance their training and help McKamey provide better care, Walsh said.

Barry Courter is associate features editor, entertainment editor and books editor for the Times Free Press. He started his journalism career at the Chattanooga News-Free Press in 1987. He covers primarily entertainment and events for ChattanoogaNow and edits the Sunday books page. Born in Lafayette, Ind., Barry has lived in Chattanooga since 1968.

About Designing Spaces™ Entering its 10th year Designing Spaces™ continues to be one of America’s favorite home improvement shows. The show inspires viewers on decorating ideas, do-it-yourself projects and step by step home improvements to help make every space count and provide solutions to help you enjoy the space you live, work and play in. Designing Spaces™ Family of Spaces includes Think Green Spaces, Kids Spaces and it’s widely popular Spaces of Hope which prides itself on assisting people and places in dire need of a makeover including children’s shelters, animal shelters, military families and more. Designing Spaces™ airs at 7:30am (ET/PT) on Lifetime.