All Mixed Up™ the newest show from the producers of Designing Spaces™ is making waves in the media.

The press is taking notice of the new reality cooking show All Mixed Up™ airing on Lifetime from the producers of Designing Spaces™.  The show airs in a 3 part series format, with each series highlighting a different culinary academy and using the school’s students as the contestants.

Hosted by TV personality and chef extraordinaire Ralph Pagano, All Mixed Up is a unique take on the typical cooking show format.  The Show takes 3 students through a 3 day battle to be crowned “All Mixed Up Champion”.  Using secret ingredients chosen by some of America’s top brands such as Formaggio Cheese, Nestle® and Kozy Shack, the students must create a complete 3 course meal for each of the 3 brands highlighted in each show.

Pagano uses his vast experience as a professional chef, television cooking competition competitor and host to educate, coach and challenge the students while throwing some wrenches in the works to keep them on their toes.

“Cooking School teaches technique…but it can take a lifetime to develop the right palate” said Pagano in a recent feature about the show in the Miami Herald.

Features and reviews have been coming from all over, including the Miami Herald, The New York Post, The Star Tribune and many more.

Series 1 may be finished but the heat is returning as O2 Media and the producers from Designing Spaces have just finished casting and are getting ready to shoot at Lincoln Culinary Institute in West Palm Beach, FL with 3 new hopefuls and 3 more top American brands challenging the students with their chosen ingredients.

The final episode of the first series airs next Friday September 21st at 7:30AM (ET/PT) on Lifetime.  To view past episodes and an interactive recipe book online visit www.allmixedup.tv 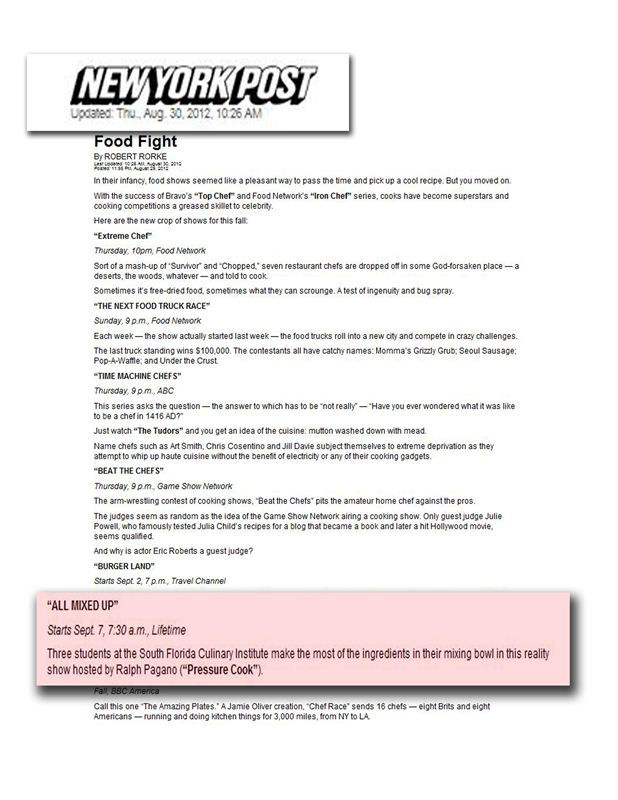 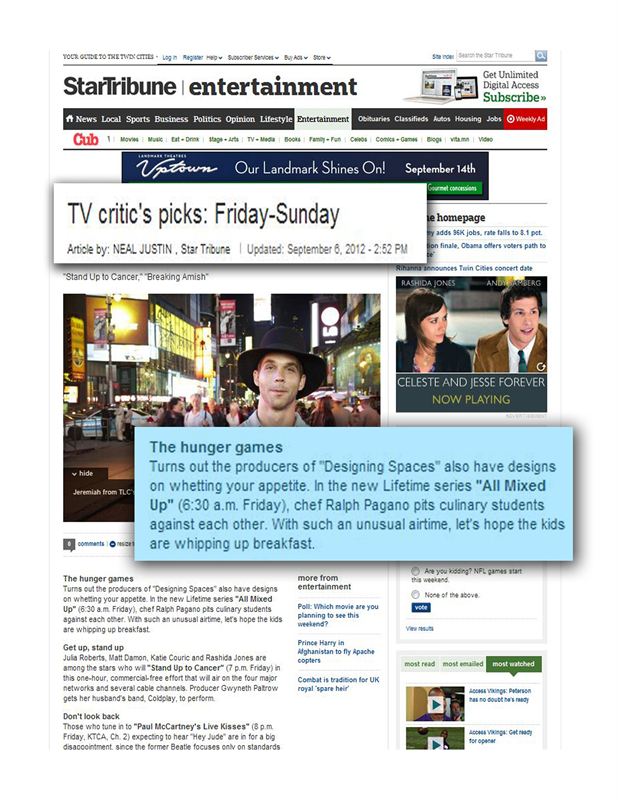 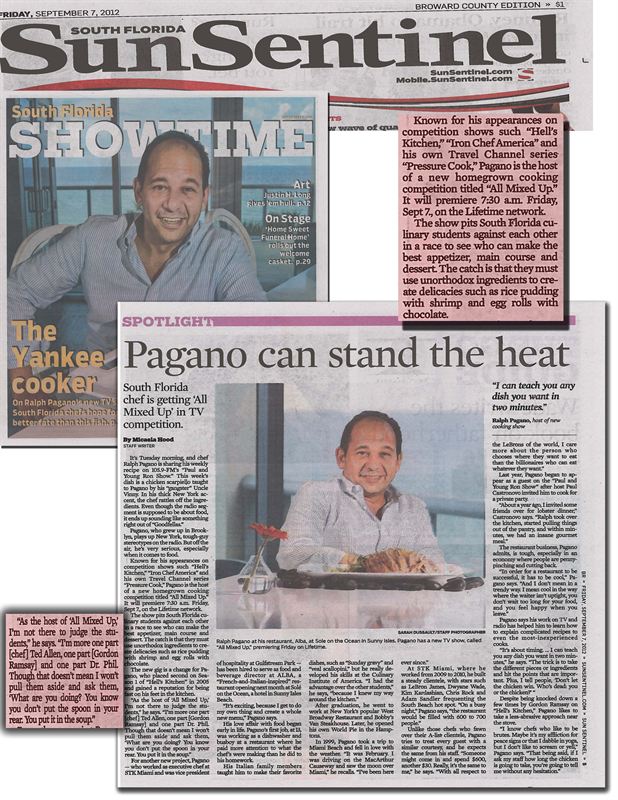 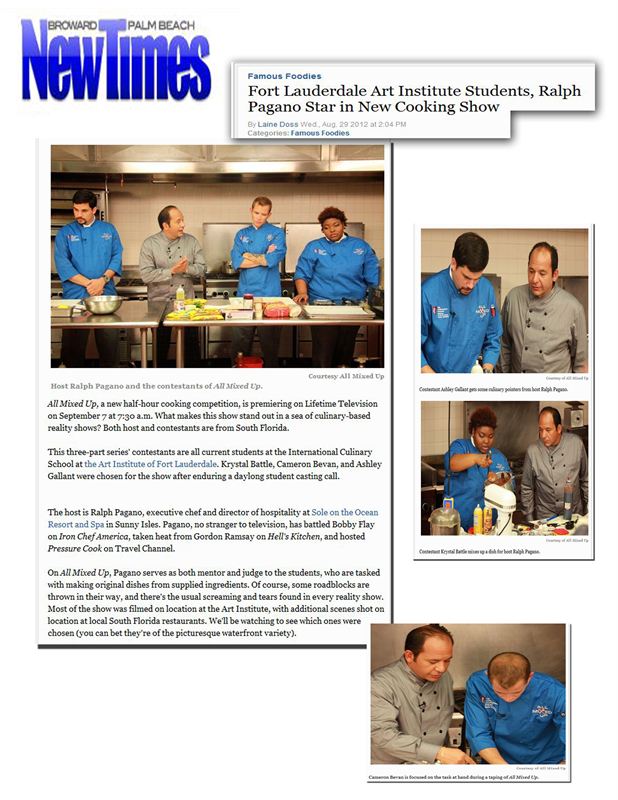 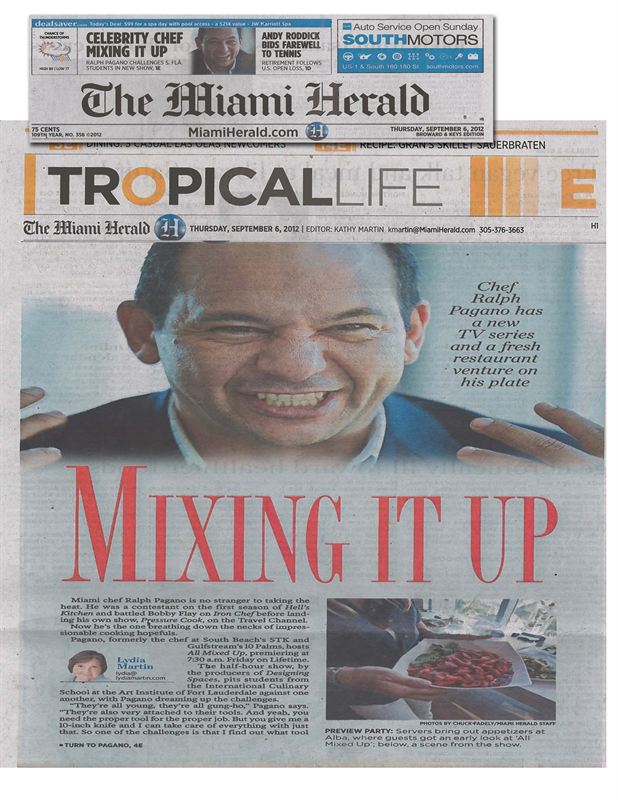 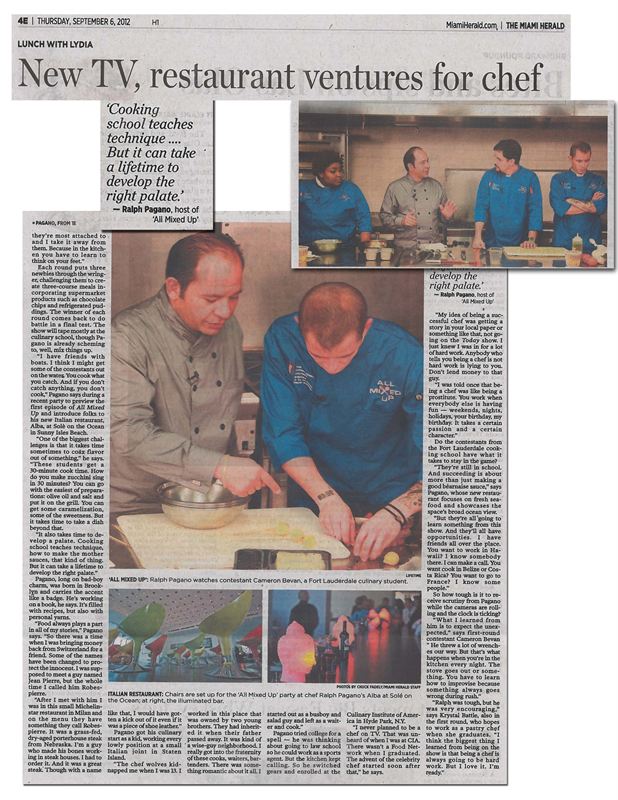 About All Mixed Up

The producers of “Designing Spaces” proudly present “All Mixed Up”, a reality-based cooking series that premiered on Lifetime Television September 7th2012 at 7:30 am (ET/PT).

“All Mixed Up” is a half-hour reality show that combines the perfect mix of ingredients for food competition, food history and culinary adventure. The show is hosted by Ralph Pagano, world renowned chef and culinary celebrity. Three up and coming student chefs compete before a panel of judges by taking American’s favorite brands and turning them into three unique three course meals. The chefs must complete an appetizer, entrée, and a dessert in 30 minutes and will be judged on recipe originality, presentation and taste. Who will win the competition? And who will survive being “All Mixed Up?”

For information please visit us at: http://www.allmixedup.tv

About Designing Spaces on Lifetime Television

Designing Spaces, now in its 8thseason, is the premier home improvement television show airing on the Lifetime network Thursday and Friday at 7:30am (ET/PT).  The show inspires viewers on decorating ideas, do-it-yourself projects, and step by step home improvements to make every space count and to provide solutions to enjoy the space you live in. The “Family of Spaces” television shows include Think Green, Kids Spaces, and Designing Spaces of Hope which all provide great entertainment and solution driven programming for every member for the family.

For information or to view a show visit http://www.designingspaces.tv

About Designing Spaces™ Entering its 10th year Designing Spaces™ continues to be one of America’s favorite home improvement shows. The show inspires viewers on decorating ideas, do-it-yourself projects and step by step home improvements to help make every space count and provide solutions to help you enjoy the space you live, work and play in. Designing Spaces™ Family of Spaces includes Think Green Spaces, Kids Spaces and it’s widely popular Spaces of Hope which prides itself on assisting people and places in dire need of a makeover including children’s shelters, animal shelters, military families and more. Designing Spaces™ airs at 7:30am (ET/PT) on Lifetime. 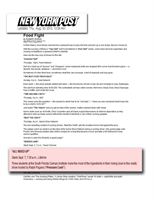 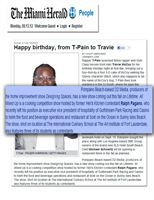 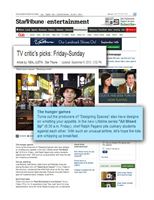 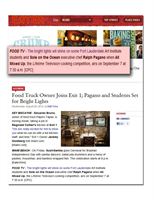 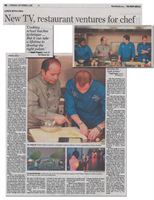 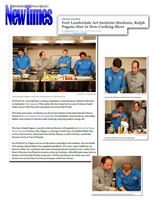 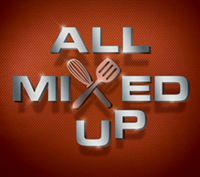 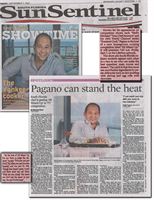 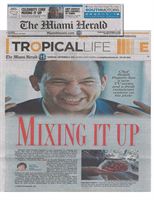