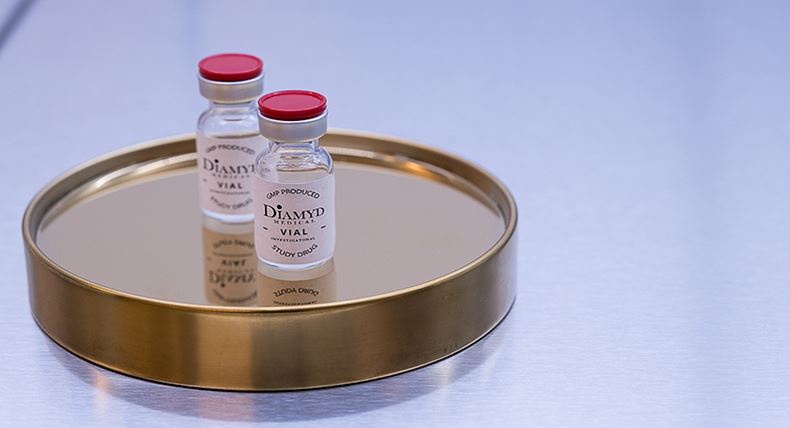 Significant effect of Diamyd® demonstrated in a large predefined patient group, covering about 40-50 percent of all type 1 diabetes patients
Diamyd Medical’s B-share is traded on Nasdaq First North Growth Market under the ticker DMYD B.
Further information is available on https://www.diamyd.com

Comments by CEO Ulf Hannelius
On September 14 we had the pleasure to announce the topline results from DIAGNODE-2, the European multicenter Phase IIb trial in 109 individuals recently diagnosed with type 1 diabetes. The results show, in line with comprehensive insights from previous trials and scientific publications, that the diabetes vaccine Diamyd® (GAD-alum) has a positive and significant disease-modifying effect on the preservation of endogenous insulin production compared to placebo in a genetically predefined patient group. The focus forward into Phase III and beyond is aligned with genetics-based Precision Medicine - targeting the right individual with the right treatment at the right time.

Specifically and importantly, the topline results from DIAGNODE-2 make it clear that to receive a significant treatment benefit with Diamyd® one should target individuals with HLA-type DR3-DQ2. Equally, there seems to be no benefit in individuals that do not present with this HLA type. These results are in line with the large scale meta study that we first announced in December 2019 and later were published this August in Diabetologia. That study showed that based on data from more than 500 patients from three placebo-controlled trials, the HLA-type significantly influences the effect of Diamyd® and a positive effect is seen in individuals carrying the specific HLA type DR3-DQ2.

The notion of targeting individuals with HLA DR3-DQ2 is further supported by a combined analysis of two investigator-initiated prevention trials, DiaPrevIT-1 and DiaPrevIT-2, that we press released in August this year. While the individual trials did not support a benefit of Diamyd® to prevent or prolong time to diagnosis in healthy at-risk children, the combined analysis showed a clear trend that the preventive benefit of Diamyd® is seen in individuals that are positive for HLA DR3-DQ2. We also now know that the three individuals who all received a significant benefit following a fourth intralymphatic booster injection in the pilot trial DIAGNODE-1 were HLA DR3-DQ2 positive.

Furthermore, these results make sense from a scientific perspective. HLA DR3-DQ2 has previously been associated with autoimmunity against GAD, the active component in Diamyd®. This is significant as the HLA region codes for the molecules that bind and present antigens to antigen reactive immune cells, a central mechanism regulating immunity that now is shown to be susceptible for immunomodulation and the target for therapeutic antigen-specific vaccines like Diamyd®.

It should also be emphasized that despite the COVID-19 pandemic, DIAGNODE-2 has not met with any operational disruptions, which is a true testament to the safety and convenience of the treatment as well as to the competence and engagement of the clinics and collaborators involved in the trial. A safe, convenient, and effective disease- modifying treatment is imperative to reach therapeutic and commercial success in the type 1 diabetes field.

Going forward, the detailed results from DIAGNODE-2 will be published in a scientific journal and we are accelerating our design efforts for a pivotal Phase III trial. This trial will incorporate all the knowledge around Diamyd® and especially the HLA aspect and the administration route, and we are planning interactions with the FDA to align the trial design and evaluate potential expedited regulatory pathways for Diamyd®.

To summarize, it has been a truly pivotal year for Diamyd Medical.

Significant events during the fourth quarter

Diamyd Medical received USD 13.9 million in connection with divestment in Companion Medical
In connection with the previously announced acquisition of Companion Medical, Inc. by Medtronic plc., Diamyd Medical received approximately USD 13.9 million, corresponding to SEK 120 million. Depending on achievement of certain future milestones, some additional payments may be possible, and will then be communicated if they occur.

Phase IIb topline results demonstrated a significant treatment effect of Diamyd® in a predefined genetic patient group covering about 40-50% of all type 1 diabetes patients
Diamyd Medical announced the topline results from the placebo-controlled Phase IIb trial DIAGNODE-2, where the diabetes vaccine Diamyd® (GAD-alum) was injected directly into a lymph node in individuals with recently diagnosed type 1 diabetes. In line with previous large-scale analysis of trials involving subcutaneous administration of Diamyd®, the results, encompassing a total of 109 patients, showed a statistically significant effect in the predefined HLA (Human Leukocyte Antigen) group of trial participants. Specifically, this trial demonstrated a preservation of beta cell function at 15 months post-diagnosis, as measured by meal stimulated C-peptide. The primary endpoint, defined as meal stimulated C-peptide in the entire trial population was not met. Importantly, no related severe adverse events were observed in the trial. Based on these results, Diamyd Medical will pursue the HLA restricted responder group in an upcoming pivotal Phase III program.

Analyses of prevention trials and intralymphatic pilot trial with the diabetes vaccine Diamyd® supported a positive trend in genetically defined groups of type 1 diabetes patients
A combined analysis of two previous clinical prevention trials, DiAPREV-IT 1 and 2 in healthy children at high risk of type 1 diabetes, as well as additional insights from the open label pilot trial DIAGNODE-1 in children and young adults newly diagnosed with type 1 diabetes, while not reaching statistical significance, were consistent with the recently published large-scale responder analysis which showed a highly significant and clinically relevant effect of the diabetes vaccine Diamyd® in individuals positive for genotypes that include HLA DR3-DQ2.

Diamyd® is an antigen-specific immunomodulating diabetes vaccine for the treatment and prevention of autoimmune diabetes (type 1 diabetes and LADA, Latent Autoimmune Diabetes in Adults).

Clinical data indicate the potential of the diabetes vaccine Diamyd® to halt or stop the autoimmune destruction of insulin-producing beta cells. The effect is achieved by antigen-specific reprogramming of immune cells by administration of low doses of Diamyd® in superficial lymph nodes.

By maintaining the endogenous insulin production, Diamyd® has the potential to make a significant difference in the daily life of patients as well significantly reduce the complications of type 1 diabetes.

Topline results from the Phase IIb trial DIAGNODE-2 has demonstrated a significant treatment effect of Diamyd® in a predefined genetic patient group.


Remygen® is an oral regenerative and immunomodulatory drug candidate for the treatment of autoimmune- and type 2 diabetes.By stimulating the growth of insulin-producing cells, Remygen® has the potential to reverse the disease progression in autoimmune- and type 2 diabetes. Based on clinical data, Remygen® has also the potential to protect against hypoglycemia by improving the hormonal response.

Remygen® is now being investigated in a clinical Phase I/II trial (ReGenerate-1), where clinical efficacy is evaluated with the aim of optimizing the treatment regimen ahead of registration-based trials.

Type 1 diabetes is a devastating disease which requires daily treatment with insulin to sustain life. The importance of finding a drug that improves the prospects for patients with diabetes is of utmost importance. The effect of intralymphatic administration of Diamyd®, an antigen-specific immunotherapy aimed at stopping the immune system's attack on insulin-producing beta cells in autoimmune diabetes, is evaluated in the Phase IIb trial DIAGNODE-2 and in the Phase II trial GADinLADA.

Remygen®, which aims to stimulate the growth of beta cells in patients with diabetes, is evaluated in patients in a Phase I/II trial.

Trials with Diamyd® in lymph node

A follow-up double-blind randomized clinical trial where Diamyd® is administered directly into a lymph node with oral supplements of vitamin D. The trial encompasses 109 patients from Sweden, the Czech Republic, Spain and the Netherlands, aged 12–24 years who have recently been diagnosed with type 1 diabetes. The 15-month results were presented on September 14, 2020, demonstrating a significant treatment effect of Diamyd® in a predefined patient group. As of autumn 2019, patients who had not yet completed their last visit at 15 months were offered to participate in an extension of the trial for another 9 months. 53 patients agreed to participate in the extension trial and 15 of these patients have already been followed for 24 months. Results of this extended trial should be available in Q3 2021. Coordinating Investigator is Professor Johnny Ludvigsson at Linköping University, Sweden. Diamyd Medical is the Sponsor of the trial.

An open-label, investigator initiated clinical trial where Diamyd® is administered directly into a lymph node with oral supplements of vitamin D. The trial, conducted in Norway and in Sweden, encompasses 15 patients aged 30-70 years diagnosed with LADA (Latent Autoimmune Diabetes in Adults) and not yet on inulin treatment. The aim with the trial is to evaluate the safety of intralymphatic treatment with Diamyd® in LADA patients and to continuously evaluate the immunological and clinical response during a one-year period. Sponsor of the trial is the Norwegian University of Science and Technology with Ingrid K Hals as sponsor representative.

An open-label, investigator initiated clinical trial with Remygen®. The trial includes approximately 36 patients aged 18-50 who have had type 1 diabetes for more than five years with low to non-existing insulin production. Safety and initial efficacy results from the dose escalation section of the trial have paved the way to initiate the main trial and have also demonstrated a potential effect of Remygen® to improve the hormonal response to hypoglycemia. The main trial evaluates whether the insulin-producing cells can be regenerated and if the hormonal response to hypoglycaemia can be improved using Remygen® and the combination of Remygen® and Alprazolam. The trial is led by Professor Per-Ola Carlsson at Uppsala University, Sponsor of the trial.

Manufacturing of GAD65 in Umeå
A new facility for vaccine manufacturing is being set up in Umeå, the Capital of Västerbotten County in Sweden, for the manufacture of recombinant GAD65, the active pharmaceutical ingredient in the therapeutic diabetes vaccine Diamyd® currently in late-stage clinical development The 10 000 square feet site, comprising of clean rooms, laboratory facilities and office space, will facilitate full control, predictability and scalability of the manufacturing technology of the active ingredient.

About Diamyd Medical
Diamyd Medical develops therapies for type 1 diabetes. The diabetes vaccine Diamyd® is an antigen-specific immunotherapy for the preservation of endogenous insulin production. Significant results have been shown in a genetically predefined patient group in a large-scale metastudy as well as in the Company’s European Phase IIb trial DIAGNODE-2, where the diabetes vaccine is administered directly into a lymph node in children and young adults with newly diagnosed type 1 diabetes. A new facility for vaccine manufacturing is being set up in Umeå for the manufacture of recombinant GAD65, the active ingredient in the therapeutic diabetes vaccine Diamyd®. Diamyd Medical also develops the GABA-based investigational drug Remygen® as a therapy for regeneration of endogenous insulin production and to improve hormonal response to hypoglycaemia. An investigator-initiated Remygen® trial in patients living with type 1 diabetes for more than five years is ongoing at Uppsala University Hospital. Diamyd Medical is one of the major shareholders in the stem cell company NextCell Pharma AB.

Further information is available on https://www.diamyd.com.

The information was submitted for publication, through the agency of the contact person set out above, at 08.15 CET on October 7, 2020.