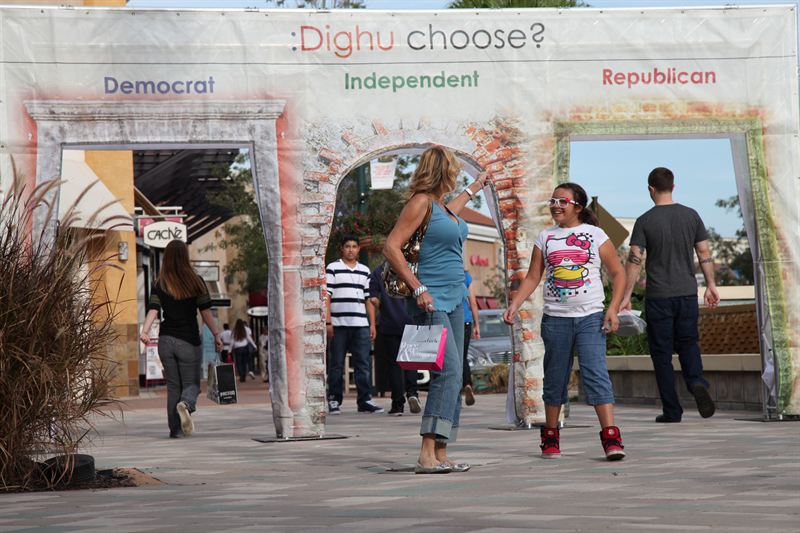 Dighu™ Doors Show the Voice of Choice for Florida is … Republican

For Immediate Release (Tampa, FL) November 6, 2012 -- In the hotly contested state of Florida, a fun, and innovative new way to declare voter choice hit the streets, and the results indicated a preference for the Republican candidate. Digital Humanity and The Shops at Wiregrass teamed up to offer a visually compelling way that allowed voters to give Voice to their Choice by walking through the unique Dighu™ Doors.

The method for determining the Sunshine state’s choice was a simple gateway that asked voters, "Did You (Dighu) Choose?” People were given a choice to walk through doors marked Republican, Independent or Democrat. This new form of street polling offered a cool way to choose in this year’s hotly contested election. After nearly three days of tabulating party preference, the Dighu Doors determined that Florida is swinging toward Republican. The vote tally as of 5:00 pm Wednesday:

The Dighu Doors set up at The Shops at Wiregrass just outside Tampa, FL, and were open for voicing a choice between Sunday, November 4 through Tuesday November 6, 2012.  For those looking to add their opinion after the election, the Dighu Doors will remain open through Wednesday, November 7.

The idea was the brainchild of DigitalHumanity.com, “Dighu” for short, a mobile and web social media site that invites a "voice and choice for humankind." Dighu is a place for people to share good deeds and support non-profit organizations of their choice. The Dighu Doors were originally scheduled to gauge public opinion in New York City and Boston, but Hurricane Sandy blew those doors shut, and opened a new door to keep them right in the home state of Florida

Robert Christianson, Co-Founder of Digital Humanity says, “The Dighu Doors are a great place to be seen and heard, at a moment in history where it matters most. They offer an open invitation to everyone to make a statement, and share it with their friends through social media.”

“We knew that Florida, like the Election in 2004, would be at the heart of deciding the leadership of our nation for the next four years. This was a fun and meaningful way to celebrate your candidate of choice,” said Debbie Detweiler, The Shops at Wiregrass.

Digital Humanity (Dighu.com) helps link people and brands with humanitarian causes and ideas. The new web and mobile site is scheduled to open doors on December 21st, 2012. In the interim, anyone who visits www.Dighu.com now, will learn more.