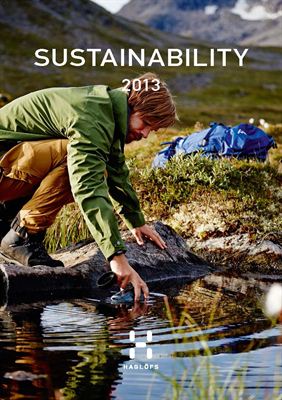 Awareness and responsibility are long-established watchwords for Haglöfs. Issues such as the environment, labor and human rights have been parameters throughout the years of Haglöfs’ modern development. The Company was quick to acknowledge that, like many other companies, its operations have an effect on the environment – both positive and negative.

Five years ago, in 2008, Haglöfs made a strategic decision to integrate sustainability into its business development. The decision was based on two objectives working in tandem – to ensure long-term profitable growth and at the same time to contribute towards a sustainable society. Since then, Haglöfs’ business concept and vision have contained a clear definition of the Company’s position on sustainability issues. Haglöfs has also formulated a number of sustainability targets, the current ones applying to the period 2013-2015.

* Haglöfs decides to label products that are most advanced in terms of sustainability with the Company’s own Take Care symbol, which allows end consumers to make an active choice in the store.

* Haglöfs decides that, from the 2016 season, all products will be developed as Take Care products and that anything else will be considered an exception.

* Haglöfs appoints sustainability managers at all its Subsidiaries around the world.

* Haglöfs joins (as the only consumer brand) the major SUPFES research project and is participating in efforts to find alternatives to perfluorinated substances.

* Haglöfs conducted four Fair Wear Foundation inspections. At the end of the year, 79 percent of Haglöfs’ total production volume at its manufacturers’ production facilities had been inspected, meaning that the target of 90 percent is within reach.

* Haglöfs is participating in a development partnership with OrganoClick and the University of Borås, aimed at producing fluorocarbon-free water repellent treatment.

Haglöfs’ newly released Sustainability Report 2013 can be read in full by downloading the attached PDF.