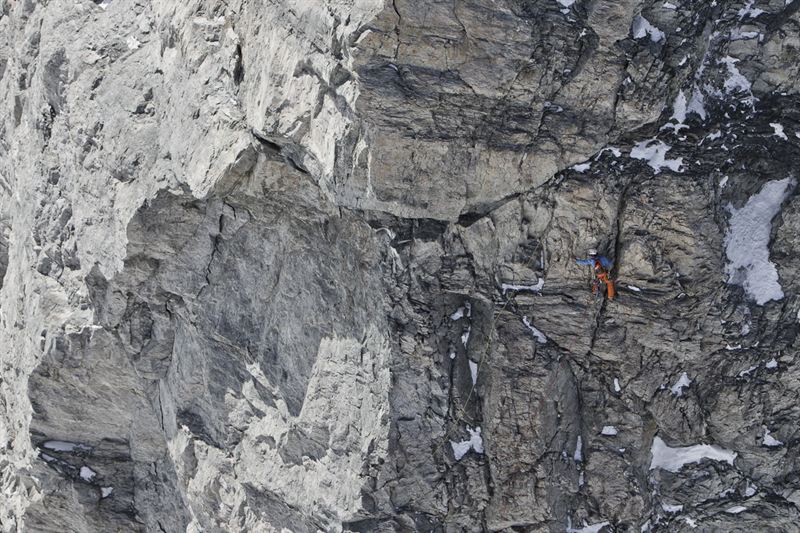 Lugano, Switzerland, April 14th, 2011: The North Face®, the world’s premier supplier of authentic, innovative and technically advanced outdoor apparel, equipment and footwear, announces the successful opening of a new route on the Italian face of the Matterhorn during a solo climb in original alpine style by Italian mountaineer and The North face® athlete, Hervé Barmasse, on April 8th, 2011.

Taking a previously un-climbed route via the Picco Muzio peak (4,235m) in the Aosta Valley, the first 500 metres covered a steep, icy couloir, followed by 700 metres of rotten, crumbling Matterhorn rock, which made the ascent particularly difficult. Despite 60km/hour strong winds, fair, dry cold weather prevailed throughout the five days spent alone on the wall.

“When I reached Picco Muzio, all the stress and the fear of not making it or dying under a rock fall suddenly disappeared; it was just joy and peace of mind. I was aware that something hard and unique had happened, but my great happiness was the fact that I didn't have to climb that rotten and crumbling rock anymore. Above my helmet there was only the sky and the first stars of the night,” stated a relieved Barmasse.

“By partnering this project we wish to get people closer to the mountains and its natural beauties, whilst spreading the alpinist culture of the Valle d’Aosta Region. ‘Exploring The Alps’ will take the mountaineering world back to the authentic spirit of alpinism, in the places where it was born,” explained Aurelio Marguerettaz, Head of Tourism, Sport, Trade & Transport, Aosta Valley Region.

Barmasse’s Matterhorn ascent is part of a trilogy of climbs within The North Face® expedition, Exploring The Alps. The project comprises three new routes, up three of the highest mountains in the Alps, in three different ascent styles, with the aim to push the limits of mountaineering in the Alps where alpinism was born.

The Matterhorn (4,478m) lies on the Swiss-Italian border overlooking Cervinia, Aosta Valley and Zermatt in the Swiss German canton of Valais.

Follow expedition highlights and athlete information on the following links:

About The North Face®

The North Face®, a division of VF Outdoor, Inc., was founded in 1968. Headquartered in San Leandro, California, the company offers the most technically advanced products in the market to accomplished climbers, mountaineers, snow-sport athletes, endurance athletes, and explorers. The company's products are sold in specialty mountaineering, backpacking, running, and snow-sport retailers, premium-sporting goods retailers and major outdoor specialty retail chains. Additional information about The North Face® can be found on the company's website, www.thenorthface.com.