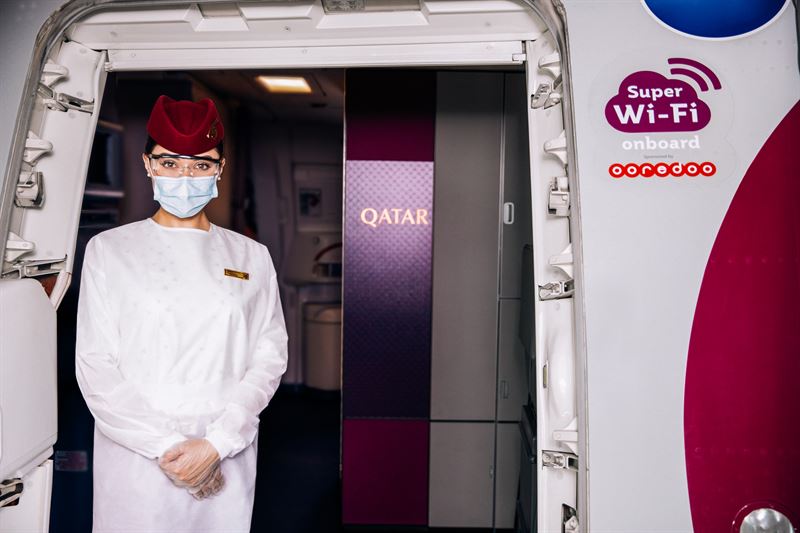 Airbus A350-900 aircraft A7-ALC becomes Qatar Airways’ 100th aircraft to be fitted with high-speed Super Wi-Fi, which has connected millions of passengers since 2018

The airline is rolling out its Super Wi-Fi service across its young fleet of modern, fuel-efficient aircraft

DOHA, Qatar – Qatar Airways is celebrating the launch of its 100th aircraft to feature high-speed ‘Super Wi-Fi’ connectivity, enabling passengers to stay in touch with families, friends and colleagues while on board using the fastest broadband service available in the sky. With its 100th Super Wi-Fi enabled aircraft, Qatar Airways now offers the largest number of aircraft equipped with the most superior high-speed broadband on board in Asia, the Middle East and North Africa.

Airbus A350-900 aircraft number A7-ALC became the 100th member of the Qatar Airways fleet to feature the high-speed Super Wi-Fi service using the award-winning GX Aviation technology from global mobile satellite communications provider, Inmarsat. The service is being rolled out across the airline’s fleet and since its launch in 2018 has enabled millions of passengers to browse the internet, check social media, stream videos and more whilst relaxing on board.

Qatar Airways passengers on flights fitted with GX Aviation can receive up to one hour free access to the Super Wi-Fi service, with the ability to purchase full-flight access if more online time is needed. To honour the loyalty of its valued Privilege Club members, Qatar Airways is offering them up to two complimentary Super Wi-Fi vouchers when they book online at qatarairways.com/SuperWiFi between 9 September and 1 October 2020. Other passengers can take advantage of this exclusive offer by signing up to Privilege Club using the enrolment code SUPERWIFI. Terms and conditions apply.

Qatar Airways Group Chief Executive, His Excellency Mr. Akbar Al Baker, said: “As a leader of innovation within the global aviation industry, Qatar Airways already operates one of the youngest and most technologically-advanced fleet in the skies. Where other airlines are reducing their wi-fi offering, Qatar Airways is expanding it.

“With connection to our loved ones and friends now more important than ever during these challenging times, we are delighted to work with Inmarsat and its GX Aviation technology to bring high-speed Super Wi-Fi broadband to passengers on board our fleet as part of Qatar Airways’ exceptional five-star service. We are also pleased to extend full-flight Super Wi-Fi connectivity to our loyal Privilege Club members across the globe.”

Inmarsat Aviation President, Mr. Philip Balaam, said: “Qatar Airways is world renowned for offering a superior onboard experience, which is enjoyed by millions of loyal passengers across the world. We are pleased that our GX Aviation inflight broadband has become such an important component of that experience on the airline’s extensive fleet. Feedback from passengers has been hugely positive and now, with the service being available on 100 aircraft, even more can enjoy the best connectivity in the skies.”

A multiple award-winning airline, Qatar Airways was named ‘World’s Best Airline’ by the 2019 World Airline Awards, managed by Skytrax. It was also named ‘Best Airline in the Middle East’, ‘World’s Best Business Class’, and ‘Best Business Class Seat’, in recognition of its ground-breaking Business Class experience, Qsuite. It is the only airline to have been awarded the coveted ‘Skytrax Airline of the Year’ title, which is recognised as the pinnacle of excellence in the airline industry, five times. HIA was recently ranked “Third Best Airport in the World”, among 550 airports worldwide, by the Skytrax World Airport Awards 2020.