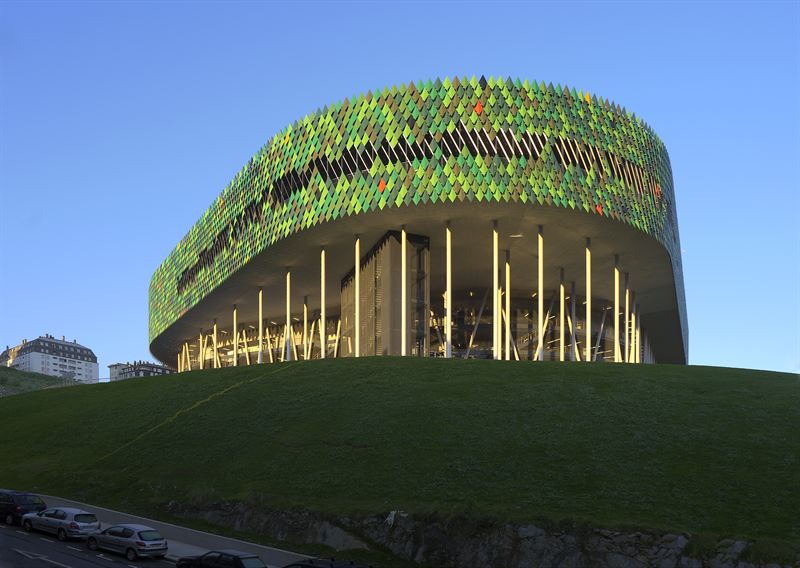 Bilbao Arena sports centre, the work of architects Javier Pérez Uribarri and Nicolás Espinosa Barrientos, boasts a unique façade, designed in the semblance of a tree.

Located in the Bilbao neighbourhood of Miribilla, it is built on ground that slopes steeply, dropping 46 m across a distance of 200 m from one corner to the other. The building covers 30,808 m2 and, according to the architects’ description, stands upon “tree-like pillars that hold the metallic structure to the façade, with lacquered steel leaves in a variety of colours to provide an air-permeable covering that conceals all the premises’ air-conditioning equipment from view”. It comprises two very different spaces. The first has a basketball court and capacity for 8,500 people. The second space is smaller, and conceptually was designed in the form of a rock, with textured concrete panels. Across different levels it houses gyms, a swimming pool and parking. Its interior is coated with moss green panels, in line with its tree-like surroundings.

The spaces are organised so that the Bilbao Arena stadium is in the upper part, with the entrances distanced from nearby homes to avoid disturbances from the potentially noisy Bilbao Basket supporters. The sports centre is found in the lower part.

The Bilbao Arena’s ingenious façade was created to meet the constraints of its budget and for lower energy consumption. The walkway areas are open to the outdoors and the façade is fortified by a mesh of galvanized steel, similar to that used for retention of motorway embankments. As such, the areas where people move about have an outdoor atmosphere, with no need for ventilation or climate control. Furthermore, there is greater evacuation safety in the event of a fire. When a spectator opens the stadium gate they are immediately in the street. Thanks to the high altitude of the land and their crosscutting nature, the walkways also offer great views over the city.

The interior is coated in its entirety with Minionda corrugated sheet metal, which can be perforated, galvanized or lacquered depending on the area, and with rock wool. The architects have thus designed an anti-vandal environment with strong capabilities in terms of sound absorption, making loudspeaker announcements perfectly intelligible.

As for the sports centre, it has a swimming pool, gyms and complex management offices. The divisions between the separate sports areas and their connection with the swimming pool were achieved using Wicona’s WICTEC 50 curtain wall system. This system offers infinite combinations and possibilities in terms of both stick façades – with different interior and exterior looks – and modular façades. Thanks to the creation of these glazed connections between the different areas, users can enjoy full views of the interior.

Also worthy of mention is “the large skylight set in one corner of the swimming pool, which lets in natural light to illuminate the green panels, with an effect that is reminiscent of the greenish light seen when diving in rivers or cave pools. The roof of this sports centre – of this rock – is populated by plants and greenery, and works as a cistern to store rainwater. The plants then take in the water through capillary action, meaning they need not be watered”.
Another feature to consider, relating to the recycling of energy resources envisaged in this project, is the way the water from the swimming pool is used. Current laws state that around 5% of the water must be renewed each day; instead of letting this water go to waste, it is stored in a cistern in the basement and then used by the vehicles that clean Bilbao’s streets. 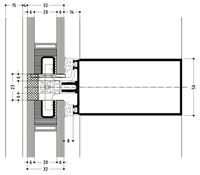 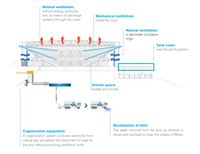